Notes: Orazio Gentileschi (fig. 1) is rightly praised for his lyrical and gentle interpretation of the caravaggesque idiom, as well as his meticulous depiction of the sheen and texture of fabrics, which he approached with the sensitivity of a still-life painter. An aspect of his work that is not praised enough, however, is his psychological insight, no doubt because so few of his extant paintings capture deep emotion and inquisitiveness in quite the same way as the present depiction of a lady, who looks back at us so hauntingly. It is at the same time ethereal and psychologically penetrative, both other-worldly in its beauty and yet evidently describing a real person. Several sources mention that Gentileschi painted portraits while in England, but none alas has survived. 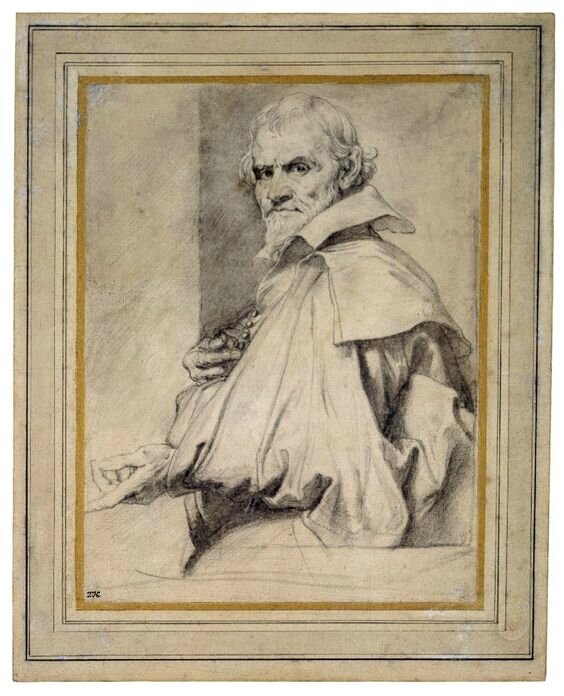 Gentileschi counted among his patrons the leading collectors of his time as well as several European monarchs. The present panel was painted during the first half of the 1630s, while the artist was working at the court of King Charles I of England (fig. 2), who is recorded as having acquired the work by 1636. Gentileschi's presence and success at the court caused some resentment and in 1627 a group of English painters, no doubt envious of the royal pension Orazio was awarded, drew up a petition to present to the king in which they complained that too many foreign artists, among them Gentileschi, were stealing their work. Orazio had two faithful allies though, for the Duke of Buckingham was a loyal patron and Queen Henrietta Maria was very fond of his work. Indeed, one of his key commissions during his time at the English court was the Allegory of Peace and the Arts for the Queen's House in Greenwich, now installed at Marlborough House, London. Joseph and Potiphar's wife, again painted in London and today at Hampton Court, was also destined for the Queen's House. Gentileschi had previously worked at the French court in Paris as well as for the leading nobility in Genoa. One of his most important commissions there, painted for the Sauli family in 1615, was the magnificent Danaë (fig. 3) sold in these Rooms on 28 January 2016, which today hangs in the J. Paul Getty Museum in Los Angeles with its pendant, a Lot and his Daughters. The third picture in the set is a Penitent Magdalene in a private collection. On Orazio’s death in 1639 he was given the singular honor of burial in the recently completed Catholic Chapel designed for Queen Henrietta Maria at Somerset House in London by Inigo Jones. The present painting, one of only two surviving works by the artist on panel, is unquestionably the one recorded in Abraham van der Doort's inventory of the collection of the King, drawn up between 1637 and 1639: a picture "done by Jentellesco" is listed, "uppon a thick board the Picture of a woeman with her left breast naked her right breast covered with a part of her Smock. In a black frame: i f[oot] 10 - i f[oot] 5 [56 by 43 cm]." To put the matter beyond any doubt, the inventory also notes that the light falls from the right. The panel must thus have been reduced at some stage in its history, predominantly along the lower edge, perhaps by one of its previous owners who had an over-keen sense of decorum.

Van der Doort notes that the picture was purchased from Orazio by Charles, and not directly commissioned, as one might have assumed. Perhaps it was therefore a work that the artist kept for himself and used as a basis for some of his larger works. As Ward Bissell notes (see Literature 1981), similar female figures, seen either from the front or back and only partially clothed, can be found in several of Orazio's paintings from the late 1620s onwards, including, for example, in the Finding of Moses, in a UK private collection and on loan to the National Gallery in London, and Lot and his daughters, in Bilbao.1

Charles was certainly pleased with the painting for it hung in a small room between the his withdrawing chamber and a long gallery. Following the King's execution in 1649, Parliament ordered the sale of the King’s goods and personal estate to pay off his debts. A group of eleven loyal puritan trustees were appointed to oversee the process and removed the Royal collections, including nearly 1,300 paintings, from the Royal palaces to Somerset House for sale. It seems the liquidation was badly organised and by May 1650 only 350 paintings had found new owners. Accordingly, Parliament decided to pay off the King’s debts in kind. The trustees prepared a list of 970 of the King’s non-delinquent (i.e. puritan) creditors and unpaid servants and divided them into fourteen ‘dividends’ or syndicates. Each syndicate was led by a prominent businessman and each awarded treasures from the Royal collection valued at £5,000. One of the businessmen who took advantage of this opportunity was Robert Houghton of Southwark in London, "gentleman and brewer to the late King." Houghton was a staunch puritan and a financial sponsor of the Massachusetts Bay Colony. He was an early visitor to the sale of the King’s goods at Somerset House and established himself as a broker for art sales to the Spanish Court. One of his most significant purchases was a set of tapestries, Raphael’s Acts of the Apostles, woven in gold and silver thread, which had been a gift to King Henry VIII from Pope Leo X. Houghton brokered their sale to the Spanish Ambassador, Don Alonso de Cárdenas, for the princely sum of £4,429 (these tapestries were destroyed in a bombing raid on Berlin in World War II).

Robert Houghton was appointed head of the Third Dividend and applied by lottery for an allocation of the late King’s property for the creditors whom he represented. He secured 51 paintings for his syndicate on October 23, 1651 along with an allocation from the King’s wardrobe which included "the loose sable fur lining from a cloak, the deer coloured satin coat lined with rich fur and the gown of sad coloured satin, fur lined and edged with sable tails." A number of dealers from continental Europe were only too happy to relieve junior members of the syndicates of artworks from their allocation; one such was the artist David Teniers who as agent for the Hapsburg Archduke Leopold-Wilhelm secured 40 paintings and ten tapestries from the Dividends in a single week in October 1651 at a cost of nearly £7,000.

The present work, described as a Naked Woman, was one of those acquired by Robert Houghton. It is not specifically mentioned in Houghton’s will but it is possible that it passed to his daughters on his death in 1657. Unlike many of the late King's other pictures, the present work does not seem to have been returned to the Royal Collection after Charles II's Restoration and indeed it did not resurface until the 1930 exhibition in London, when it belonged to Colin Agnew of London.