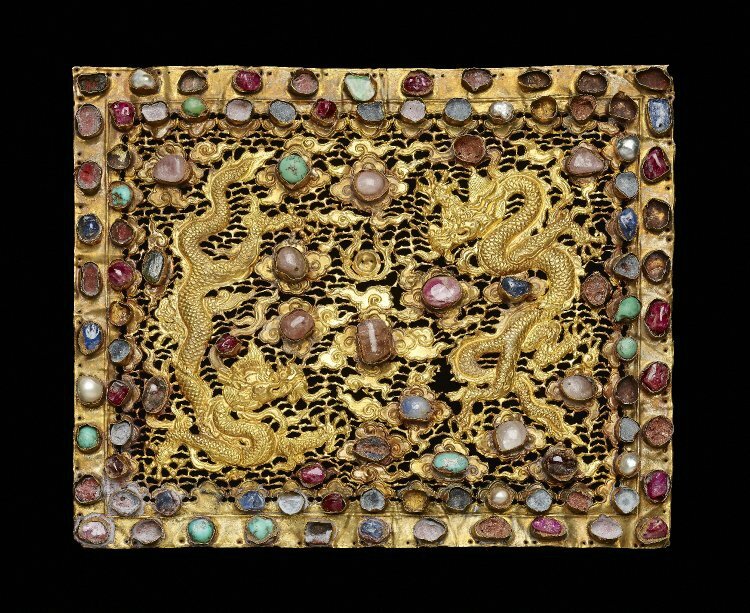 decorated with two dragons and a flaming pearl among clouds. Two rows of inlaid semi-precious stones frame the dragons. Both plaques are pierced around the edge for attachment to a pillow. Worked in relief with chased detail and openwork, and inlaid with semi-precious stones.

Notes: The plaques are pierced around the edge for attachment to a robe, probably for imperial use. Because they were regarded as the most valuable materials, gold and silver were limited in their use by Ming sumptuary laws. Such plaques can be seen as high-quality versions of embroidered rank badges. They are superb examples of early Ming jewellery.Michaelson 2006:

From 1652 all civilian and military officials were required to wear rank badges, displayed on three-quarter-length dark overcoats. These badges were smaller versions of the textiles decorated with birds and animal designs that had been applied directly or woven into robes during the Ming dynasty. In the Ming and Qing dynasties the imperial nobility wore round badges (representing heaven) decorated with dragons, while civil officials wore square ones (representing the earth) displaying different types of birds, according to their rank. Military officials wore square badges displaying animals, symbolizing courage. Ming emperors and their immediate family wore badges bearing dragons while the empress wore a phoenix, but in the Qing dynasty women wore the same badge as their husbands. This gold garment plaque, one of a pair, can be regarded as a high-quality version of the cloth rank badge. It was probably made for imperial use, because in the Ming dynasty only the emperor could use items decorated with five-clawed dragons.