A blue and white jardinière, Transitional period, circa 1640-1650

A blue and white jardinière, Transitional period, circa 1640-1650 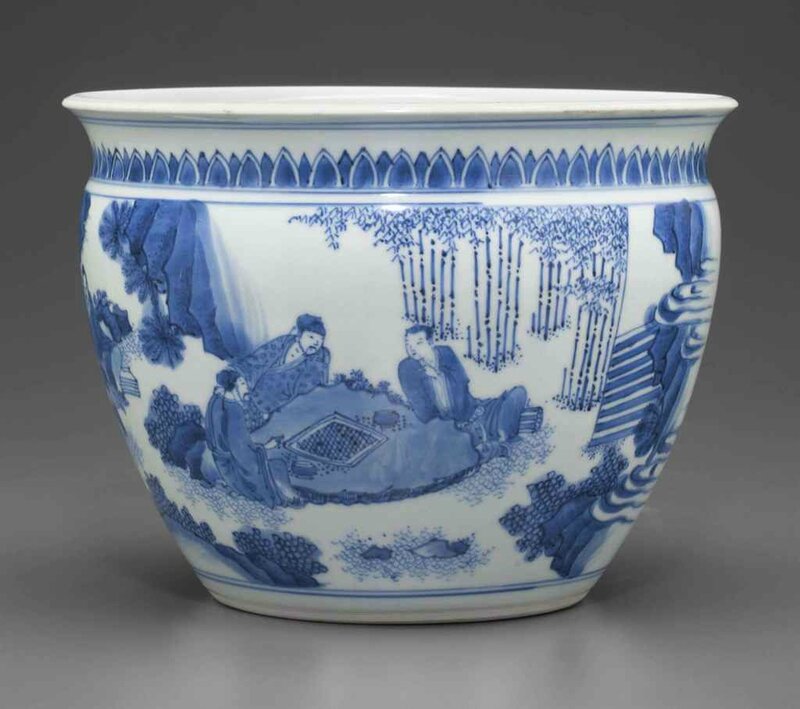 The deep jardinière is decorated on the exterior in vibrant tones of cobalt blue with a continuous scene of ‘The Seven Sages of the Bamboo Grove’. The figures are variously shown in conversation, reclining at leisure, enjoying a game of weiqi, playing the qin, and appreciating a scroll painting, all beneath a band of pointed leaves. The flat base is unglazed. 8 3/8 in. (21.3 cm.) diam. Lot 3555. Price Realized $87,500

Notes: The subject of the decoration on this striking jardinière is that of The Seven Sages of the Bamboo Grove. The Seven Sages were somewhat eccentric scholars who are believed to have met in a bamboo grove in Shanyang, now in Henan province, in the 3rd century AD. The period of some 400 years following the fall of the Han dynasty in AD 220 was one of political and social chaos, and the Seven Sages became famous for their reactions to the world in which they found themselves – rejecting certain aspects of both Confucian and Daoist teaching. They are indelibly linked to the Neo-Daoism of the Wei-Jin period (AD 220-420). Stories about the Seven Sages and others of similar mind are recorded by Liu Yiqing (AD 403-44) in the Shishuo xinyu (New Examples of Contemporary Tales).

The Seven Sages attempted to remove themselves from politics and concentrate on leisure activities such as music and poetry, as well as philosophical discussion with those of like mind. They were also known for their prodigious consumption of wine. They became symbols of the struggle of scholars against corrupt political practices, dynastic usurpation, restrictive Confucian rules of propriety, and magical Daoism. Thus in the 17th century they became models for the Ming dynasty yimin (leftover subjects) and were popular subjects in the arts of the 17th century, when, as Julia Curtis has noted, portraits of celebrated men of letters of the past frequently appeared on porcelains (Julia Curtis, ‘La porcelaine chinoise de Transition’, La porcelaine chinoise de Transition et ses influences sur la céramique japonaise, proche-oriental et européenne, Geneva, 1998, no. 8). Dr. Curtis has also pointed out that within a century of their own life-times, the Seven Sages of the Bamboo Grove “had become role models to the Chinese specifically for resisting the tyranny of a usurping dynasty” (Julia Curtis, ‘Decorative Schemes for new markets: the Origins and Use of Narrative Themes on 17th-Century Chinese Porcelain’, International Ceramics Fair and Seminar, London, 1997, pp. 20 and 22 and fig.4). They were seen as heroes who “had resisted the political and moral pressures of their times” (ibid.). This theme was a popular motif in many different media, including jade, bamboo, porcelain and painting, such as the handscroll by Chen Hongshou (1598-1652), sold at Christie’s Hong Kong, 29 November 2009, lot 816. (fig. 1)

The group was composed of Xi Kang, Liu Ling, Ruan Ji, Ruan Xian, Xiang Xiu, Wang Rong and Shan Tao. Often considered the leader of the group, Xi Kang, (AD 223-262), also known as Ji Kang, is depicted on the jardinière playing the guqin with his back against a large rock. The bamboo grove in which the group met was reportedly near his home. In addition to being a philosopher and author, Xi Kang was a skilled exponent of the guqin and composed music for that instrument. Having defended a friend against false charges, and fallen foul of Zhong Hui, a follower of the Sima clan, Xi Kang was sentenced to death by Sima Zhao. Just before Xi Kang’s execution, he asked for his qin and played the masterpiece known as Guangling san, but left no record of the melody.

Commentaires sur A blue and white jardinière, Transitional period, circa 1640-1650