An inscribed and dated blue and white jar and cover, Chongzhen period, dated 1644

An inscribed and dated blue and white jar and cover, Chongzhen period, dated 1644 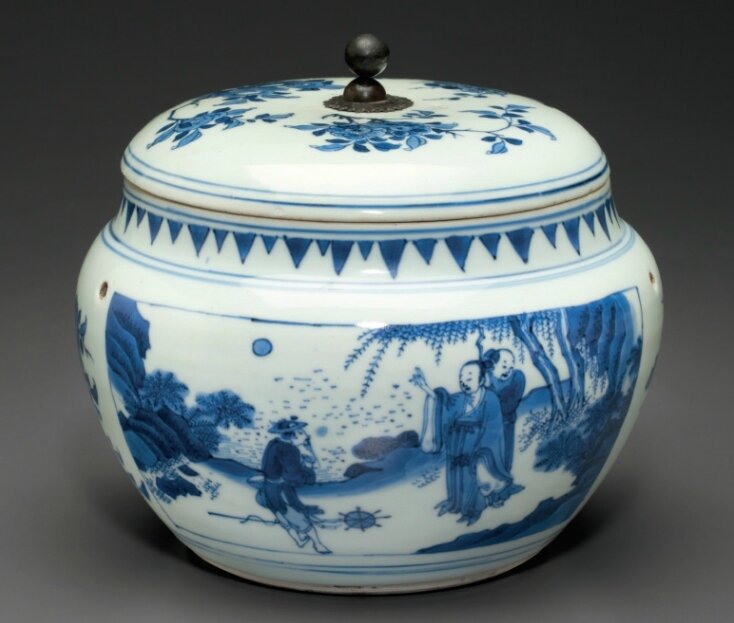 The compressed jar, with short neck, is decorated on one side with a panel containing a scene from the ‘Peach Blossom Spring’ in which the fisherman speaks to a sage and his servant. The other side is decorated with a panel containing a long inscription from a poem entitled ‘Peach Blossoms at the Qingquan Temple’ written by the Song-dynasty poet Xie Fangde (1226-1289), followed by a cyclical date, jiashen, corresponding to 1644, and a seal that reads Koujiao Shanren (‘The Mountain Man who Knocks the Buffalo’s Horn’). The jar is pierced with two holes on either side between the panels for attachment of metal handles. The domed cover is decorated with peony and prunus branches surrounding the metal knob which is secured through a hole in the center. The flat base is unglazed. 7 ¾ in. (19.7 cm.) diam. Lot 3508

Notes: The theme of the decoration on this lidded jar is one which would have greatly appealed to the literati – poetry and patriotic loyalty. The image on the jar refers to Peach Blossom Spring (Taohua yuanji) the famous poem by Tao Yuanming (AD 365-427). The story goes that in the Taiyuan period (AD 376-396) of the Jin dynasty there was a fisherman from Wuling in Hunan province who one day followed the stream in his boat for so long that he forgot how far he had gone. Suddenly he came to a place where blossoming peach trees were crowded along both banks of the stream. The fisherman followed the stream to its source at the foot of a mountain, where both the stream and the peach trees came to an end. He left his boat and walked through a hole in the rocks and into a beautiful, verdant land with plentiful food and happy people. When he eventually left to return home, the people told him not to tell anyone about their land. The fisherman eventually managed to find his way home, and did tell the people of his village about the beautiful land he had seen, but, try though they might, they never found the way back to the Peach Blossom Spring. On one side of this jar the fisherman is shown meeting one of the residents of Peach Blossom Spring.

On the other side of the jar is an inscription from a poem entitled Peach Blossoms at Qingquan Temple by the Song dynasty patriot and poet Xie Fangde (1226-1289), in which the poet compares his own life with that of the characters in Peach Blossom Spring. Xie Fangde served the Southern Song well, but failed to successfully defend Xinzhou against the Mongol armies. Afterwards he refused to serve the Mongols and in 1286 was sent north to Dadu (modern Beijing). He was imprisoned in a temple where he starved himself to death. This temple was originally built in AD 645, and when rebuilt in the 15th century was called Chongfusi (Temple of Exalted Happiness), but it has also been known as the Minzhongsi (Temple in Memory of the Loyal) and was renamed Fayuansi ( Temple of the Origin of the Dharma) in 1743. [This temple may also be the Qingquan Temple [Clear Spring Temple] named in the poem.] Xie Fangde’s story would have resonated with Ming loyalists as the dynasty fell to the Manchus in the year this jar was made.