Each small dish has a foliate rim and is delicately decorated with a different narrative scene from The Romance of the Western Chamber and other literary sources. The reverse of each is decorated with a continuous river landscape and is inscribed with an apocryphal Jiajing mark on the base. 3 ½ in. (8.9 cm.) diam.

Notes: This interesting group of dishes is decorated with a variety of scenes that most likely derive from popular novels, as well as one generic scene with a scholar and attendant, and one showing four immortals. Two scenes can be directly compared to woodblock illustrations from The Romance of the Western Chamber. The small dish with two ladies in a garden depicts the heroine Yinying offering incense in honor of her deceased uncle. (fig. 1) 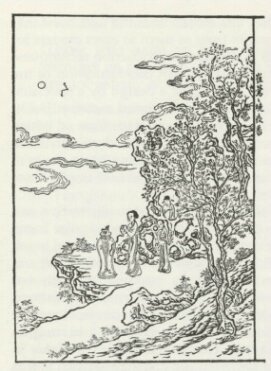 Fig. 1: Woodblock illustration to Xi Xiang Ji (Romance of the Western Chamber). From an edition published at Wuxing in the Tianqi period (1621-1627), from Craig Clunas, “The West Chamber: A Literary Theme in Chinese Porcelain Decoration,” Transactions of the Oriental Ceramic Society, London, 1981-82, p. 76, pl. 9.

Another direct comparison can be drawn between the small dish decorated with a lady seated on a garden rock beneath a tree and a woodblock illustration with the scene known as ‘Repudiation of the billet-doux’. (fig. 2)