Michele Marieschi (Venice 1710 - 1743), Venice, view of the Canareggio, looking towards the Grand Canal

Michele Marieschi (Venice 1710 - 1743), Venice, view of the Canareggio, looking towards the Grand Canal 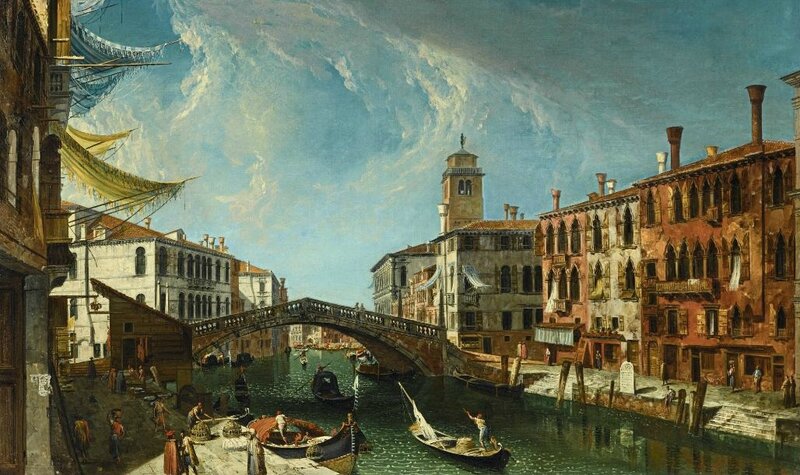 Provenance: In the possession of the family of the present owners since circa 1900.

Bibliography: To be included in the forthcoming monongroph on Michele Marieschi, by Dario Succi, where it will be listed as cat. no. 18.

Notes: This exceptionally executed and beautifully preserved canvas is a newly discovered picture by Michele Marieschi, one of the greatest Venetian vedutisti of the 18th century. That it has hung and remained in the same family collection for over 100 years has no doubt contributed to its wonderful condition, and indeed also explains the fact that it has remained unpublished. Long considered by the current owner’s family an anonymous Venetian work, it has only recently been rightly identified as an important addition to the mature oeuvre of Marieschi, and is without question among the most important rediscoveries by this artist to appear on the market in years.

The extraordinarily good condition of this painting allows us to admire the technique that distinguished Marieschi from other vedutisti: the wide-angled canal view enveloped in a swirl of dynamic pink and white clouds; the canal itself punctuated by gentle waves, the crests of which are painted with a swift touch of the brush; and the impasto on the façades of the buildings, with their varying hues of deep rusty red and ochre that successfully convey the effect of dappled sunlight on marble and stone. It is unclear what time of day it is, whether it is sunny or cloudy, but the figures on land and water go about their daily business with Marieschi carefully observing.

The design relates to two well-known versions of the composition. Both of these—one at Bowhill in the collection of the Duke of Buccleuch, the other at Schloss Charlottenburg, Berlin—have been dated by scholars to circa 1737-1739 (see F. Montecuccoli degli Erri and F. Pedrocco, Michele Marieschi, La vita, l’ambiente, l’opera. Milan 1999, pp. 94 and 98, cat. nos. 95 and 98, reproduced).  As with a number of Marieschi’s versions, the essential architectural elements running through the pictures are entirely consistent. Of notable difference, however, is the staffage and small gondole which calmly move through the paved streets and under the Ponte delle Guglie of the Cannareggio. Furthermore, Marieschi has here imbued the atmosphere surmounting the scene with a particularly dynamic and vigorously painted cloud formation. The swirling sky above stands in contrast to the seemingly more subdued and gentle counterparts in the Bowhill and Charlottenburg versions.

Marieschi approaches both sky and water in a stylistically similar example, also from circa 1737, depicting A Stonemason's Yard on the Grand Canal, Venice, which was sold with a pendant in New York at Christie’s, 15 April 2008, lot 54, for $3,401,000. This comparable work employs a similarly vigorous impasto application within the architecture, as well as more clearly delineated waves one more often finds with the mature work of Canaletto.

Little is known of Marieschi’s early training although it is probable that he began his artistic career as a stage designer. His first recorded work in Venice was a 1731 set design for the setting of Carnival Thursday in the Piazzetta, prepared for the impresario Francesco Tasso.  His early painted works took the form of capricci and vedute influenced by the work of fellow Venetians Luca Carlevarijs and Marco Ricci. Marieschi’s painting of vedute was further encouraged by the success Canaletto had with the genre. His paintings differ from those of his contemporaries, however, in his more theatrical compositions, exaggerated perspectives, atmospheric color and animated handling of figures. Marieschi’s first recorded vedute date from 1736 and were executed for Johann Matthias, Graf von der Schulenburg (1661-1747), around the same moment that this superlative painting was also created.