Fibula in the form of an eagle, Roman, 1st - 2nd Century AD

Fibula in the form of an eagle, Roman, 1st - 2nd Century AD 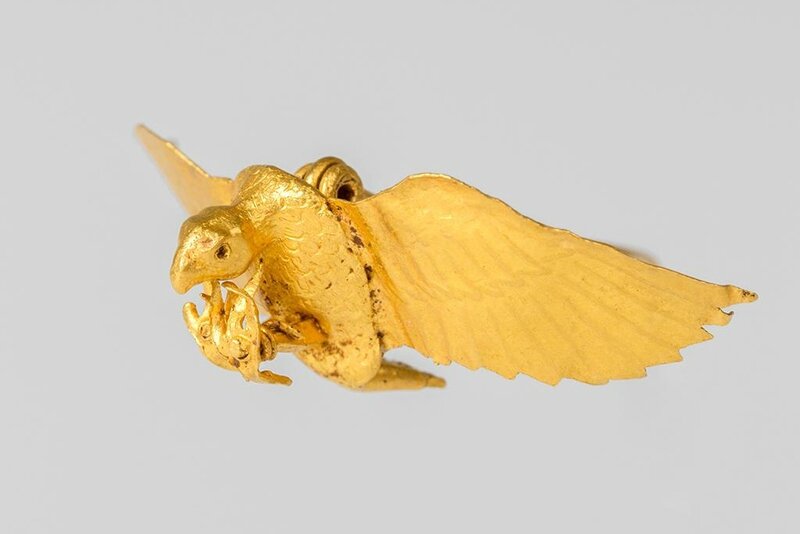 A beautiful gold fibula made up of the body of the brooch and decorated at the head with an eagle. The body is a simple horizontal pin. The piercing pin was on the underside of the curved end of the brooch, but this element is now missing. The union of the body with the head of the brooch is attached to a spring hinge on the back of the eagle, and this facilitates vertical movement.

The head is in reality a complete depiction of an eagle with outspread wings. It is a beautiful and faithful representation of this bird of prey, with considerable realism in the sense of movement it displays, and in the decoration of the body and the wings. These are made up of feathers of different sizes. The detailed work on the head and the talons displays the great quality of the workmanship.

In the Roman world the eagle was a prominent symbol of the Roman legions. The most important Roman military symbols were the signa militaria, the military ensigns or standards. Pliny the Elder said that it was Gaius Marius during the second consulship who established the eagle as the one and only emblem of the legions. Until that time this honour had been shared with the wolf, the boar, the horse and an ox with a man’s head. The reason for the choice of the eagle was because it resembled a legion in its qualities of force, intelligence, keenness and striking power.

The term fibula denotes all types of metallic clasps used in antiquity to fasten or hold together some of the articles that made up a person’s clothing. It was in fact the first form of articulate brooch.

Since antiquity the world of jewellery has had a close relationship to a determined status. Both men and women enjoyed being surrounded by luxury and enjoyed the use of precious stones and metals. However, while men introduced these into their life in general, for example, in the decoration of their houses, women were the only ones to wear adornments. The only exception in the case of men was that they did wear rings.

Roman jewellery reached heights of invention never seen before and never surpassed until the Renaissance. Imperial Rome was the world centre for jewellery and great quantities of precious stones and materials were imported for use in this field.

Initially the style of the pieces was typically Etruscan or Greek, but soon a style of its own developed in Rome. Pieces were ornate and sumptuous with mountings of precious stones, opus interrasile metalwork and mosaics of small stones set on gold and silver. Another specialty of Roman craftsmanship was the cutting of gems, the highly-esteemed engraving and sculpting, above all on cameos of agate and onyx, stones with diverse layers of colours that, once the working on the piece was finished, produced an effect of depth and polychromy. Mostly cameos were dedicated to portraiture.

Provenance: Private collection of A. Alonso, Salamanca. Formed between 1960 and 1980.