PARIS.- Christie’s France announces the sale of the collection Boni de Castellane & Anna Gould, la mémoire du Palais Rose on the 7 March 2017, continuing Christie’s long history of offering prestigious collections. Legendary figures of the late 19th and early 20th centuries, Boni de Castellane and his wife Anna Gould decorated their famous Palais Rose with the most exquisite works of art, including old master paintings and drawings, furniture, porcelain and jewelry. Collectors and connoisseurs will have the opportunity to enjoy the pre-sale exhibition for a week, from 28 February to 6 March 2017.

Lionel Gosset, Head of Collection sales, Christie’s France, comments: “We are honoured to be offering this important collection at auction, and have no doubt that collectors will recognise the rarity of the Palais Rose’s provenance and pay tribute to the incredible taste of those who have assembled and enriched it”.

M. Alexandre Pradère, expert, adds: “The contents of the home which will be offered at auction in March constitutes one of Paris’ best kept secrets. Diane de Castellane lived in this home surrounded by treasures, the majority of which she had inherited from her grandmother Anna Gould, and of which the impressive collection of Boulle furniture is the most significant of all. This auction stands as a testament to one of the most extraordinary palaces of the Belle Époque and a lasting memory of the Palais Rose”. Boniface de Castellane, known as ‘Boni’ was a key figure of the Belle Époque, a celebrated dandy of the Parisian scene, who was also involved in politics. He married Anna Gould in 1895, the daughter of an American millionaire who made his fortune in the railway industry. His success allowed Anna and her husband to benefit from a generous dowry when they married. On 20 April 1896 the cornerstone of what was to become one of the last great hôtel particulier of the 19th century was laid: the Palais Rose. It was built by Paul-Ernest Sanson and René Sergent, some of the last remaining architects influenced by neoclassicism. They openly sourced their inspiration from Versaille’s Grand Trianon, and recreated a perfect copy of the celebrated “Ambassador Staircase”, decorated by Charles Le Brun and demolished in 1752 under King Louis XV. The Palais Rose was completed in 1902 and from then hosted the most prestigious parties in Paris. Over seven years, this hôtel particulier frequently welcomed celebrities: Paris’ aristocracy, the Queen of Naples, Queen Isabel II of Spain, Kapurthala’s Maharadjah, and even the Kings of Spain and Portugal in 1905. However, this opulent lifestyle was not to last. On 20 January 1906, Anna Gould filed for divorce from Boni de Castellane, mainly due to the exorbitant expenses he had generated. A highlight of the sale is an Art Déco masterpiece and truly fascinating work of art. In 1926, Anna Gould commissioned Cartier to produce a nécessaire de bureau (estimate: €1,000,000-1,500,000, illustrated right) that compiled three functions: a penholder, an inkwell and a clock. It depicts a Japanese garden, or more specifically, represents the idea that Europeans had of the country, combining both Chinese and Japanese decorative elements. Coral, jade, rock crystal, pearls, lapis-lazuli, mother-of-pearl, lacquer, diamonds, enamel and aventurine, all of these precious and semi-precious materials were used to create this unique work of art. The auction will mark the first time the work has appeared on the market.

The 1920’s, and in particular Cartier’s first appearance at the 1925 International Exhibition of Modern Decorative and Industrial Arts in Paris, were a fantastic opportunity for the brand to promote resolutely modern pieces. Since the previous decade, fashion had evolved in a way that clients, including those of the Café Society, took interest in functional objects. Embracing this trend, new products appeared on the market. The objects were mainly aimed at male clientele, including office and smoking accessories. Cartier introduced the taste for Asian art by including traditional oriental features in modern creations such as the jade Buddhistic lions, which cover the inkwells, or the mythical creatures decorating the hands of the clock, forming a dragon when aligned.

From the Palais Rose are a beautiful pair of Sèvres ormolu-mounted “vases burettes”, dated 1787 and painted by Gilbert Drouet, (estimated €100,000-150,000, illustrated below right). The other pair of “ornaments” (estimated €80,000-120,000, illustrated below left) were probably created after the “côte de melon” model and features the same blue and gold fluted décor. This pair appears to be the only known model today. Out of approximately twenty known views by Francesco Guardi from a similar angle of The Piazza San Marco in Venice, this painting is undoubtedly one of the most important (estimate: €4,000,000-6,000,000). Rarely exhibited in public, it has remained in private hands since 1889. The large work is incredibly well executed, and is in remarkable condition, which allows the viewer to fully admire the vibrancy of the painting. The Basilica San Marco is depicted at the centre of the work, with the Clock Tower and the Procuratie Nuove to the left and the Campanile, the Doge’s Palace and the Procuratie Vecchie on the right. The delicately rendered shadows that lay on the foreground reveal the subtle atmosphere of the afternoon, either at the end of winter or early spring. Guardi’s skill in the manipulation of light and shade is illustrated by the pink-tinted clouds, the gentle breeze in the awnings of the stalls in front of the basilica and in the costumes of the figures, echoing the surrounding buildings. 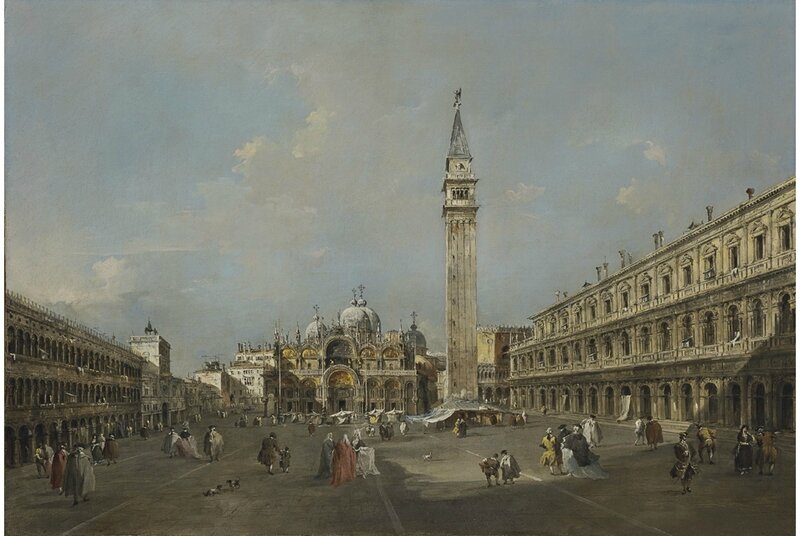 Among the collection is also the impressive ensemble of Boulle furniture. Since King Louis XIV’s reign, André-Charles Boulle’s furniture was popular with financers and aristocrats and his style continued to inspire a succession of both collectors and craftsmen over the centuries. At the end of the 19th century and beginning of the 20th century, Boni de Castellane was a key example of these aristocrats, furnishing the Palais Rose with some of the very best pieces. King Louis XIV’s reign is illustrated by a pair of coffers attributed to Boulle (estimate: €150,000-250,000). A pair of bas d’armoire from the reign of King Louis XV was directly inspired by Boulle’s models and stamped by Jean-Louis Faizelot-Delorme. Formerly in the important collection of financer Laurent Grimod de la Reynière, these bas d’armoire also furnished his hôtel on the Champs-Élysées (estimate: €600,000-1,000,000, illustrated left). A pair of Louis XVI meubles à hauteur d’appui illustrates the elegant taste of major cabinet makers Adam Weisweiler and Etienne Levasseur (estimate: €600,000-800,000). Another highlight of the sale is L’Heureux ménage (The Happy Household) by Jean Honoré Fragonard (estimate: €500,000-700,000, illustrated right). The work is a beautiful study for the final version, which achieved $1.2M (€1,060,095, illustrated left) at Christie’s New York in 2016. This lively study was given in 1825 by the famous printer Marc-Antoine Didot, to Sir Thomas Lawrence. It was then kept in several private collections before appearing at auction at the Palais Galliera in December 1960, where it was acquired by the current owner. Fragonard rearranged the composition in the final painting but both works illustrate a similar dynamism, created by the diagonal form of the figures. The tender and natural portrayal of the figures portray the painter’s own joyful family. Throughout the 1770s and 1780s, Fragonard produced numerous works depicting happy households, capturing intimate and affectionate scenes with remarkable skill, disregarding the rigid conventions of the period.

The sale will also present a selection of old master drawings including two important pastels by Jean Baptiste Perronneau (each portrait is estimated to realise €80,000-120,000, illustrated below). The portraits were acquired in 1936 by Count and Countess Georges de Castellane (1897-1944) to decorate the blue livingroom and the ground floor of the Hôtel de Castries. The drawings were published in the 2014 monograph Perronneau, written by Dominique D’Arnoult.