The Rosebery Tiara with matching bracelet and brooch. Accompanied by report no. 59425 dated 20 April 2011 from the SSEF Swiss Gemmological Institute, relating to the testing if a selection of pearls, stating that one bouton and seven drop shaped pearls were found to be natural, saltwater

This Victorian tiara was owned by Hannah Primrose, a socially and politically active heiress whose husband Archibald Philip would eventually become prime minister. She married Archibald in 1878, at which point she acquired the title Countess Rosebery. The tiara boasts 13 saltwater pearls - six button-shaped ones ringed with diamonds and seven pear-shaped pearls dangling from tear-drop diamond surmounts. There is a matching bracelet and brooch. The bracelet, designed as a series of eight graduated bouton-shaped natural pearls and old-cut diamond clusters to the fine-stone line intersections, mounted in silver and gold, circa 1878, 19.5cm long

The brooch, mounted with a large bouton-shaped natural pearl to the two row old-cut diamond surround with collet detail to the edge, mounted in silver and gold, with detachable brooch/pendant fittings, circa 1878, 4.3mm wide, bracelet and brooch in fitted case by R&S Garrard & Co., Haymarket, London

Accompanied by report no. 59424 dated 20 April 2011 from the SSEF Swiss Gemmological Institute stating that the nine bouton-shaped pearls were found to be natural, saltwater (2) 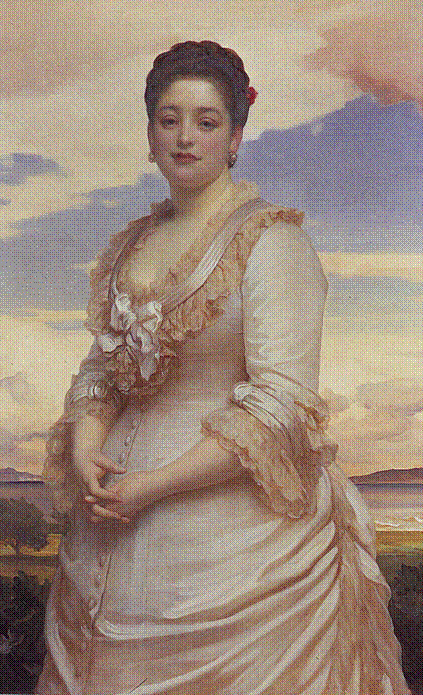 Hannah Primrose, Countess of Rosebery (27 July 1851 – 19 November 1890) was the daughter of Mayer de Rothschild and his wife Juliana, née Cohen. Upon the death of her father in 1874 she became the richest woman in Britain.

During the final quarter of the 19th century her husband, the 5th Earl of Rosebery, was one of the most celebrated figures in Britain, an influential millionaire and politician, whose charm, wit, charisma and public popularity gave him such standing that he "almost eclipsed royalty."[1] Yet his Jewish wife, during her lifetime regarded as dull, overweight and lacking in beauty, remains an enigmatic figure largely ignored by historians and often regarded as notable only for financing her husband's three ambitions: to marry an heiress, win the Epsom Derby, and become Prime Minister (the second and third of these possibly apocryphal ambitions were achieved after her death).[2] In truth, she was her husband's driving force and motivation.

Her marriage into the aristocracy, while controversial at the time, gave her the social cachet in an antisemitic society that her vast fortune could not.[3] She subsequently became a political hostess and philanthropist. Her charitable work was principally in the sphere of public health and causes associated with the welfare of working-class Jewish women living in the poorer districts of London.

Having firmly assisted and supported her husband on his path to political greatness, she suddenly died in 1890, aged 39, leaving him, distraught and bereft of her support, to achieve the political destiny which she had plotted. His premiership of the United Kingdom was shambolic, and lasted barely a year. For over thirty years following her death, he wandered in a political wilderness, directionless and exceedingly eccentric, until his own death in 1929. (Wikipedia)