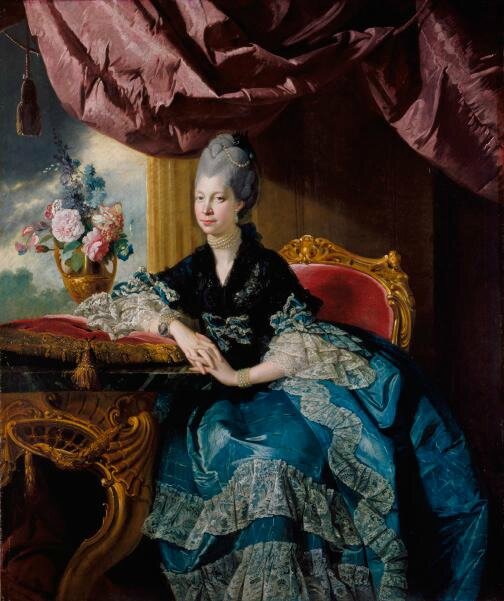 NEW HAVEN, CONN.- This February, the Yale Center for British Art premiered the first exhibition to explore the instrumental roles of the Hanoverian princesses Caroline of Ansbach (1683–1737), Augusta of Saxe-Gotha (1719–1772), and Charlotte of Mecklenburg-Strelitz (1744–1818)—all of whom married into the British royal family—and how they shaped the nation’s society and culture during a time of significant political and social transformation. Organized by the Center in partnership with the UK’s Historic Royal Palaces, Enlightened Princesses: Caroline, Augusta, Charlotte, and the Shaping of the Modern World brings together nearly three hundred objects from public and private collections across Britain, Europe, and the United States. The exhibition features works by the artists Hans Holbein the Younger (1497–1543), Mary Delany (1700–1788), Allan Ramsay (1713–1784), Joshua Reynolds (1723–1792), George Stubbs (1724–1806), and Thomas Gainsborough (1727–1788); craftsmen and designers Anna Maria Garthwaite (1690–1763), Matthew Boulton (1728–1809), and Josiah Wedgwood (1730–1795); and architects William Kent (1685–1748) and William Chambers (1723–1796), among many others. Elaborate court costumes and jewels, musical manuscripts, botanical and anatomical illustrations, architectural drawings and garden designs, royal children’s artwork, and the princesses’ own scientific instruments are being showcased. These important works serve to show how the princesses promoted the arts, sciences, trade, and industry, and underline their development of new models of philanthropy, especially to benefit the health of women and the welfare of children. These efforts spurred unprecedented intellectual exchange and social transformation which continues to have significance for us today. Enlightened Princesses debuted at the Center in New Haven from February 2 to April 30, 2017, and subsequently will travel to Kensington Palace in London, once home to Caroline and Charlotte, where it will be on view from June 22 to November 12, 2017. “Caroline, Augusta, and Charlotte had sweeping intellectual, social, cultural, and political interests, which helped to shape the courts in which they lived, and encouraged the era’s greatest philosophers, scientists, artists, and architects to develop important ideas that would guide ensuing generations,” said Amy Meyers, Director of the Yale Center for British Art and organizing curator at the Center. “The palaces and royal gardens they inhabited served as incubators for enlightened conversation and experimentation, and functioned as platforms to project the latest cultural developments to an international audience. Their innovative contributions across disciplines held great significance centuries ago and continue to inform our lives.”

The lives of Caroline, Augusta, and Charlotte straddled the eighteenth century. Caroline, the wife of the future George II, arrived in London in 1714 when the first Hanoverian king, George I, was crowned. She became queen consort after her husband succeeded his father in 1727. Augusta was married to Caroline’s eldest son, Frederick Prince of Wales, but never became queen as her husband died young. However, as mother of the next king, George III, Augusta became crucial to shaping his reign. In 1761, George III married Charlotte, who died in 1818, two years before her husband. “Until this point, the contributions of these three princesses have been little understood, and it is the aim of this exhibition to demonstrate how they influenced the interests of their era in the most vibrant of ways. In their engagement and support of many important projects and initiatives, they provided a blueprint for the royal women who followed them—right up to the present. For this, it is our intention to bring to the princesses the attention they deserve,” said Joanna Marschner, Senior Curator at Historic Royal Palaces and lead curator of the exhibition.

In addition to masterpieces from the Yale Center for British Art and Historic Royal Palaces, Enlightened Princesses presents works from the Royal Collection Trust, who have loaned over eighty objects for this exhibition. In total, nearly fifty esteemed collections are represented, including works from Royal Society; Royal Botanic Gardens, Kew, Richmond; British Museum; National Portrait Gallery, London; British Library; Victoria and Albert Museum; Science Museum, London; Winterthur Museum, Garden and Library; Hunterian Museum and Art Gallery, University of Glasgow; Metropolitan Museum of Art; Smithsonian Institution, Washington, DC; Beinecke Rare Book & Manuscript Library; and Yale University. The display also features a new work created by the artist Yinka Shonibare MBE (RA) (b. 1962) specifically for this exhibition, which has been inspired by a meeting, in 1753, between Princess Augusta and Mrs. Eliza Lucas Pinckney, the owner of a slave plantation in South Carolina, which was then a British colony. A letter written by Mrs. Pinckney to a friend, detailing the encounter, is included in the exhibition as a special loan from the collection of The National Society of The Colonial Dames of America in the State of South Carolina. The dress worn by Mrs. Pinckney on the occasion, made of silk produced on her plantation, is also on display, courtesy of the Smithsonian’s National Museum of American History. EXHIBITION THEMES
Enlightened Princesses is organized according to five themes and features a rich variety of objects that offer a glimpse into the princesses’ private lives, courts, and legacies. Oil portraits of Caroline (ca. 1735), by Joseph Highmore (1692–1780); Augusta (1769), by Allan Ramsay (1713–1784); and Charlotte (1771), by Johan Joseph Zoffany (1733–1810) will set the stage for the exhibition.

The Court as a Stage
For Caroline, Augusta, and Charlotte, the royal court operated as a stage, not only for the performance of music, dance, and theater but also as a political and cultural arena. In their furnishing of these spaces, the princesses constructed a visual statement of the authority of the Hanoverian dynasty, under which the patronage of music and the arts would flourish. At the same time, they had to navigate the inherently political nature of public and private life at court during a period that witnessed an information revolution, initiated by the mass circulation of newspapers, journals, and magazines replete with commentary, debate, and critique. This section includes Hans Holbein the Younger’s Lady Lister (ca. 1532–43), one of the artist’s many portrait drawings of courtiers at the Tudor court, which were particularly prized by Caroline and hung at Kensington Palace in celebration of the distinguished pedigree of the Royal House. These drawings were displayed alongside images of the present generation of the royal family. The painting “The Music Party”: Frederick, Prince of Wales with his Three Eldest Sisters (1733), by Philippe Mercier (1689–1760), is one such example. It depicts Caroline’s eldest son playing the cello. He is accompanied by his three sisters—Princess Anne (1709–1759) at the harpsichord; Princess Amelia (1711–1786) reading a volume of John Milton’s poems; and Princess Caroline (1713–1757) playing the mandora. Cultures of Learning: Powerful Conversations
At the heart of their social circles, Caroline, Augusta, and Charlotte built relationships with the leading cultural and intellectual figures of their age, including politicians, clergymen, philosophers, gardeners, architects, authors, playwrights, and composers. The princesses’ interests often overlapped or had a common focus, such as in science, medicine, philanthropy, and especially maternity, as well as the commercial interests of the state in Britain and abroad. Their pursuits in this area are represented by such objects as an oil portrait by John Vanderbank (1694–1739) of Sir Isaac Newton (1726); Thomas Gainsborough’s portrait of his friend, the musician Carl Friedrich Abel, later acquired by Queen Charlotte for whom he provided music (1777); and Allan Ramsey’s remarkably nuanced portrait of Charlotte’s medical adviser, Dr. William Hunter (1760). Royal Women: Education, Charity, and Health
Attitudes regarding royal child-rearing changed rapidly over the lifetimes of Caroline, Augusta, and Charlotte. There were shifts in methodology and focus in response to the evolving contemporary philosophies about childhood, sentimentality, and individual freedoms. The princesses were active contributors to the educational programs devised for their children, and sought to draw them into conversations beyond the palace walls. In their public roles as encouragers and protectors, the princesses were involved in ambitious and wide-reaching public philanthropic projects, organizations, and societies, especially those connected with health and social welfare. A precious silk satin baby robe (1762) belonging to George, Prince of Wales (later George IV), the eldest child of George III and Queen Charlotte, compares poignantly with tokens left by unmarried and impoverished mothers as they consigned their children to the Foundling Hospital. The hospital was a charity supported by all three of the princesses, which reflected their progressive interests, and it became an outlet to promote social change, through assistance it provided to disenfranchised and voiceless children in the greater society. Political Gardening
Caroline, Augusta, and Charlotte created and recast each other’s gardens, which were political and social spaces, as well as private retreats. They drew in the products of empire—plants and animals were collected from many continents, not only for their beauty and rarity but also their economic value. Similarly, collections of animals and birds brought back from the exploration of these “new” worlds were an important feature in the royal gardens. In the design of their gardens, the princesses explored contemporary garden philosophies and exercised their architectural ambitions. Many of their landscapes were made to be shared, not just with the community of gardeners, philosophers, and scientists the princesses drew into their circle but with a wider community, fostering an unprecedented relationship between monarchy and subject. Mark Catesby’s (1683–1749) dynamic watercolor The Painted Finch and the Loblolly Bay (ca. 1722–26) and an intricate cut-paper collage by Mary Delany, Cactus Grandiflorus, melon thistle (1778), serve as evidence of the princesses’ entanglement in Britain’s imperial ambition. To Promote and Protect: The Princesses and the Wider World
To promote the arts and sciences, Caroline, Augusta, and Charlotte supported and championed national products, and allowed their interest to be used by enterprising industrialists. The development of advanced industrial technologies—including cloth weaving, porcelain production, and metal casting—enabled unprecedented mass-produced consumer goods. This ensured, for the first time, that the image of the British monarchy was widely disseminated in a way recognized as a “brand” to domestic and international audiences. Additionally, Britain’s increased colonial expansion following the American War of Independence resulted in heightened interest in the fruits of empire, which the princesses celebrated by furnishing their homes and developing their gardens with imports from the Caribbean, India, Africa, China, and Australasia. Masterpieces that have been gathered to reflect the princesses’ engagement with the wider world include a painting by William Verelst (1704–1752), Audience Given by the Trustees of Georgia to a Delegation of Creek Indians (1734–35), as well as one of the Center’s treasured works, a painting by George Stubbs of a zebra belonging to Queen Charlotte (1763). 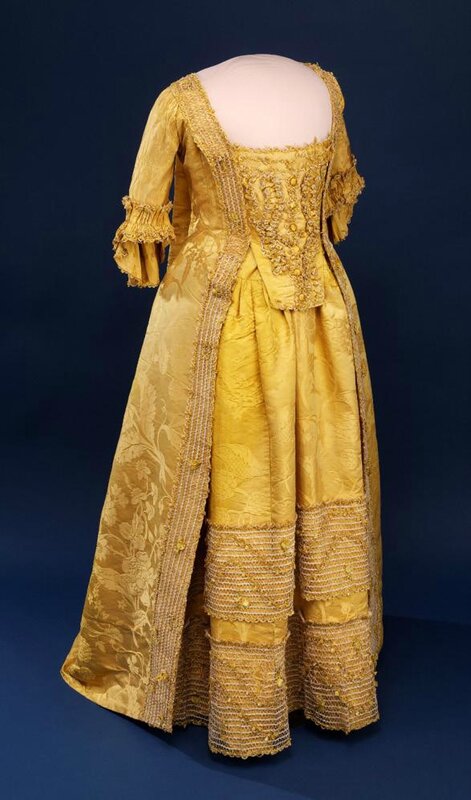 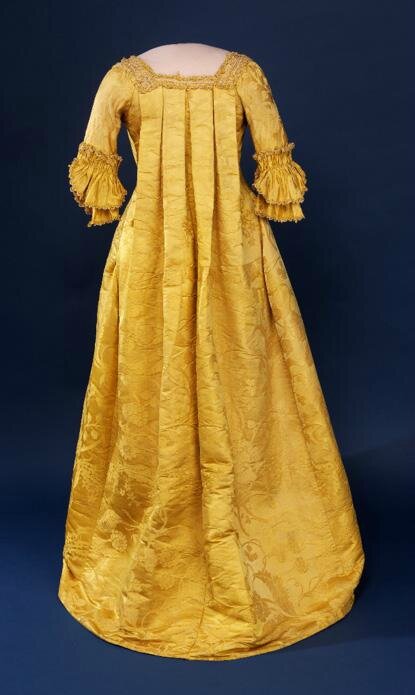 William Verelst, Audience Given by the Trustees of Georgia to a Delegation of Creek Indians, 1734–35, oil on canvas, Winterthur Museum, Wilmington, Delaware, Art Gallery and Garden, Gift of Henry Francis du Pont