Ancient Tomb of Chinese General and Princess Filled with Figurines

Ancient Tomb of Chinese General and Princess Filled with Figurines An inscription found in the tomb says that Zhao Xin and his wife Princess Née Liu were buried together in the tomb on Mar. 18, 564 A.D. The couple are seen here, still together after 1,500 years. Credit: Photo courtesy Chinese Cultural Relics

The tomb of a general and his princess wife buried on March 18, in the year 564, has been discovered in China.

The ancient tomb, which contained the couple's skeletons, was also filled with figurines, said the archaeologists who described the findings recently in the journal Chinese Cultural Relics.

"The grave goods in this tomb are comprised of a total of 105 items, mostly pottery figurines," the archaeologists wrote. The figurines, whose colors are preserved, include representations of warriors, camels, oxcarts and drummers, with the tallest standing at about 22 inches (56 centimeters).

A sandstone inscription found in the tomb describes the life of the couple Zhao Xin and his wife, Princess Neé Liu. The inscription says (in translation), "On the 20th day of the second moon of the third year of the Heqing period [a date researchers said corresponds to March 18, 564], they were buried together."

Zhao Xin served the rulers of the Northern Qi dynasty, which controlled part of northern China from 550 to 577. He held posts as a general and at times a governor in different areas of China, the inscription said.

At his final post, Zhao Xin served as the general of a garrison of soldiers at a place called Huangniu Town and led the garrison to victory in battle. "A thousand men lost their souls; he disposed of the Yi barbarians and exterminated the enemy, and the public flocked to him," the translated inscription says.

Of Princess Née Liu, the inscription says that "by nature, she was modest and humble, and sincerity and filial piety were her roots. Her accommodating nature was clear, her behavior respectful and chaste."

Zhao Xin died at the age of 67 while still general of the garrison, according to the inscription, which does not indicate why he and his wife were buried at the same time. A detailed analysis of the bones hasn't been published yet.

Archaeologists say that 105 items were discovered in the tomb and that most of them were figurines. Credit: Photo courtesy Chinese Cultural Relics

Archaeologists said in the journal article that the tomb is located near modern-day Taiyuan city on the "eastern foothills of the Xishan Mountains, on the west bank of the Fenhe River."

The mountain location could have had some symbolic value, because the inscription also says, "If the mountain peak's roots are firm, it can contend in height with Heaven and Earth; deep and brilliant, solid and bright, it speeds far away along with the Sun and Moon; civil and martial seek each other, and so men are naturally there…"

The cemetery was excavated by archaeologists between August 2012 and June 2013. The archaeologists are from the Shanxi Provincial Institute of Archaeology, Shanxi University's School of History and Culture, Taiyuan Municipal Institute of Cultural Relics and Archaeology, and the Agency of Cultural Relics and Tourism of Jinyuan District, Taiyuan city.

An article describing the discovery was published, in Chinese, in the journal Wenwu, in 2015. The article was recently translated into English and published in the journal Chinese Cultural Relics. In the journal article, the archaeologists also discussed the other tombs they found in the cemetery, noting that they excavated 69 tombs in total. A figurine of an ox, Northern Qi dynasty (550–577). Archaeologists noted that they also found figurines of carts and this ox may have been meant to pull a cart. Credit: Photo courtesy Chinese Cultural Relics 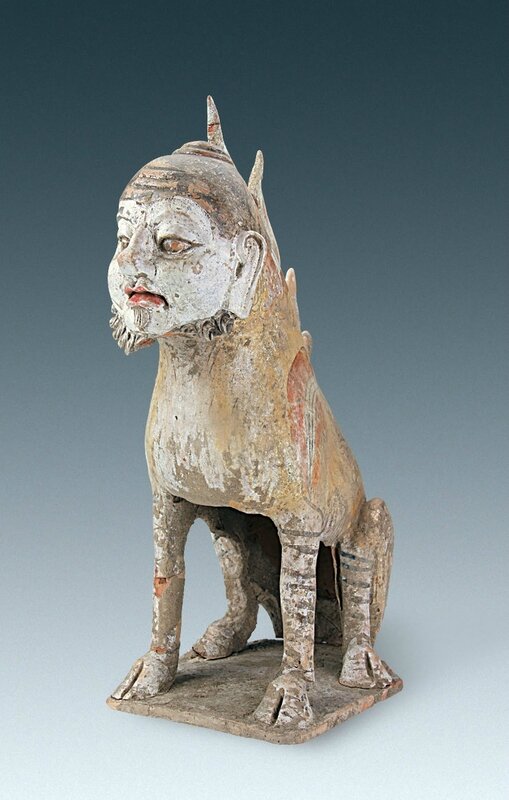 The figurine of a warrior, Northern Qi dynasty (550–577), its colors well preserved despite the passage of almost 1,500 years of time. Credit: Photo courtesy Chinese Cultural Relics

A drummer, Northern Qi dynasty (550–577), still ready to beat out a song despite the passage of over a millennia of time. Credit: Photo courtesy Chinese Cultural Relics