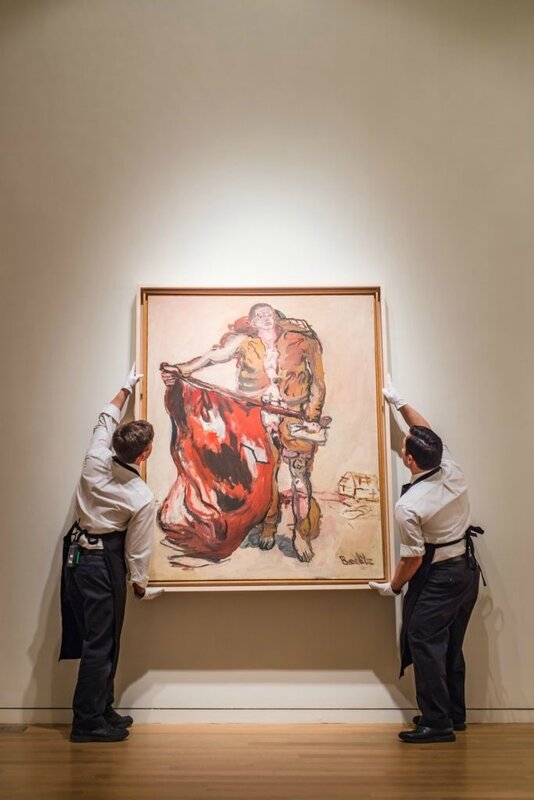 LONDON.- A rare masterpiece by the German painter Georg Baselitz (estimated £6.5m-8.5m) is set to break the record for the artist at auction when offered at Sotheby’s Contemporary Art Evening Auction in London on 8 March 2017. Mit Roter Fahne (With Red Flag), 1965, from the artist’s ground-breaking ‘Heroes’ series, is a painting that cemented the artist’s reputation as one of the most provocative and compelling voices of the post-war era.

Alex Branczik, Sotheby’s Head of Contemporary Art, Europe said “Seismic moments of social and political change in history have always created seismic changes in art, something we undoubtedly see in post-war Germany. Many of these artists tackled challenging; some might say profound, subject matter, while at the same time creating new visual languages which redefined European art history.”

The Growth of German Contemporary
The market for German contemporary art has gone from strength to strength in recent years, led by the £30.4m ($46.3m) achieved for Gerhard Richter’s Abstraktes Bild at Sotheby’s London in 2015, a record for any living European artist. Richter is just one from a wave of German post-war masters defining today’s contemporary art market.

• Over the last 5 years there has been a 31% increase in the number of bidders on German Contemporary Art at Sotheby’s auctions worldwide.

• In Sotheby’s flagship Evening London contemporary sales in 2016, around 20% of the works offered were by German artists.

Born in 1938 and aged seven at the end of the Second World War, Georg Baselitz once poignantly described the past that he inherited by saying, “I was born into a destroyed order”. Considered one of the most important painters of his time, the artist has assiduously challenged the realities of history and art history in order to deliver a searing analysis of human existence in the era following the Second World War. Just as Berlin and the Wall became concrete metaphors for the global stand-off of the Cold War, so Baselitz’s Hero paintings today stand as icons of a history that informs our existence in the Twenty-First Century.

The tremendous import of Mit Roter Fahne is attested to by its storied exhibition history, having been displayed in countless retrospectives of the artist’s work across the globe, including the landmark retrospective at the Royal Academy of Arts in London in 2007, curated by Norman Rosenthal. The painting is expected to surpass the current auction record for the artist (£4.69 million / $7.45 million) in Sotheby’s March sale. Executed on a monumental scale, Anselm Kiefer’s Athanor is a provocative exploration into Germany’s past, and the vicissitudes of history and memory. On 27 February 1933 the Reichtsag, home to the German parliament, burned down. The event is now seen as pivotal in the establishment of Nazi dictatorship in Germany, with Hitler manipulating the incident to expel the Communist party from parliament and imprison its leaders. In Athanor the building appears shell-like, as if we are witnessing the last burning embers of the fire. This pioneering work must be seen as one of the artist’s most important and ambitious paintings. Gerhard Richter’s Eisberg is the ultimate example of the artist’s rejuvenation of the landscape painting genre. No other subject has fascinated the artist so extensively nor occupied him over such a long period, yet the total number of the landscape paintings that Richter has made is relatively low, making them rare in his oeuvre. A masterclass in technique, composition and subject matter, Eisberg is the largest of only three paintings Richter made on the subject, based on photographs taken during a journey through the icy straits of Greenland in 1972. At the time, the artist’s marriage to Ema was in crisis; his Eisberg series are widely considered to be a metaphor for the artist's state of mind. The National Gallery, Prague, has requested that this work be included in the artist’s first retrospective in the Czech Republic, due to open in April 2017. Executed in 2005, Freischwimmer 119, belongs to Wolfgang Tillmans’ highly coveted eponymous series, whose title refers to German levels of swimming proficiency, and embodies the artist’s most conceptually complex and visually enigmatic contribution to contemporary art. Created in the darkroom without the use of a camera, these works echo the avant-garde photographic experiments of Man Ray and György Kepes. However unlike these early iterations of the photographic medium, the exact process behind Tillman’s Freischwimmer works is shrouded in mystery. In 2000, Tillmans was the first photographer and non-British artist to win the Turner Prize and his multifaceted practice will be celebrated with a seminal exhibition at Tate Modern, London from February to June 2017. Die Mutter von Joseph Beuys is one of two monumental paintings depicting the artist’s likeness in the guise of Joseph Beuys’ mother. The portrait is based upon a photograph of the Joseph Beuys - the legendary conceptual artist - as a child walking with his mother. In the source image the face of Beuys’ mother is obscured, hidden underneath a rain-hat in a grainy photograph. By presenting his own distinctive image in place of Beuys’ mother, Kippenberger satirizes and undermines the revered legacy of the godfather of German conceptualism, placing himself at the heart of art historical debate. Hailed by Sigmar Polke as “one of his most important paintings”, Die Schmiede presents an extraordinary multi-layered painting; with its fusion of abstraction and figuration, and appropriation of Pop imagery, it strikingly combines several elements that were of particular importance to the artist’s output during the 1970s. Born in 1941, Polke came of age in an environment rife with political conflict and division in the critical decades following the Second World War. In 1963, when he was just twenty-two years old, Polke and his contemporaries Gerhard Richter, Manfred Kuttner and Konrad Lueg, staged a direct response to the climate of their upbringing by initiating the radical stylistic notion of Kapitalischer Realismus (‘Capitalist Realism’); a pithy riposte to the state-sponsored ‘Socialist Realism’ of the German Democratic Republic as well as the aesthetics of consumer culture that dominated Western Europe.