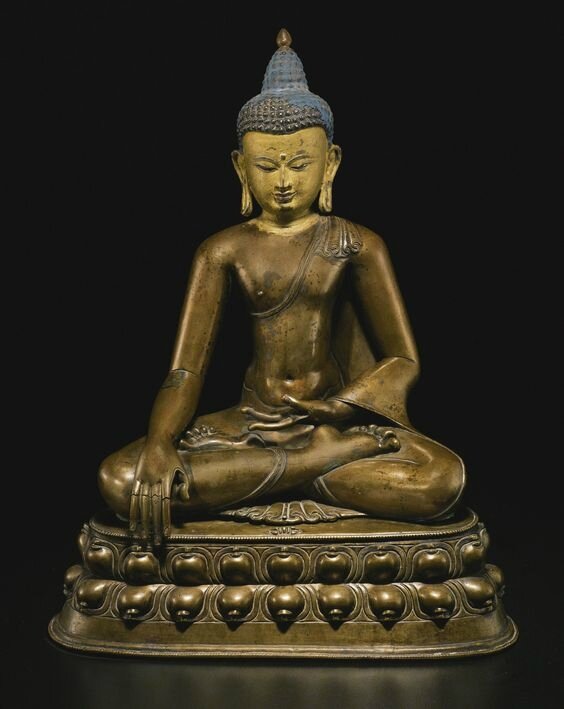 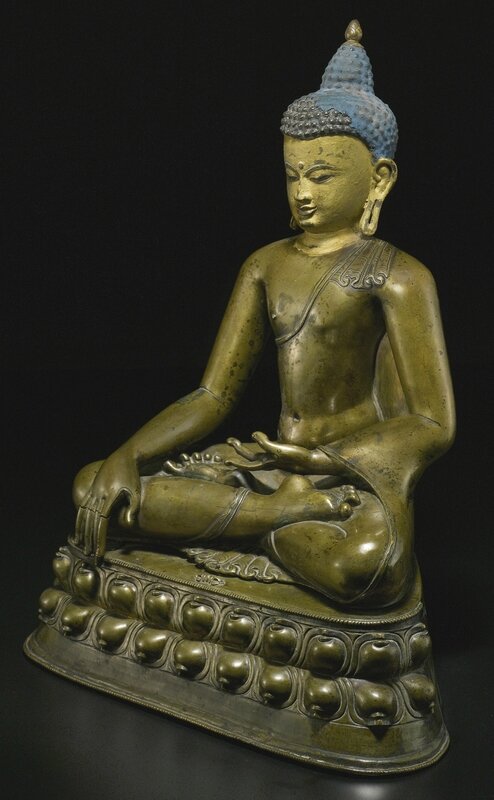 The figure is not gilded, in common with the majority of metal sculpture from eastern India and in contrast to the popular gilt copper medium of metal sculpture from Nepal. The sculpture is inlaid with copper and silver, as is a significant proportion of medieval eastern Indian metalwork: the downcast eyes are inlaid with silver, which is visible through the polychromy, and the lips and fingernails are elegantly inlaid with copper. Consecration marks in the form of incised seed syllables om, ah and hum are positioned at upper chakra points on the figure verso representing the purification of body, speech and mind.

The sculpture is likely to have been made in central Tibet during the thirteenth century when the eastern Indian traditions were gradually assimilating into this uniquely Tibetan sculptural style. Compare the face, hairline, shape of head and ushnisha, the hands and feet and the diaphanous robe of the Tibetan eleventh or twelfth century Buddha from the collection of Jack and Muriel Zimmerman, see Marylin M. Rhie, Robert A. F. Thurman, The Sacred Art of Tibet, London, 1991, p. 74, cat. no. 2. Compare also the group of twelfth or thirteenth century bronze Tathagatas at Nyethang, see U. von Schroeder, Buddhist Sculptures in Tibet, Hong Kong, 2001, pp. 1162-3, pls 308A-E.

This iconographic form of Shakyamuni Buddha, in which the historical Buddha is presented in the earth-touching gesture (bhumisparsha mudra), recalls an episode from his spiritual biography in which he triumphs over Mara (maravijaya) just prior to his enlightenment.

Having vowed to remain in meditation until he penetrated the mysteries of existence, Shakyamuni was visited by Mara, a demon associated with the veils and distractions of mundane existence. The Buddha remained unmoved by the diversions with which Mara sought to deflect him from his goal. According to some traditional accounts, Mara’s final assault consisted of an attempt to undermine Shakyamuni's sense of worthiness by questioning his entitlement to seek the lofty goal of spiritual enlightenment and the consequent freedom from rebirth.

Aided by spirits who reminded him of the countless compassionate efforts he had made on behalf of sentient beings throughout his numerous animal and human incarnations, Shakyamuni recognised that it was his destiny to be poised on the threshold of enlightenment. In response to Mara’s query Shakyamuni moved his right hand from the meditation position in his lap and touched the ground, stating, ‘the earth is my witness’. This act of unwavering resolve caused Mara and his army of demons and temptresses to disperse, leaving Shakyamuni to experience his great enlightenment. The thunderbolt sceptre (vajra) that appears on the lotus throne before the figure refers to the adamantine site (vajrasana) at Bodh Gaya, which is said to have been empowered to expedite his enlightenment.

Sotheby's. Indian, Himalayan & Southeast Asian Works of Art Including Property from The Cleveland Museum of Art, New York, 15 Mar 2017, 10:00 AM