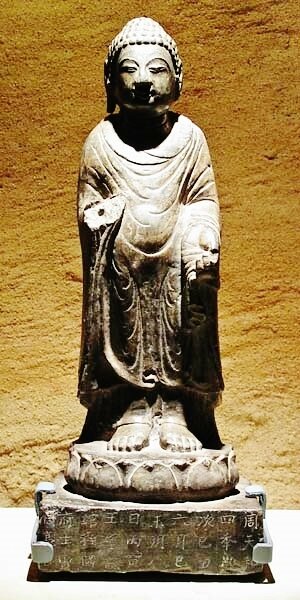 Although both of these statues were created during the Northern Zhou dynasty, they are markedly different in their overall appearance, carving, physiognomy, robes, and hair. The figure on the first wears a monk's robe, while the figure on the second wears Chinese court costume and a different hair treatment (the Buddha's hair is canonically shown with individual small curls, as on the figure at first).

Northern China was a crossroads at this time, and different artistic traditions are evidently at work in these two statues, which were found in adjoining counties. The bodhisattva on the first, shares his hairstyle with the Northern Zhou Buddha from Wanrong County (above); his face, however, seems Mongolian with its prominent epicanthic folds, bow-curved eyebrows, and a protruding button-chin.

The Buddha on the right, on the other hand, has many stylistic affinities to the Northern Zhou Buddha from Jishan County (previous above). Shakyamuni Buddha is seated on a lotus throne below a mandorla with flying apsarasas. He is flanked on either side by three pairs of standing figures: disciples Ananda and Kasyapa, a pair of bodhisattvas, and another pair of attendants. Two smaller disciples kneel on lotus flowers below the Buddha's throne, facing a lotus-bud jewel (the cintamani, symbolizing the dharma) that is elevated by a telamon. The overall symmetry of the piece is broken only by the Buddha's different mudras (abhaya with his right hand, varada with his left) and by the dissimilar poses of two lions at the base of the composition. The far ends of the base are occupied by two standing bodhisattvas, whose heads are now missing. This statue was collected from Foguang Temple on Mt. Wutai. Painted outlines are seen on its mandorla and the front surface of its base. The cheerful-looking figure is seated on a lotus throne, his hands in abhaya and varada mudra. His head is centered on a lotus mandorla, which in this case probably symbolizes the Buddha's enlightenment. The statue was originally painted and gilded. 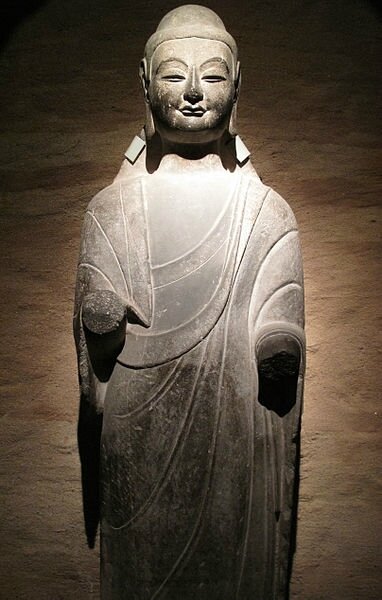 The imposing countenance of this Buddha, with its mysteriously narrowed eyes, provides another example of the wide stylistic variation of these Northern Qi-dated statues (see above). The treatment of the hair is like several, but not all, of the previous examples. The Buddha's face projects an air of serene inwardness; the figure's closed eyes, with their exaggerated upper lids, give the impression that he is looking within himself, in deep meditation. This statue of Shakyamuni's youngest disciple was collected from Foguang Temple on Mt. Wu Tai, the same location as the Northern Qi bodhisattva seen above. Ananda is traditionally honored as the disciple who compiled the sutras, in which task he was aided by his flawless memory. His pose, as seen here, is usually interpreted as listening to the Buddha's discourse or mentally rehearsing what he has heard. As the Disciple of Wisdom, he is often paired in sculptural groups with Manjusri (the Bodhisattva of Wisdom). Similarly, on Buddha's other side, (Maha)Kasyapa, the Disciple of Action, is often paired with Samantabhadra, the Bodhisattva of Action.

The statue is made of white marble. A thin layer of paint, with darker horizontal bands, is visible on the outer robe. The Buddha of the Western Paradise is surrounded by a halo upon which seven other buddhas are seated on lotus flowers. These probably represent seven "historical Buddhas" who are associated with Amitabha as the Buddhas of ages past. This representation of the Buddha seems exceptionally lifelike, when compared to the stylized features of most other statues of him; it could almost be modeled on an actual person. The fleshiness of this face, with its soft chin almost disappearing into the plump jowls and neck, is quite striking. Our final example from the Tang dynasty is Shakyamuni sitting in bhumisparsha (hand "touching the earth") in front of a carved and painted double mandorla. The serene face is almost mask-like, with narrow curved eye-slits and exaggerated creases at the corners of the lip. The figure's hair is arranged in a series of wave-like folds. The bodhisattva is probably Avalokiteshvara, who is shown as the protector of numerous small figures who are engaged in various activities (banqueting, right; menaced by dangerous animals, left; adoring the bodhisattva, bottom). The slab is carved in relief, with an undecorated background. Everything about this Arhat proclaims his fierce determination to protect the dharma. His furrowed brow, narrowed gaze, downturned lips, his left fist crossing his abdomen, his right hand firmly planted upon his knee, and his "Western" (spread-seated) posture all display his unmovable resolve and devotion to this duty. The slender Bodhisattva of Compassion, by now obviously female, holds a water jar in her right hand. She is crowned by an image of Amitabha Buddha, her spiritual "father." The iconography of this devotional image of the savior goddess is one of her most popular representations. The slender bodhisattva is made of painted wood. There is a seated Buddha in the figure's crown, that would normally be sufficient to identify this statue as Avalokiteshvara. However, the the Buddha is making an esoteric mudra, and hence can't be identified for certain as Amitabha, so this bodhisattva can't be identified for certain as Avalokiteshvara.