Despite the dynamic, lively touch of the artist’s brush, Gerrit Dou’s Old Man Praying is a painting of calm, spiritual reverence. Seen from a slightly elevated viewpoint and against an undefined backdrop, the elderly bearded figure kneels in prayer while gazing fervently toward an unseen object of devotion. This undated painting relates closely to four works depicting an aged hermit that Dou executed between 1665 and 1670. 1 In each of these other works, however, Dou included a context for the hermit’s spiritual reverence, whether a crucifix or some other symbolic attribute related to the Christian faith. 2 For example, in Hermit Praying, 1670, in the Minneapolis Institute of Arts  (fig 1), Dou placed the hermit in a carefully articulated environment that includes a dead tree trunk and an architectural ruin. 3 With a rosary in hand, the hermit gazes toward the Bible on his lap. Other objects that symbolically evoke Christian spirituality and transience—crucifix, skull, extinguished candle, and hourglass—rest on a nearby table. 4  This imagery is also depicted in Dou’s The Hermit (1670) in the National Gallery of Art in Washington, D.C.  (fig 2). One can only speculate as to why, in the Leiden Collection painting, Dou chose to focus exclusively on the hermit’s prayerful gesture and not include the types of Christian attributes he included in the other paintings of hermits. One explanation may be that Dou painted this work for a Protestant patron who wanted an image of personal piety and commitment to faith expressed through prayer. 5 Whatever the motivation for this focused approach to the subject, it seems probable that Dou painted this tronie in his studio after a live model, one whom he depicted a number of times in the 1660s and 1670s, including in the Minneapolis painting. The figure’s wide-set eyes, nose, and wrinkles above his brow are distinctive features that Dou must have found compelling for his representations of a spiritual individual.

The infrared photograph of an Old Man Praying reveals a vigorous and spontaneous undermodeling that suggests Dou painted this figure quickly from life. (fig 3) It shows clearly that Dou modified the man’s position during the painting process by adjusting the angle of his shoulders to a three-quarter view. 6 The lively brushstrokes that Dou used to model the figure’s face are reminders of the artist’s unique ability to render forms meticulously while maintaining a loose and free handling of the brush. 7 Dou’s idiosyncratic, “hatching” style of brushwork is clearly visible along the hermit’s temple and nose and on the back of his hands. The energetically and quickly executed background, where the master applied his translucent paint with a relatively wide brush, is visible in infrared as well as with the naked eye. 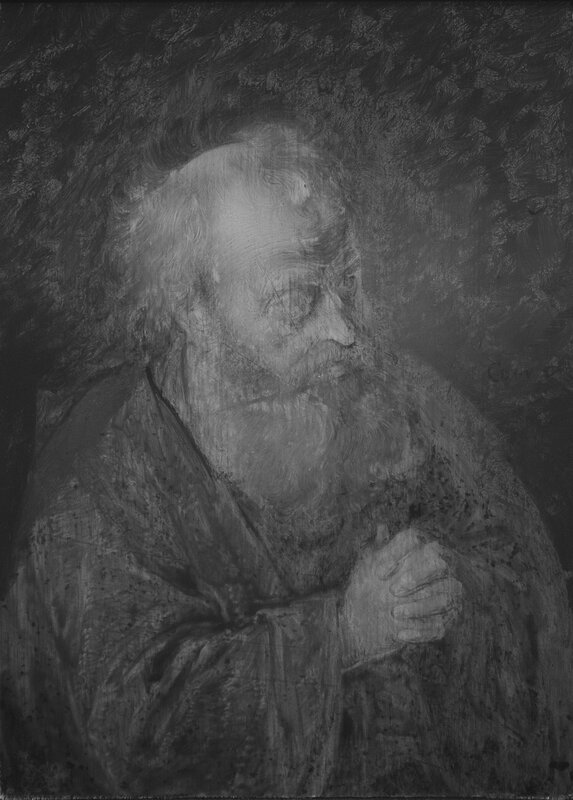 Old Man Praying once formed part of the distinguished collection of Lothar Franz von Schönborn (1655–1729), Elector of Mainz and Archbishop of Bamberg at Pommersfelden, one of the most important collections of paintings in eighteenth-century Germany. By the time Schönborn acquired this painting in 1719, he had amassed a collection of almost one thousand works of art, eventually owning nine paintings by Dou. 8 In 2006 the present owner acquired this small masterpiece along with another soulful image of an elderly person, Rembrandt’s Study of a Woman in a White Cap (RR-101), at the same Sotheby’s sale in New York. 9