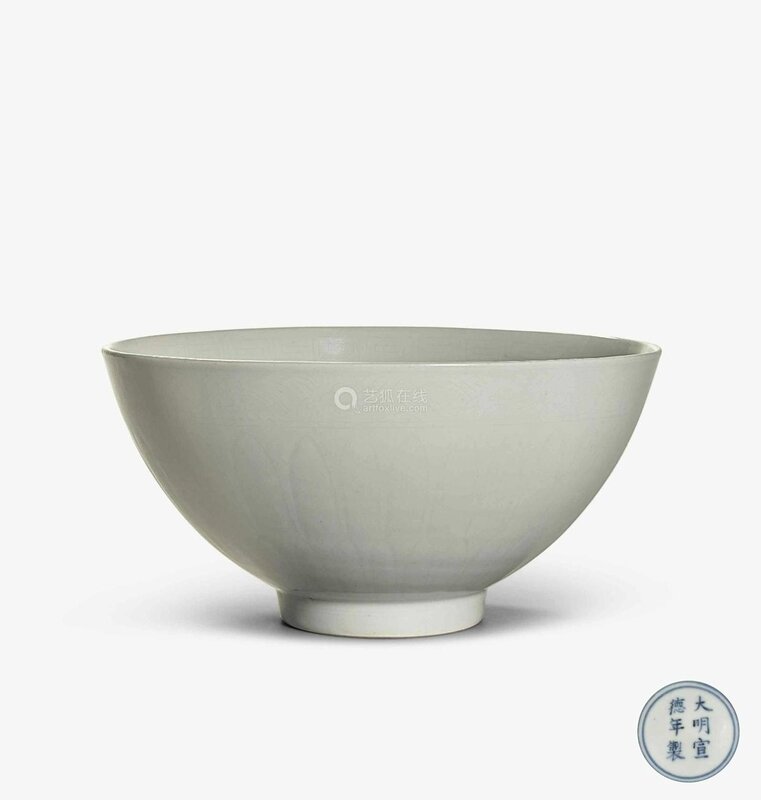 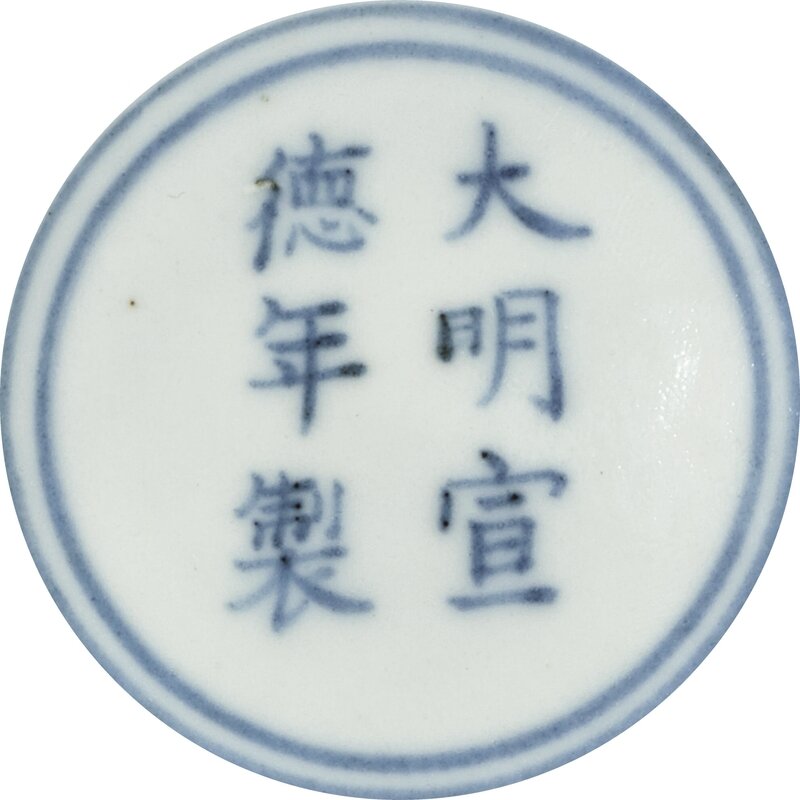 well potted, with deep rounded sides rising from a short slightly tapered foot, the exterior faintly incised with two rows of elongated lotus petals below a frieze of crested waves, the interior incised with a central medallion of two leafy pomegranates within double-circles under a register of keyfret at the rim, applied overall with an even white glaze tinged to a subtle light blue tone, the base with the six-character mark within double-circles in underglaze blue. Diameter 8 1/8  in., 20.5 cm

Note: Popular for the elegant small foot and deep form resembling the shape of a lotus bud (lianzi), bowls of this type were made at the imperial kilns in Jingdezhen from the reign of the Yongle Emperor and acquired popularity not only at the Ming court, but also in the Near East. In both its form and decoration this bowl closely follows its Yongle period prototypes, which are known with a variety of both incised and anhua (‘hidden’) designs. See for example a bowl attributed to the Yongle reign, decorated with petals on the exterior and a decorative band on the rim, in the British Museum, London, illustrated in Oriental Ceramics. The World’s Great Collections, vol. 5, Tokyo, 1981, pl. 150.

A Xuande mark and period bowl of this type, from the Carl Kempe collection, illustrated in Bo Gyllensvärd, Chinese Ceramics in the Carl Kempe Collection, Stockholm, 1964, pl. 676, was sold in our Paris rooms, 12th June 2008, lot 44; one from the Eumorfopoulos collection, included in the Min Chiu Society exhibition Anthology of Chinese Ceramics, Hong Kong, 1985, cat. 59, was sold in our Hong Kong rooms, 21st May 1979, lot 21; and a third from the R.F.A. Riesco collection was sold in our London rooms, 7th June 1988, lot 256. Compare also a Xuande mark and period lianzi bowl incised with two tiers of petals but lacking the band around the rim, in the Hong Kong Museum of Art, Hong Kong, sold in our Hong Kong rooms, 12th May 1976, lot 76.

Bowls of this type from both the Yongle and Xuande reigns are also known painted in underglaze blue; see a bowl attributed to the Yongle reign in the Indianapolis Museum of Art, included in the exhibition Ming Porcelains, China Institute in America, New York, 1970, cat. no. 5; and a Xuande mark and period example in the Shanghai Museum, Shanghai, illustrated in Qinghua youlihong [Underglaze blue and red], Hong Kong, 1987, col. pl. 44.