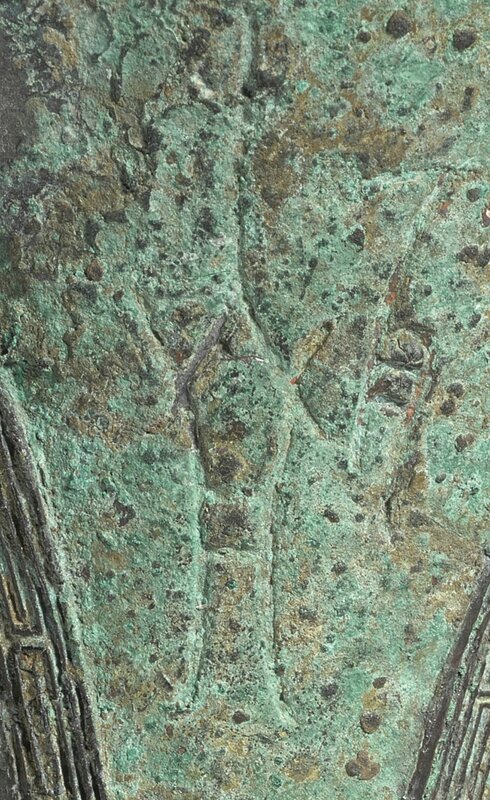 of slender waisted form, finely cast around the mid-section with pairs of taotie masks with raised eyes divided by notched flanges, above a pair of bowstrings interrupted by two apertures, the splayed foot similarly decorated in an openwork design, the tall flared neck encircled by four upright triangular blades rising from a band of spirals, the surface with areas of malachite encrustation, the exterior with a pictogram below the rim, possibly reading que, Japanese wood box (2). Height 10 3/8  in., 26.4 cm

Note: This vessel belongs to a distinct and rare group of archaic bronze ritual vessels that feature striking intaglio and openwork decoration. Several gu of this type were excavated at the tomb of Fu Hao in Anyang, Henan province, illustrated in Yinxu Fu Hao mu, Beijing, 1980, pls 74 and 75; and another was excavated at Xiaotun, a small village near Anyang, published in 5000 Ans d’Art Chinois. Les Bronzes, Brussels, 1989, vol. I, pl. 41. These excavated examples confirm the dating of this piece to the first century of the Anyang period, and their importance in the context of burial ceremonies.

See a closely related gu of this type, bearing the same inscription, from the Carl Kempe Collection, illustrated in Wu Zhenfeng, ed., Shangzhou qingtongqi mingwen ji tuxiang jicheng [Compendium of Inscriptions and Images of Bronzes from the Shang and Zhou Dynasties], Shanghai, 2012, vol. 17, no. 9116; and two others, with the same inscription, from the collection of V.W. Shiro, sold in our London rooms, 13th-14th November 1972, lots 234 and 235; the first, which was previously sold in the same rooms, 28th May 1963, lot 139, is now in the Idemitsu Museum, Tokyo and published in Ancient Chinese Arts in the Idemitsu Collection, Tokyo, 1989, pl. 50, as well as in Wang Tao and Liu Yu, A Selection of Early Chinese Bronzes with Inscriptions from Sotheby’s and Christie’s Sales, Shanghai, 2007, no. 200.

Several other gu of this type are held in important collections around the world, for example one in the Shanghai Museum, Shanghai, is illustrated in Ma Chengyuan, Ancient Chinese Bronzes, Oxford, 1986, pl. 28; another is published in Robert W. Bagley, Shang Ritual Bronzes in the Arthur M. Sackler Collections, Cambridge, 1987, pl. 30; one from the Royal Ontario Museum, Toronto, is illustrated in Christian Deydier, Les Bronzes Archaïques Chinois, Paris, 1995, vol. I, p. 227, pl. 1; a fourth in the British Museum, London, is illustrated in William Watson, Ancient Chinese Bronzes, London, 1962, pl. 22b; and a further example was sold in our London rooms, 8th July 1975, lot 8.

Vessels cast in openwork are known from as early as the Erligang period, with a number of gu and zun excavated at Panlongcheng, Hubei province, such as one published in Zhongguo meishu fenlei quanji. Zhongguo qingtongqi quanji, Beijing, 1996, vol. 1, pl. 155.