NEW YORK, NY.- Henry Howard-Sneyd, Chairman of Asian Art, Europe & the Americas, noted: “In a thriving market for Asian Art in New York, we saw a strong series of auctions across all categories comfortably exceed pre-sale expectations. Our offerings this week were particularly diverse, with great prices for works from an early 3rd century Gandharan Grey Schist Figure of a Seated Buddha from the Cleveland Museum of Art to a Ming Dynasty Anhua-Decorated Tianbai-Glazed Meiping, Bada Shanren’s album of classical Chinese paintings to Maqbool Fida Husain’s modern untitled painting of four women. The stage is truly set for our Hong Kong sales at the beginning of April.”

MING: THE INTERVENTION OF IMPERIAL TASTE
Total $11.3 Million
Estimate $9.7/13.7 Million
Angela McAteer, Head of Chinese Works of Art in New York, commented: "This was a great way to start our Asian Art sales in New York. This auction of treasures from the Ming Dynasty is an indicator of the tremendous global appetite for the highest-quality Chinese porcelain.”

92.9% of Chinese porcelain of the highest quality sold in the opening sale of Sotheby’s Asia Week New York sales, with 61.5% selling over their high estimates. From an Exceptionally Rare Anhua-Decorated Tianbai-Glazed Meiping to an Exceptionally Rare and Large Fine Blue and White Reserve-Decorated ‘Peony’ Dish, this themed-sale of carefully selected masterpieces from the 300-year reign of the Ming Dynasty honored the technical mastery and artistic vision of Chinese artisans and their Imperial Courts. IMPORTANT CHINESE ART
Total $10.9 Million
Estimate $9/12.9 Million
This season’s offering of Chinese Works of Art was led by an Exceptional ‘Jian’ ‘Nogime Temmoku’ Tea Bowl from the Southern Song Dynasty. The beautifully-potted work of art, with iridescent ‘hare’s fur’ striations was sought by several bidders in the room, driving the final price to $1.1 million (estimate $500/700,000). The top lots of this sale illustrated the diverse selection of property available to collectors of Chinese Works of Art: Two Extremely Rare Famille-Rose Figures of Ksitigarbha from the collection of Joan Oestreich Kend sold for $492,500, triple the low estimate, while a Gold and Silver-Inlaid Bronze Tapir-Form Vessel (Zun) attracted a great deal of interest, flying past its $20/30,000 pre-sale estimate to fetch $492,500. each modeled seated in dhyanasana with hands folded together on the lap supporting the cintamani (wish-fulfilling jewel), wearing brightly enameled robes of yellow, red and turquoise draped into voluminous folds, the serene face with downcast eyes and framed by a pair of pendulous ears, wearing a polychrome five-leaf diadem with each leaf enclosing the Amitabha, all supported on a double-lotus base, wood stands (4).

Note: The present figures of Ksitigarbha belong to a small group of famille-rose Buddhist figures created in the Qing dynasty using developments in porcelain production to successfully capture the long tradition of using bright colors to adorn deities of Tibetan Buddhism. The introduction of the famille-rose palette enabled craftsmen to produce porcelain figures and utilize the full spectrum of color schemes on Buddhist figures. However, probably due to the fragility of the modeling and the multiple firings required to achieve desired results, only a small numbers of figures appear to have been produced.

Known as Dayuan Dizang Pusa in China, Ksitigarbha is the supreme leader of the underworld. He vowed to take responsibility for the instruction of all beings in the six worlds and not achieve Buddhahood unless all hells were emptied. While in earlier eras he was depicted as a traditional bodhisattva, by the Song dynasty he was usually represented as a Buddhist monk dressed in monastic robes and holding a wish-fulfilling jewel (cintamani), as seen in the present examples. He was also shown holding a staff, which was used to alert insects and small animals of his approach so that he would not accidentally cause harm. His image is similar to that of the fictional version of Xuanzang (or Tang Sanzang) from the Chinese classical novel Journey to the West, so observers sometimes would misattribute them. finely cast after the archaic bronze wine vessel, the beast standing four square with head raised and ears pricked, the mouth slightly open and pierced below a curled snout, bearing a collar encircling the neck, the sides and haunches cast with scrolls and swirling patterns in low relief, with the long tapered tail swept to the side below a hinged circular cover, profusely decorated all over with archaistic motifs in silver inlay and gilt, the bronze with an enhanced greenish-brown patina with patches of malachite-green encrustation.

Later archaistic vessels of this form have historically been dated broadly to the Song to Ming dynasties, with a number attributed to the Yuan dynasty, such as one included in the exhibition Through the Prism of the Past. Antiquarian Trends in Chinese Art of the 16th to 18th Century, National Palace Museum, Taipei, 2008, cat. no. III-55. A slightly smaller vessel, similarly cast and inlaid is illustrated in Philip K. Hu, Later Chinese Bronzes. The Saint Louis Museum and Robert E. Kresko Collections, Saint Louis, 2008, pl. 6, where the author notes that the addition of low and medium cast relief patterns suggests a Ming dynasty manufacture. See also another similar example, acquired by Henri Cernuschi in 1896, attributed to the 16th to early 17th century, in the exhibition Bronzes de la Chine impériale des Song aux Qing, Musée Cernuschi, Paris, 2013, cat. no. 42.

With bids flying in from the United States, the Middle East, India and beyond, today’s sale of Indian, Himalayan and Southeast Asian Works of Art saw interest for works of art ranging from the 3rd to the 19th century. Works from important collections, including property from the Cleveland Museum of Art and selections from the Lanier Collection, sold particularly well. A Gilt-Bronze Figure of Tara from a private East coast collection was pursued by several collectors, soaring past its pre-sale estimate of $80/120,000 to achieve $588,500. 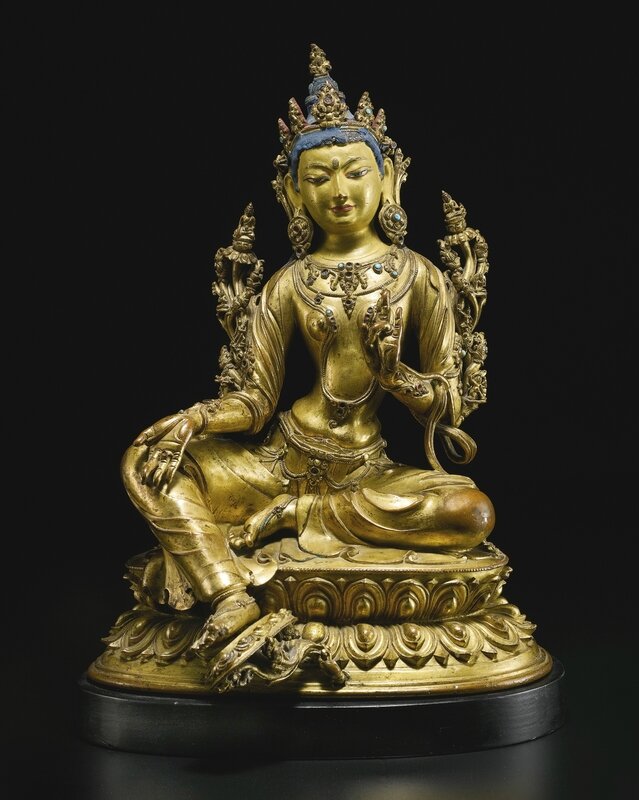 MODERN & CONTEMPORARY SOUTH ASIAN ART
Total $6.6 Million
Estimate $3.2/4.5 Million
Yamini Mehta, International Head of Indian and South Asian Art, noted: “Our commitment to India, through our highlights exhibition at the beautiful Leela Palace in Delhi and special events in Mumbai, London and New York, bore fruit this week, and we look forward to continuing to shape this market in our New York and London salesrooms in the years to come."

91.4% sold, with 67.9% of lots selling above their high estimate, paintings from the 19th, 20th and 21st centuries had a strong performance at the only auction of Modern & Contemporary South Asian Art this week. The cover lot of the sale, Raja Ravi Varma’s Untitled (Damayanti), an iconic image known to many Indian households, attracted over five bidders in the room, online and on the phones. Estimated at $500/700,000, this stunning oil on canvas sold for $1,692,500. This morning’s sale also found significant prices for works by Maqbool Fida Husain, Sayed Haider Raza, and a new auction record for Horace van Ruith. (separate release available)

Sotheby’s Classical Chinese Paintings department continues to go from strength to strength, with today’s sale of Fine Classical Chinese Paintings & Calligraphy achieving $14,365,750. Led by Zhu Da’s Flowers, Bids, Fish and Fruit, an ink on paper album of twelves leaves that sold for $3,132,500 (estimate 2.5/3.5 million), 88.2% of lots sold, with 73.1% of lots selling above their high estimate. Competition remained fierce throughout the sale with the second-to-last lot, Xu Beihong’s Lion, fetching $828,500, far above its pre-sale estimate of $150/200,000. 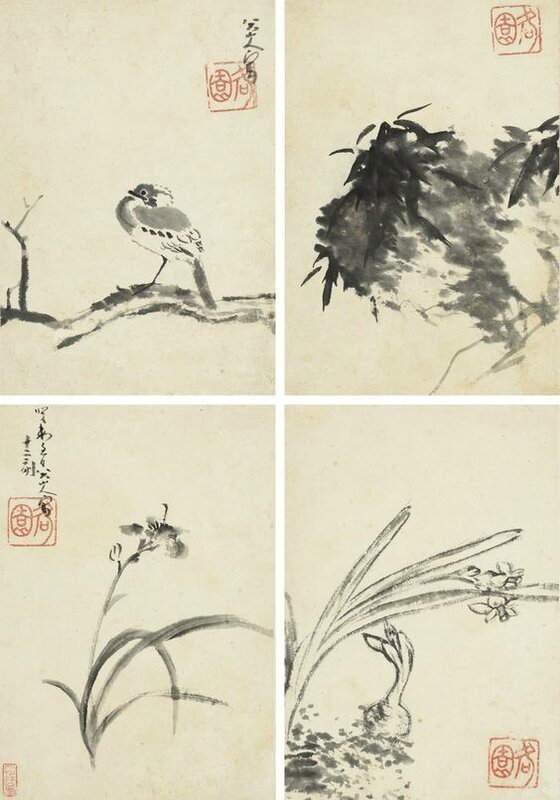