the pinkish stone weighing approximately 54.5 carats, incised with nasta'liq calligraphy, pierced through the centre and set with a later gold chain and hanging seed-pearl and metal-thread pendant, in bespoke velvet-lined box, with accompanying type-written letter; spinel: 2cm. on chain, with pendant: 38.3cm.  54.5 carats. From the fabled treasury of the Mughal emperors to the hands of a private collector in rural England, the storied history of this precious stone documents the genealogy of the imperial family at the height of their power and prestige.

Inscribed with the names of three royal patrons, and embodying concepts of identity, legitimacy and authority, this most coveted of gemstones, whose wine-dark hues evoke the light of dusk (shafaq), offers a rare insight into the private lives and dynastic preoccupations of India's greatest ruling house.

Whilst the practice of engraving precious stones with royal titles was certainly an ancient one, it was probably introduced to the Mughals through their ancestors the Timurids. Spinels were mined in Badakhshan, the region between Afghanistan and Tajikistan which came under Timurid control in the thirteenth century. Not actually recognised as spinels until the nineteenth century, these gemstones were originally considered to be rubies. A number of spinels erroneously made their way into famous collections as rubies, for example the magnificent ‘Timur Ruby’ in the Queen’s crown jewels. Passing through the hands of Tamerlane, Shah 'Abbas, five Mughal emperors, and Nadir Shah before entering Queen Victoria’s collection in 1850, it was subsequently discovered to be a spinel. The present spinel illustrates the practice amongst Mughal emperors of inscribing their names and dates on the precious stones in their possession and of passing them on to descendants. Inscribed with three royal titles, this spinel is particularly rare, and can be compared to another renowned spinel, the ‘Carew Spinel’ in the Victoria and Albert Museum (inv. no. IM.243-1922). Both examples were inscribed with the names of three generations of Mughal rulers, emperor Jahangir, Prince Khurram (the future emperor Shah Jahan) and emperor Alamgir (Aurangzeb). 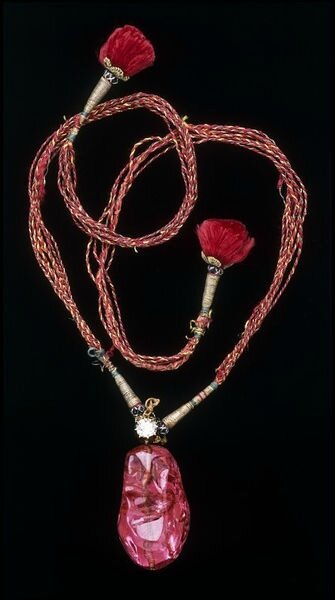 Many of the surviving gemstones are attributed to the period of emperor Jahangir (r.1605-27) who was particularly fond of this tradition. When Jacques de Coutre, a Flemish gem-cutter and jewel merchant visited Jahangir’s court, he described the emperor as covered with so many precious stones that he looked ‘like an idol… and had more jewels than all the monarchs of Europe put together’ (Stronge 2010, p.172). 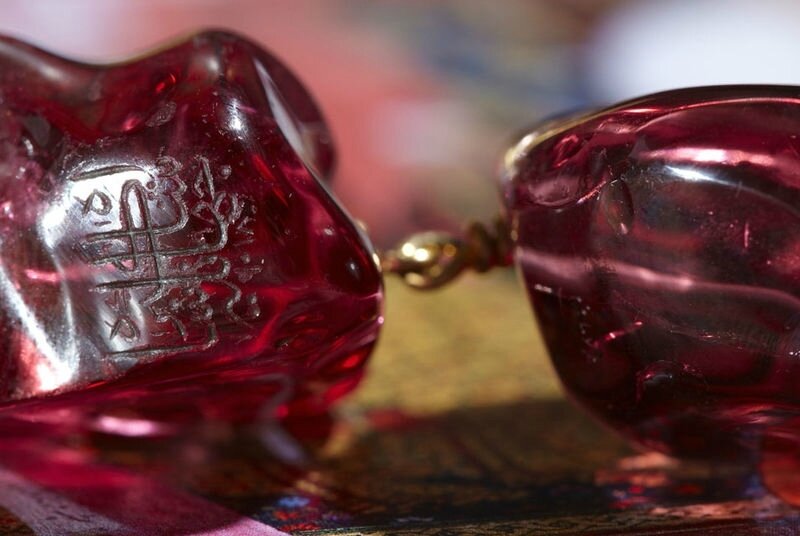