HONG KONG.- Sotheby’s Hong Kong will present Curiosity III on 4 April at the Hong Kong Convention and Exhibition Centre. The sale offers a total of 76 lots estimated in excess of HK$50 million / US$6.4 million *. Curiosity III features a gathering of objects formed by nature and man-made, a cross between the Western cabinet of curiosities and the Chinese scholar’s studio.

Nicolas Chow, Deputy Chairman, Sotheby’s Asia, International Head and Chairman, Chinese Works of Art, says, “This year’s curiosity cabinet brings together objects from ever more disparate spaces and time periods, from the Siberian tundra to Egypt and China, from the Jurassic period to Renaissance Europe. The centerpiece of the sale is the extremely rare 8th century lacquer head of a Bodhisattva, an object of transcendent beauty that will be shown for the first time to the public.” 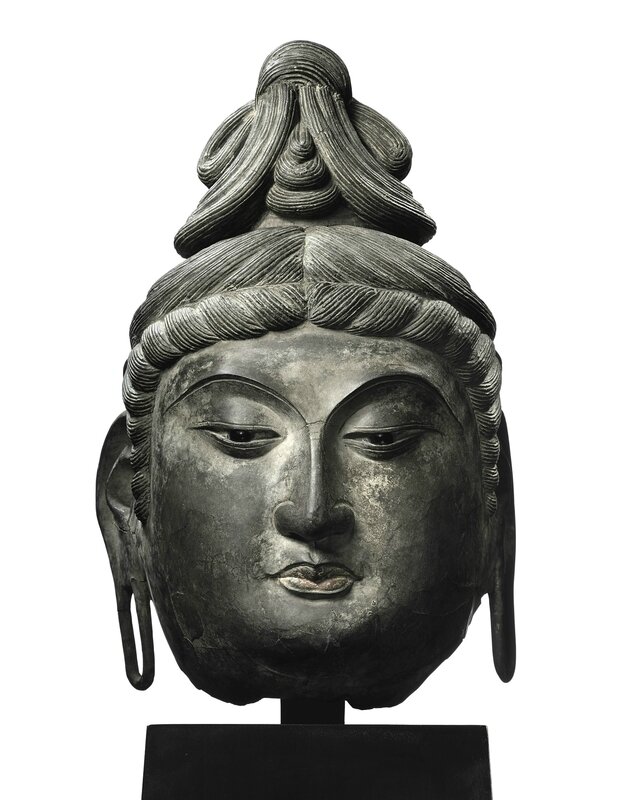 This unique sculpture of Avalokitesvara, a masterpiece of the use of dry-lacquer, was created in the High Tang period, probably during the reign of Emperor Xuanzang (r. 712-756). In its sensuous naturalism and intricacy of carving, this majestic image captivates the viewer as a personification of all that is admirable, desirable and reassuring in Buddhist thought. In spite of its genderless, spiritual beauty, this masterful sculpture appears to breathe with life. Dry-lacquer heads are extremely rare, with only a small number preserved in museum collections, and this example is in near-pristine condition. The closest comparable example in private hands is the head of Buddha from the collection of Gorō Sakamoto sold at Sotheby’s Hong Kong, October 2013 for HK$40.44 million. A T-rex of the Jurassic period, the Allosaurus is a type of dinosaur belonging to the subordinate group of Theropodas living 153 to 135 million years ago. Slightly smaller than the Tyrannosaurus Rex, its first fossils were discovered in 1877 by Othniel Charles Marsh. Ferocious, carnivorous, and likely much more agile than its larger cousin, the Allosaurus’ main weapon was its teeth, as evidenced by this enormous skull. They all curved backwards so the predator could bite down on its prey and prevent it from escaping. The Chukchi people are an ancient Arctic tribe inhabiting the tundra, an area of desolate wasteland in Northeastern Siberia; the treeless landscape has led them to adapt to their environment by making use of all natural resources. The only materials available for toolmaking are antlers, bones and a little wood as the inland Chukchi are herders of reindeer and those on the coast rely on fishing, so the discovery of a piece of 10,000-year-old mammoth tusk would be a valuable and much prized find. The present pair of goggles with their fine carving, smooth finish and traces of polychrome would have been greatly appreciated and must have belonged to a person of status within society. This wax head appears to have been produced as an anatomical model. Such sculptures were in great demand as visual aids for medical students in the eighteenth century. The tradition of creating realistic wax anatomical sculptures was first started by Giuseppe Ferrini in 1771. It was the Italian sculptor, Clemente Susini, who epitomised the realism of these vividly accurate models. The models were based in part on anatomical drawings, and in part on corpses dissected by anatomists such as Felice Fontana and Paolo Mascagni. Although created for use as an educational figure of anatomy, the present model was later installed on a pedestal possibly to create a memento mori. From the sixteenth century, skulls were commonly used as memento mori (‘Remembrance of death’) as they symbolised the transience of human life. 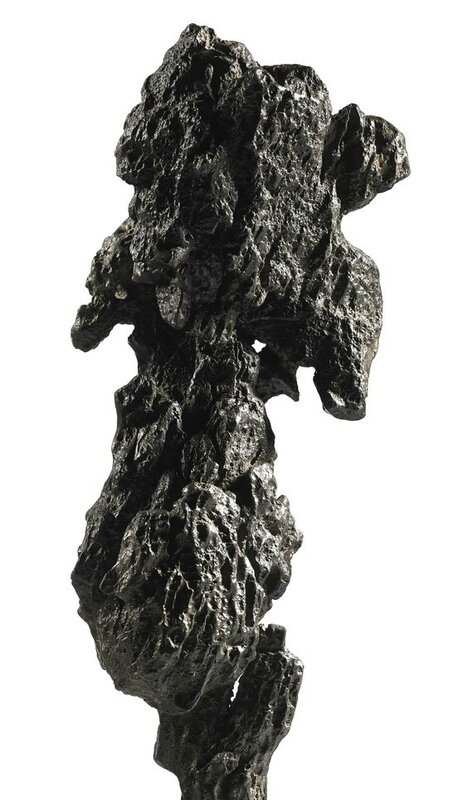 Powerfully wrought out to stand vertically on a tapering point, the elongated structure is punctuated overall by protrusions. This dark grey ‘Ying’ limestone is pitted with an uneven surface. This rock is presented together with an ink on paper hanging scroll painting by Liu Dan (pictured below) of one view of the rock, inscribed description of the rock and four seals of the artist, painted in Beijing in 2005. While many of his works of rocks are larger-than-life representations, the present lot is a life-size reproduction of the rock, painstakingly matching every nook and crag to the fullest detail. Liu has often referred to rocks as the ‘stem cells of landscape’: from small basic units, both in painting and in the natural world.

After graduating from Jiangsu Chinese Painting Institute during the late 1970s, Liu Dan moved to the United States in 1981 and lived there and in the United Kingdom through 2004.  He painted this painting shortly after he returned to China in 2005. Living abroad for more than twenty years, Liu developed a deep knowledge of contemporary trends in Western art.  However, he chooses to work both within and beyond the Chinese ink tradition, consistently producing works that are among the most compelling contemporary landscape paintings in this traditional medium. In his treatment of stone and landscapes, the works of Northern Song (960-1127) masters are Liu's most evident sources of inspiration.

While many of his works of rocks are larger-than-life representations, the present lot is a life-size reproduction of the rock, painstakingly matching every nook and crag to the fullest detail. Liu has often referred to rocks as the 'stem cells of landscape': from small basic units, both in painting and in the natural world. Aphrodite is primarily worshipped as the Greek Goddess of Love, Beauty, Pleasure and Eternal Youth. The wood stand bears the stamp of Japanese wood artist Kichizô Inagaki (1876-1951). His bases are celebrated as works of art for their own sake because each is created to fit its sculpture perfectly, sculpture and base ultimately unifying as a cohesive object. While working for Joseph Brummer, Inagaki made prestigious connections among key dealers, collectors, and avant-garde artists in early 20th century Paris and thereby gained his greatest commissions. Auguste Rodin, for example, put Inagaki in charge of creating bases for his entire collection of antiquities in 1912. 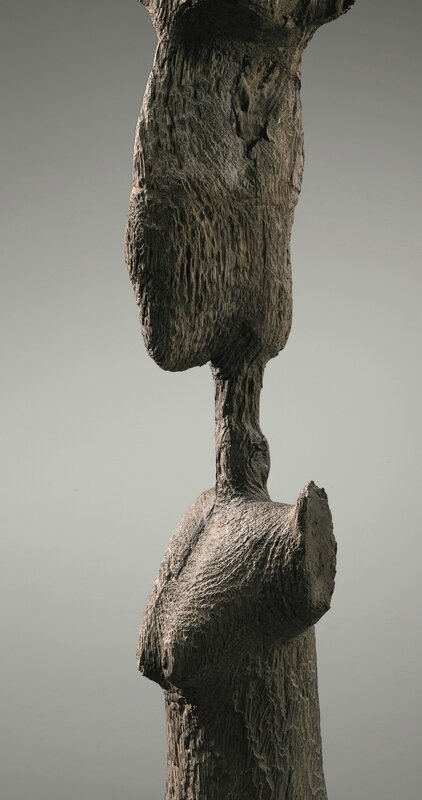 Created to reveal the values borne by the Jo and the Bamana beauty canons, this African statue evokes not only the status of the female founder of the cults and associated beliefs, but also that of the mother and accomplished woman. Today, the figure is pared down to its intimate spiritual essence and the passage of time has softened its forms, revealing its austere and tender beauty. This figure – a commanding representation of the power of the revered female entity – is an illustration of the extreme refinement of Bamana art within this rare corpus of works dated between the 13th and 17th century. A gogotte is a millions-of-years old naturally shaped mineral rarity consisting of tiny quartz fragments held together by calcium carbonate. As an underground water stream slowly filters through sand, these tears of stone are frozen upside down in eternal flight. The most prized examples of gogottes are found in Fontainebleau, France, where they have been protected in a sandy basin for over 30 million years. Known to have inspired artists from the Surrealist Art movement, including Jean Arp, these wonderful forms can compare to the most beautiful modern sculpture. This current gogotte is very rare in size and is a very spectacular specimen.