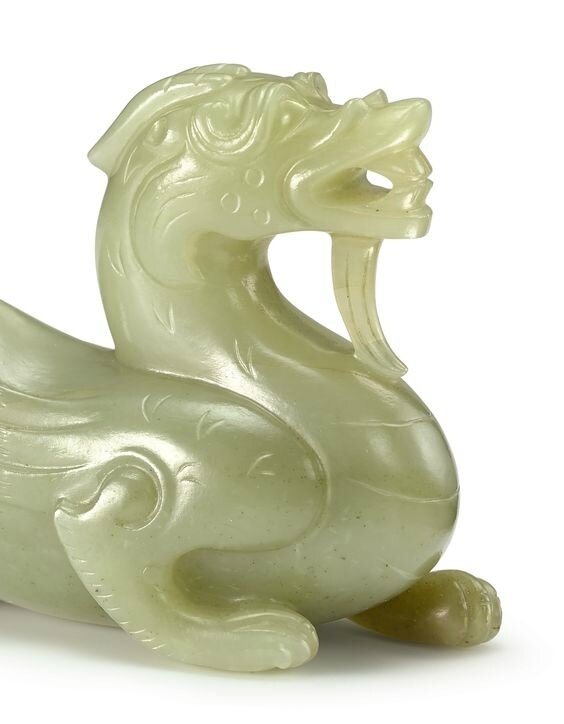 powerfully worked in the form of a prowling bixie with the left front leg striding forward, the horned mythical beast portrayed menacing with the head held high and an open mouth baring its teeth, below thick eyebrows and a pair of horns, the cheeks detailed with circular motifs, above the beard falling on the scaly chest, the muscular body accentuated with a prominent spinal curve and flanked by a pair of wings extending from the front haunches, the stone of a warm greenish-yellow colour with faint grey patches to one side, hardwood stand - 7.7 cm, 3 in.

Note: The Han dynasty saw a heightened interest in the representation of powerful mythical creatures in durable materials such as stone and jade. In distinct contrast to pottery figures of humans, animals and mythical beasts mass-produced for tombs to provide support in the afterlife, the function of these lifelike sculptures made from durable materials was to embody and pacify the elemental and supernatural forces of the living world. Large stone figures of ferocious beasts including lions and tigers, and imaginary winged figures, were all placed on the tomb avenues of emperors and high ranking officials and military commanders, a tradition that flourished and reached a peak during the Six Dynasties, when immense fabulous beasts drawn from the spiritual world were produced on a grand scale outside the tombs near Nanjing. Simultaneously, an artistic tradition of creating jade animals of the highest quality flourished. In contrast to the majority of earlier two-dimensional jade carvings, made for the afterlife or to adorn the individual, these figural sculptures were created in the round as independent objects, not just as sumptuous display items for the appreciation of the elite, but also to provide the owner with a constant and concrete realisation of the powerful supernatural forces latent in the world around.

Evidence of this rich tradition of craftsmanship has been transmitted down through a small number of high quality carvings, of which the current bixie (‘auspicious beast’) is a superb example, perfectly encapsulating this tradition. In its exquisite articulation from a lustrous yellowish-green pebble in which the full contours have been so skillfully and compactly utilised, it is a truly outstanding sculpture, a tour-de-force of carving which so skilfully captures the dynamic movement and powerful ferocious expression of the beast.

Only a small number of jade mythical beasts of this quality is preserved in museum and private collections. The closest comparable example is a jade bixie in the National Palace Museum, Taipei, dated to the Eastern Han, included in the museum's exhibition Splendid Treasures. A Hundred Masterpieces of the National Palace Museum on Parade, Taipei, 2012, cat. no. 18. Its poise is slightly more upright than on the current figure, depicted already in motion, not crouched in anticipation of impending movement, and the tail is depicted dropping down. The stone is a deeper russet colour, and it is larger (13.2 cm long). Overall, it shares the same fundamental features as the current jade bixie: the powerful articulation of the muscular winged body, the treatment of the ferocious expression on the dynamic head held high, with beard coiling down to the chest; the fine striated lines, especially on the scales and at the edges, so typical of early Han jades, with strong bands of relief and deeply incised curved lines that radiate around the body, enhancing the overall sculptural quality; and the short curved wings emanating at the sides.

Another close comparable is an Eastern Han jade bixie of similar form in the Arthur M. Sackler Gallery (S1987.26), formerly in the collection of Desmond Gure, included in the exhibition Chinese Jade Animals, Hong Kong, 1996, cat. no 42, and illustrated by Jessica Rawson, Chinese Jade from the Neolithic to the Qing, London, 1995, fig. 73. It is depicted as if in mid stride, and differs from these other two beasts in that there is a winged rider seated on its back, but is otherwise stylistically close, with similar powerful modelling.

Only a small number of jade animals of this quality has ever appeared at auction, including a yellow jade figure of a mythical beast, formerly in the collection of Xu Hanqing, sold at Christie’s New York, 15th September 2011, lot 888 and more recently in these rooms, 6th April 2016, lot 3025, and a crouching animal sold in our New York rooms, 2nd November 1979, lot 51, and now in the collection of Sir Joseph Hotung. Catalogued as Six Dynasties in the 1979 auction, the Hotung example was more recently redated to the Han period by Jessica Rawson, Chinese Jade from the Neolithic to the Qing, London, 1995, pl. 26:7, on account of its similarity to a jade bixie discovered in 1972 at Xianyang near present-day Xian, near the tomb of the Han Emperor Yuandi (r. 48-33 BC), now housed in the collection of Xianyang City Museum, and illustrated in Zhongguo wenwu jinghua dacidian: jin yin yu shi juan [The Compendium of Chinese Art: Gold, Silver, Jade and Stones], Shanghai, 1996, p.54, pl. 166.

For a Six Dynasties jade beast of comparable quality, see Chinese jades from a private collection, Eskenazi, London, 1976, cat. no. 7. Previously exhibited in the Stockholm exhibition Celadon-Jade, 1963 and published in the catalogue by Bo Gyllensvärd as cat. no. 65, it was also included in the 1975 Victoria and Albert Museum exhibition Chinese Jade throughout the Ages, illustrated by Jessica Rawson and John Ayers, London, 1975, cat. no. 186. It depicts a crouching lion or chimera with similar bold modelling in the round, with closely related use of fine striated lines to convey the combed arcs of the fur, grooved folds on the chest and skilfully incised spirals, and a similar dynamic posture of impending movement. The catalogue notes that "this type of fabulous animal is related to the monumental stone sculptures found outside tombs near Nanking, which were made during the latter part of the Six Dynasties", referencing Osvald Siren, Chinese Sculpture, vol. 2, London, 1925, pls 3-7 and 9-13.

Lady Mary Stewart (1916-2014) was a renowned British novelist who developed the romantic mystery genre and found great success with the Merlin Trilogy. Her husband, Sir Frederick Stewart (1916-2001) was a leading geologist and mineralogist who held several senior positions including trustee of the Natural History Museum and, in his retirement, Professor Emeritus of Edinburgh University.