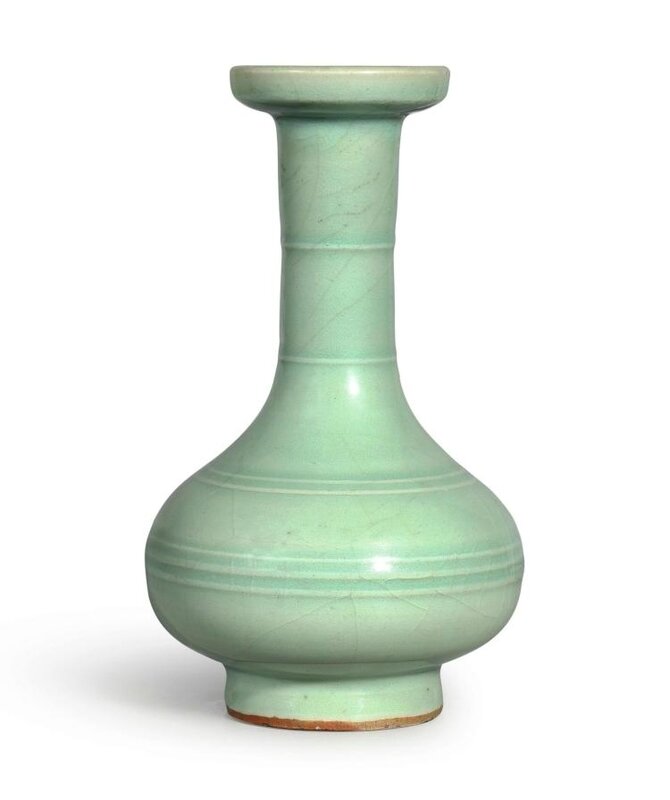 the pear-shaped body rising from a slightly splayed foot to a tall cylindrical neck, sweeping up to a wide everted rim, the exterior applied with horizontal fillets simulating bamboo, covered overall in a translucent sea-green glaze save for the footring fired to buff-orange - 25.1 cm, 9 7/8  in.

Note: Skilfully potted with a subtle balance of the compressed body and the elongated neck emphasised by the raised fillets, this Longquan celadon vase represents an elegant form which has been sought after since the Southern Song period. Three examples of this shape with variations in proportion and in the shape of the rim, were recovered from a large hoard of ceramics in Sichuan province, dated to the Southern Song dynasty, illustrated in Newly Discovered Southern Song Ceramics: A Thirteenth Century “Time Capsule”, Odakyu Bijutsukan, Tokyo, 1998, cat. nos 2, 3 and 5. Another bamboo-neck vase in the collection of the British Museum, also with a cup-shaped mouth close to that of the present vase, but the neck less accentuated and dated to the Southern Song dynasty, is published in Stacey Pierson, Illustrated Catalogue of Celadon Wares in the Percival David Foundation of Chinese Art, London, 1997, no. 202. See also a larger vase, but the mouth of a slightly different form, dated to Southern Song to Yuan dynasty, in the collection of the National Palace Museum, Taipei. It was included in Green – Longquan Celadon of the Ming Dynasty, National Palace Museum, Taipei, 2009, cat. no. 151, where a link between these raised fillets and decoration on metalwares is proposed. It is also mentioned that similar vases are illustrated in books on flower arrangement (ikebana) from the Muromachi period (1336-1573), suggesting this type of vases was made for holding flower.