An important Imperial yellow dish, Mark and period of Chenghua (1465-1487)

An important Imperial yellow dish, Mark and period of Chenghua (1465-1487) 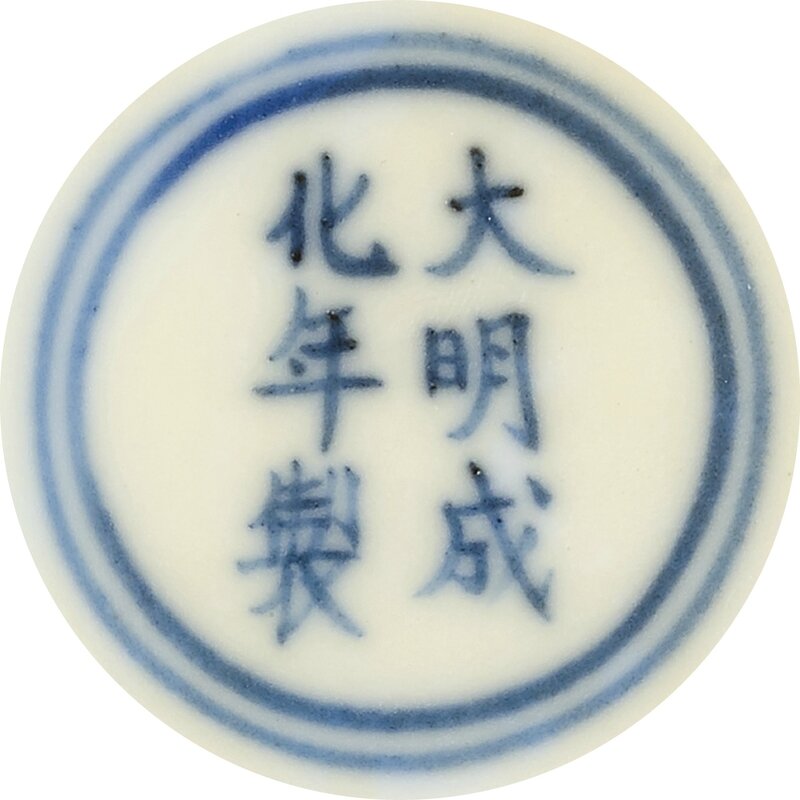 delicately potted with rounded sides rising from a short tapering foot to a gently flaring rim, covered overall with a yellow glaze of pale egg-yolk tone applied over a transparent glaze, the footrim burnt yellow around the unglazed edge, the white-glazed base inscribed in underglaze blue with a six-character reign mark within double circles, later engraved with a tian ('sweet') character - 14.8 cm, 5 7/8  in.

Porcelains of Chenghua mark and period (1465-87) – whatever their shape, colour or design – are synonymous with finest quality and utmost rarity. Chenghua porcelains with yellow glaze are particularly rare. No more than some twenty monochrome yellow dishes of Chenghua mark and period, in various sizes, with flared as well as straight rim, are recorded worldwide, all but three today in museum collections, and only four dishes including the present one ever seem to have appeared at auction.

Since yellow Chenghua porcelains are noticeably absent from the publications of excavated material recovered from the imperial kiln site in Jingdezhen, Julian Thompson, on a visit to Jingdezhen in the 1990s asked the then head of the archaeological team there, Liu Xinyuan, whether he had discovered any yellow Chenghua sherds. Liu motioned to his assistants, who instantly brought out of storage a large crate filled to the brim exclusively with broken pieces of yellow Chenghua porcelain. When we looked at this incredulously, he told us that in his Institute there were many such crates of yellow sherds recovered from the Chenghua stratum of the kiln site. This overwhelming quantity of deliberately discarded imperial yellow pieces impressively underlines the notion of the ultra-avid quality control and the severe restriction of porcelains allowed to leave the imperial manufacturing site and delivered to the palace in Beijing during the reign of the Chenghua Emperor.

As a characteristic example of Chenghua porcelain, the present dish has the superb silky tactility of imperial porcelains of this period that even a blind test reveals, which is unsurpassed and was never equalled again in any other period. Another typical feature, perhaps less intentional but probably a natural consequence of the specific composition and firing technology of these wares, is the idiosyncratic, slightly smoky appearance of the transparent glaze on the white base, which can equally be seen on the bases of the yellow Chenghua dishes in the National Palace Museum, Taipei, for example (see the references, Taipei 2003, listed below).

Julian Thompson, ‘List of Patterns of Chenghua Porcelain in Collections Worldwide’, in The Emperor’s broken china. Reconstructing Chenghua porcelain, Sotheby’s, London, 1995, p. 122 and p. 128 (M6), lists only two yellow Chenghua companion dishes, of the same shape and size, one in the Shanghai Museum, illustrated in Lu Minghua, Shanghai Bowuguan cangpin yanjiu daxi/Studies of the Shanghai Museum Collections : A Series of Monographs. Mingdai guanyao ciqi [Ming imperial porcelain], Shanghai, 2007, pl. 3-68 (fig. 1); and one, with the same later engraved mark as the present dish, from the collection of Mr and Mrs R.H.R. Palmer, sold in our London rooms, 28th May 1968, lot 99; a third companion dish has since been published, in the collection of the Palace Museum, Beijing, see Zhongguo taoci quanji [Complete series on Chinese ceramics], Shanghai, 1999-2000, vol. 13, pl. 35.

The inventory of the holdings of the National Palace Museum, Gugong ciqi lu [Record of porcelains from the Old Palace], lists seven plain yellow dishes of Chenghua mark and period in the collection, three slightly larger ones of similar shape, with flared rim, three with straight rim, and one with flared rim and yellow exterior but white interior, covered with a transparent instead of a yellow glaze; four of these were included in the exhibition Chenghua ciqi tezhan/Special Exhibition of Ch’eng-hua Porcelain Ware, 1465-1487, National Palace Museum, Taipei, 2003, cat. nos 90-93.

Two larger dishes with straight rim are recorded by Thompson to be preserved in the Palace Museum, Beijing, one of them illustrated in The Complete Collection of Treasures of the Palace Museum. Monochrome Porcelain, Hong Kong, 1999, pl. 35. Two yellow Chenghua dishes from the Sir Percival David Collection in the British Museum, are illustrated in Rosemary Scott & Stacey Pierson, Flawless Porcelains: Imperial Ceramics from the Reign of the Chenghua Emperor, London, 1995, pls 29 and 30, both larger. 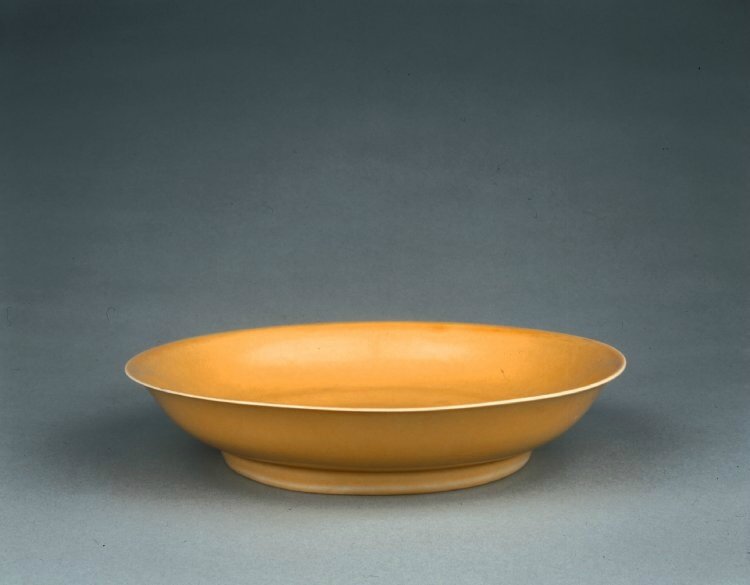 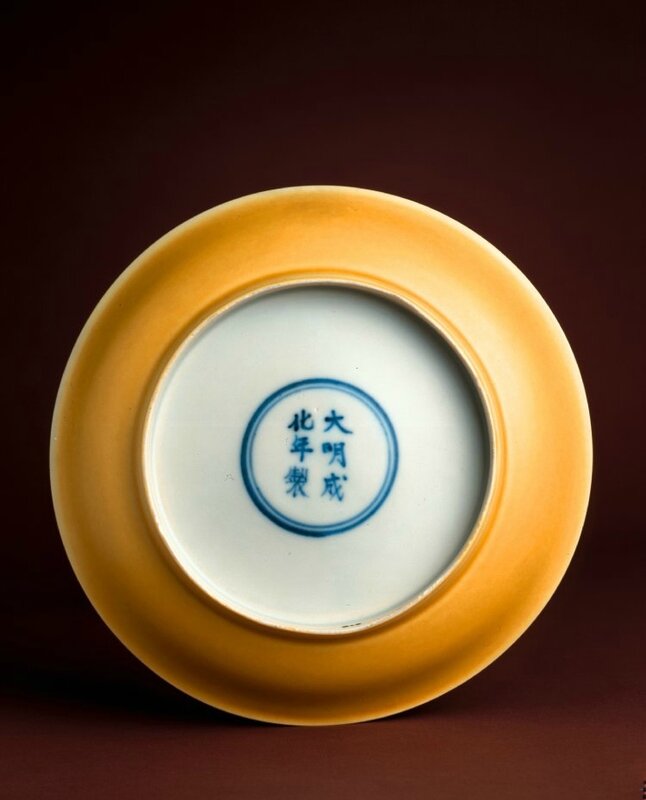 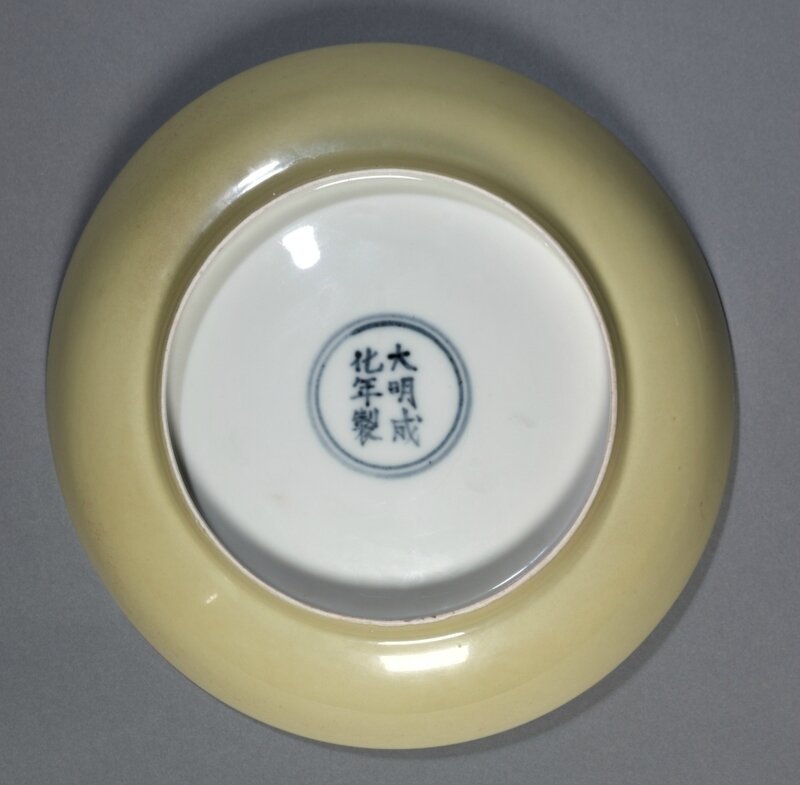 The present dish has a surprising history, as it was bought at Sotheby’s by John Sparks Ltd for £ 2,200, with Bluett & Sons being the underbidders with a bid from Lord Cunliffe at £ 2,000. A year later the dish reappeared at auction and was bought by Bluett’s for £ 170, and sold on to Roger Pilkington for £ 480.