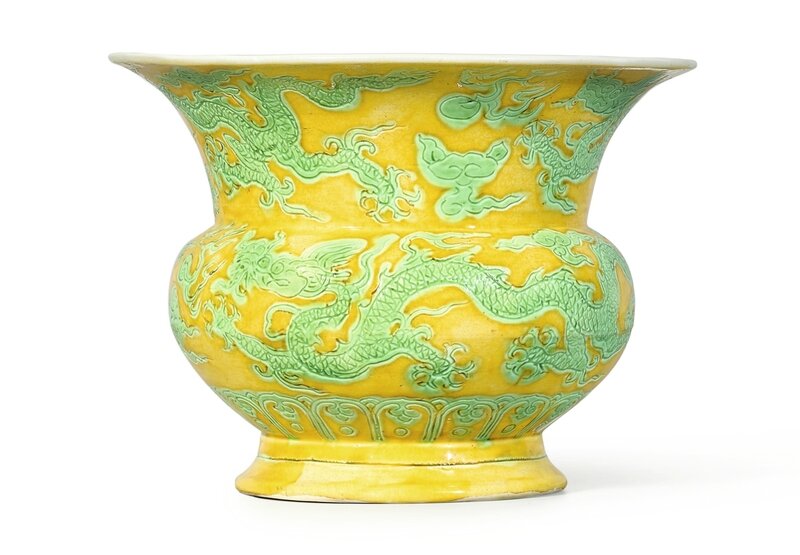 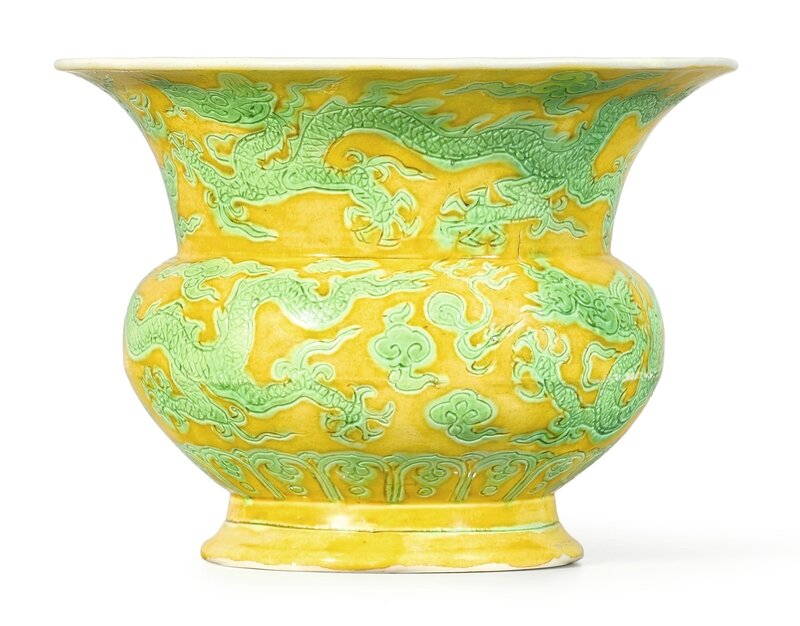 the compressed globular body rising from a splayed foot to a wide neck flaring at the rim, brightly decorated around the exterior with incised details picked out in bright green enamel and reserved on a deep yellow ground, depicting four five-clawed dragons striding among stylised clouds in pursuit of a 'flaming pearl', their writhing scaly bodies emitting flames, above a band of petal lappets and a single-line fillet encircling the foot, the interior and the base left white, the base inscribed in underglaze blue with a four-character reign mark within double circles - 14.8 cm, 5 7/8  in.

Note: This green-and-yellow dragon pattern is one of the classic designs of the Zhengde reign (1506-22). The colour scheme was among the first the Jingdezhen potters experimented with when the imperial kilns started to enlarge their range of colours and designs in the Yongle period (1403-24). Although no surviving examples are known from that or the following reigns and no successfully fired pieces may have left the kilns at all, discarded samples of a dish and a small ewer and cover, both decorated with incised dragons and clouds in green on a yellow ground, have been recovered from the Yongle stratum of the waste heaps of the imperial kiln site; trials are equally known from the Xuande (1426-35) and Chenghua (1465-87) periods, sometimes with the design incised, sometimes raised in slip relief, but the colour scheme only appears to have entered into regular production for the court in the Zhengde period; for earlier discarded experiments excavated at the kiln site see the exhibition catalogues Imperial Hongwu and Yongle Porcelain Excavated at Jingdezhen, Chang Foundation, Taipei, 1996, cat. nos 109 and 130; Jingdezhen chutu Ming Xuande guanyao ciqi/Xuande Imperial Porcelain Excavated at Jingdezhen, Chang Foundation, Taipei, 1998, cat. no. 73; and A Legacy of Chenghua: Imperial Porcelain of the Chenghua Reign Excavated from Zhushan, Jingdezhen, The Tsui Museum of Art, Hong Kong, 1993, cat. nos B 20 and B 30.

A zhadou of this design is published in Jessica Harrison-Hall, Ming Ceramics in the British Museum, London, 2001, pl. 8:32, together with two dishes and a bowl of matching green-and-yellow dragon design, pls 8:29-8:31, all with four-character Zhengde reign marks; two similar vessels are in the Sir Percival David Collection in the British Museum, illustrated in Margaret Medley, The Chinese Potter, Oxford, 1976, fig. 154 (A 734), and Margaret Medley, Illustrated Catalogue of Ming Polychrome Wares, Percival David Foundation of Chinese Art, London, 1978, no. 33, pl. IV (PDF A 735); Medley notes, ibid., 1978, p. 20, that the two jars differ slightly “in that the body [of A 735] is thicker and heavier; the yellow is also darker, and the green enamel has spilled over into the yellow ground”; another example is illustrated in John Ayers, Chinese Ceramics in the Baur Collection, Geneva, 1999, vol. 1, pl. 70; one in the Metropolitan Museum of Art, New York, is published in Suzanne G. Valenstein, The Herzman Collection of Chinese Ceramics, New York, 1992, pl. 93; one in the Freer Gallery was included in the exhibition Ming Porcelains in the Freer Gallery of Art, Smithsonian Institution, Washington, D.C., 1953, cat. no. 30; and one from the collection of Victor C. Novotny, sold in our New York rooms, 18th September 1996, lot 189, is published in Regina Krahl, Chinese Ceramics from the Meiyintang Collection, London, 1994-2010, vol. 4, no. 1682. Green-and-yellow zhadou with dragons, Ming dynasty, Zhengde Four-character Zhengde mark in a double circle in underglaze blue on the base and period, AD 1506–21. On loan from Sir Percival David Foundation of Chinese Art, PDF A734 © Trustees of the British Museum Zhadou with dragons, Ming dynasty, Zhengde Four-character Zhengde mark in a double circle in underglaze blue on the base and period, AD 1506–21. On loan from Sir Percival David Foundation of Chinese Art, PDF A735 © Trustees of the British Museum 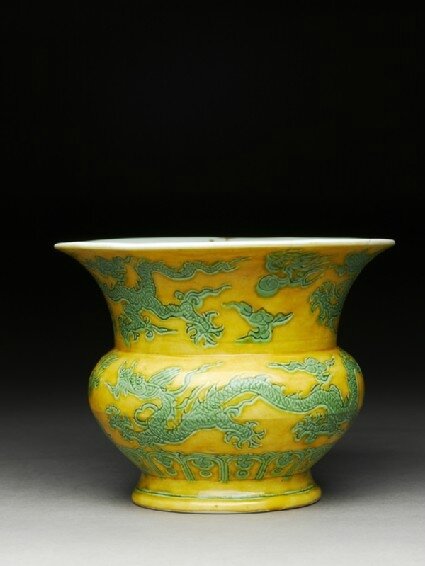