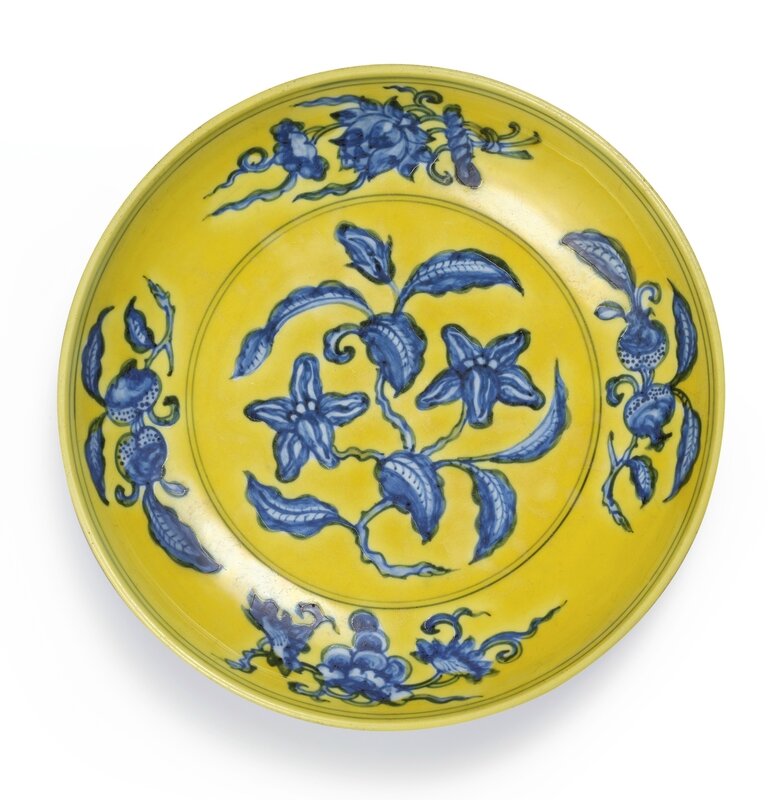 the shallow rounded sides rising from a slightly tapered foot, freely painted on the interior in shaded tones of cobalt with a leafy branch bearing two five-petalled gardenia blooms and a tightly closed bud, encircled on the cavetto by fruiting branches of pomegranate, grape, peach and a beribboned lotus bouquet, all between double-line borders, the underside with a continuous floral scroll of six blooming roses borne on a foliate stem, between double lines at the rim and foot, all reserved on a deep yellow enamel ground, save for a white base inscribed in underglaze blue with a four-character reign mark within double circles - 21.6 cm, 8 1/2  in.

This gardenia design, which is known from examples ranging from the Xuande (1426-35) to the Jiajing (1522-66) period and was executed in blue-against-yellow, blue-and-white, and brown-and-white, underwent a distinct style change in the Zhengde reign (1506-21). Dishes of this pattern were then produced also in smaller sizes than before, the central design was tightened, the arrangement of the surrounding branches altered, with the lotus bouquet placed straight above the gardenia branch, the crab apple replaced by the peach, and the mark generally reduced from a six- to a four-character version – the prevalent imperial mark of the time. These changes are very apparent when comparing the present dish to the Hongzhi example (1488-1505) in this sale, also from the collection of Roger and Maureen Pilkington, lot 2.

A companion dish of Zhengde mark and period, of similar size, in the Palace Museum, Beijing, is illustrated in The Complete Collection of Treasures of the Palace Museum. Blue and White Porcelain with Underglazed Red, Shanghai, 2000, vol. II, pl. 233, together with Chenghua (1465-87) and Hongzhi versions, pls 230 and 231; two dishes of this design, one of similar size, the other slightly smaller, are in the British Museum, illustrated in Jessica Harrison-Hall, Ming Ceramics in the British Museum, London, 2001, pls 8:23 and 8:24; another somewhat smaller example in the Sir Percival David Collection, now also in the British Museum, is illustrated in Soame Jenyns, Ming Pottery and Porcelain, rev. ed., London, 1988, col. pl. H, together with three earlier blue-and-yellow dishes of this design, pls 102-104; another smaller dish of this design and reign mark in the Shanghai Museum is illustrated in Lu Minghua, Shanghai Bowuguan cangpin yanjiu daxi/Studies of the Shanghai Museum Collections : A Series of Monographs. Mingdai guanyao ciqi [Ming imperial porcelain], Shanghai, 2007, pl. 1-41; and one from the Toguri Museum of Art, Tokyo, illustrated in Fujioka Ryoichi & Hasebe Gakuji, eds, Sekai tōji zenshū/Ceramic Art of the World, vol. XIV: Min/Ming Dynasty, Tokyo, 1976, col. pl. 171, was sold in these rooms, 8th October 2013, lot 213. Dish with gardenia, Ming dynasty, Zhengde six-character mark in a double circle in underglaze blue on the base and period, AD 1506–1521, Porcelain with underglaze blue decoration and yellow glaze, Jingdezhen, Jiangxi province. On loan from Sir Percival David Foundation of Chinese Art, PDF A743 © Trustees of the British Museum 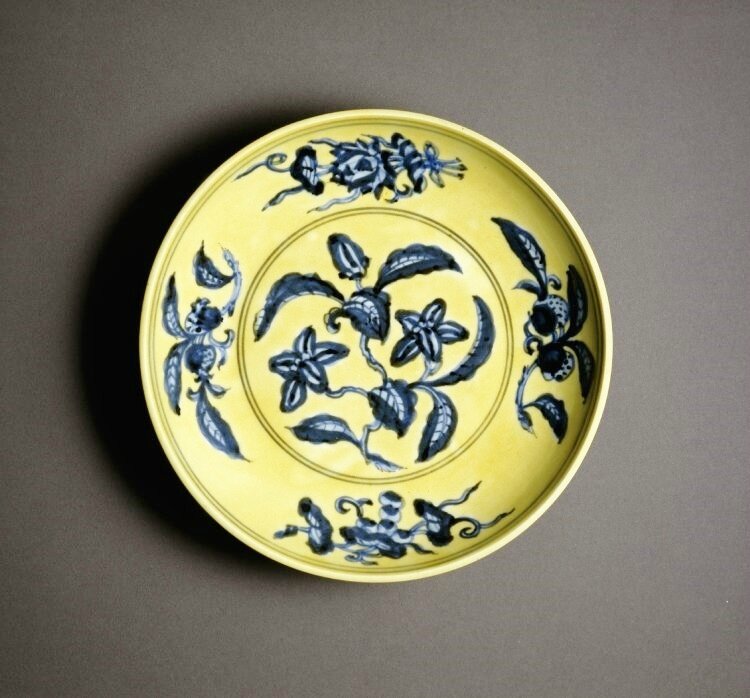 (Cf. An underglaze-blue and yellow-enamel 'Gardenia' dish, Mark and period of Zhengde)

An unusual larger dish of this design, with a six-character Zhengde reign mark, excavated in Beijing and now in the Capital Museum, Beijing, is illustrated in Zhongguo taoci quanji [Complete series on Chinese ceramics], Shanghai, 1999-2000, vol. 13, pl. 147.