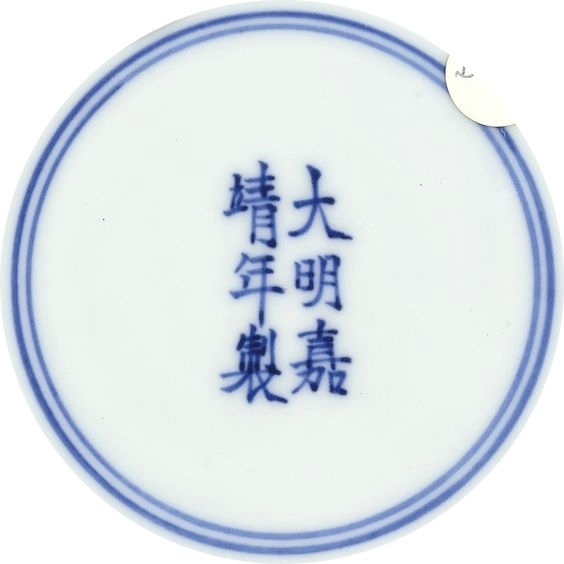 the shallow rounded sides supported on a short tapered foot, painted to the interior with a central medallion enclosing a pair of five-clawed dragons, their sinuous scaly bodies writhing amongst stylised ruyi cloud scrolls, all encircled by double line borders repeated at the rim, the exterior decorated with eight sets of stylised cloud and flame scrolls between line borders, all reserved against a rich egg-yolk yellow ground, the white base inscribed with a six-character reign mark in underglaze blue within double circles - 16.4 cm, 6 1/2  in.

Note: This dish, with its seemingly classic design, appears to be unique, although a few imperial porcelains of Jiajing mark and period with blue-and-yellow dragon designs are preserved, as well as a few dishes with the same design in blue-and-white. With the Jiajing reign mark enclosed within double circles, it is a particularly fine example, as most comparable wares bear the much less prestigious reign mark without double rings. The present dish is also remarkable for its highly idiosyncratic stylised cloud and flame motifs on the outside, which is otherwise extremely rarely seen.

Dishes of this design, with the same cloud-and-flame pattern on the outside are otherwise known only in blue-and-white; see, for example, two dishes sold in these rooms, 20th May 1980, lots 55 and 56, the latter sold again in our New York rooms, 20th September 2000, lot 108.

The only comparable blue-and-yellow dishes of the Jiajing period are of smaller size, with barbed rim, painted with a single dragon surrounded by peach branches, and inscribed with an unbordered reign mark; see a dish sold in these rooms, 1st November 1994, lot 49, and a pair from the J.M. Hu collection, sold at Christie’s New York, 19th/20th September 2013, lot 1297. A Jiajing square bowl with blue dragons against a yellow ground, also with the unbordered reign mark, was included in the exhibition Enlightening Elegance. Imperial Porcelain of the Mid to Late Ming: The Huaihaitang Collection, Art Museum, Institute of Chinese Studies, The Chinese University of Hong Kong, Hong Kong, 2012, cat. no. 70; but a jue in the British Museum, painted with blue dragons against a yellow ground, has the reign mark inscribed within a double ring; see Jessica Harrison-Hall, Ming Ceramics in the British Museum, London, 2001, pl. 9:86. Compare also a much smaller yellow dish with blue dragon design, of Wanli mark and period, sold at Christie’s Hong Kong, 28th November 2012, lot 2214.