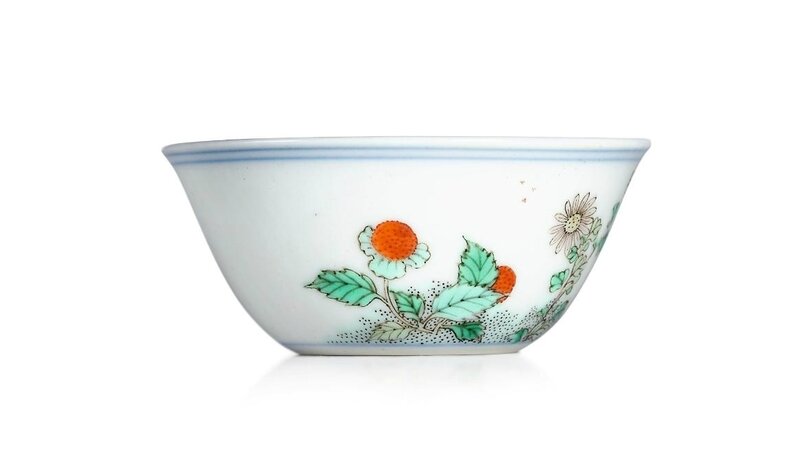 with delicately potted rounded sides rising from a countersunk base to a gently flared rim, the exterior finely decorated with fluttering butterflies on one side and flowering plants borne on leafy stems issuing from the ground on the other, the interior picked out with an iron-red butterfly, the base inscribed in underglaze blue with a six-character reign mark within a double square

Note: Exquisitely painted with butterflies in flight and delicate flowering and fruiting sprays, cups of this type are a testament to the technical developments achieved at Jingdezhen in the early Qing dynasty. The fine and thinly potted body, its smooth tactile glaze, and skilful application of the coloured enamels as well as the square reign mark, are all characteristics of porcelain made under Lang Tingji, who was appointed Prefect of Jiangxi province on the 44th year of the Kangxi reign (1705). Lang encouraged potters to produce porcelain in imitation of Ming wares, particularly those from the Chenghua reign which this cup attempts to emulate.

Cups of this form and design are rare, although a similar motif is known on a Kangxi mark and period cup with a small foot and flared sides, in the Palace Museum, Beijing, illustrated in The Complete Collection of Treasures in the Palace Museum. Porcelains in Polychrome and Contrasting Colours, Hong Kong, 1999, pl. 120; and on a pair of cups, also with Kangxi mark and of the period but written within double circles, included in the exhibition Chinese Porcelain. The S.C. Ko Tianminlou Collection, Hong Kong Museum of Art, Hong Kong, 1987, vol. I, cat. no. 86. See also cups of this type but painted with asters and butterflies, such as one in the Shanghai Museum, Shanghai, illustrated in Kangxi Porcelain Wares, Hong Kong, 1998, pl. 93; and two sold in these rooms, the first from the collection of Iver Munthe Daae, 8th October 2010, lot 2604, and the second, 7th October 2015, lot 3636.