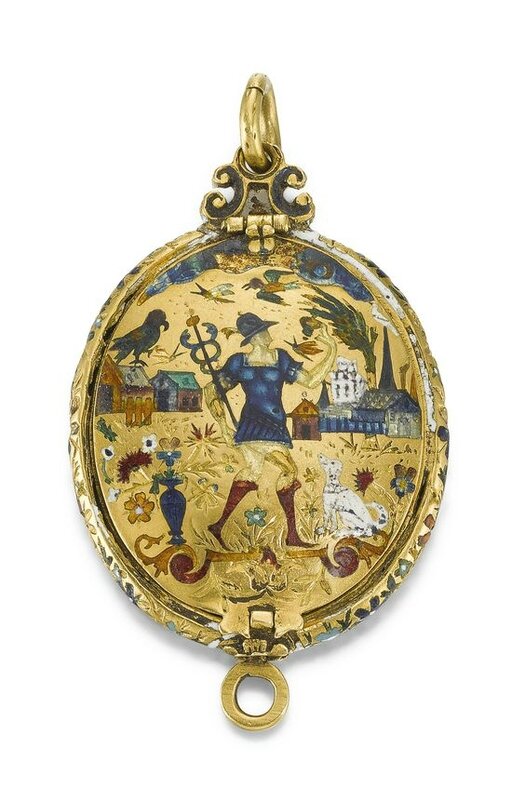 LONDON.- This week at Sotheby’s in London, fervent interest in the history of Scotland saw collectors out in force, eager to acquire items from two remarkable collections which each tell the story of an important family steeped in the nation’s past: the Forbeses of Pitsligo, tastemakers rooted in 18th-century Edinburgh, and the Marquesses of Lothian, an ancient and noble lineage. Over 1000 participants drove the sale total of Two Great Scottish Collections on 28 March to £3,799,077 ($4,768,981), over three times the pre-sale estimate (£1.2 – 1.76 million), with successful bids fielded from eight institutions.

The star of the sale was the Fettercairn Jewel – a 16th century virtuoso enamelled gold pendant set with an almandine garnet on the back – which was acquired by National Museums Scotland. This unique piece of Scottish history sparked a battle between bidders on the telephones and in the saleroom, driving the final price to £236,750, a figure far exceeding the pre-sale estimate of £30,000-50,000.

Harry Dalmeny, Sotheby’s UK Chairman, said: “These two collections provoked intense bidding throughout a marathon sale which lasted nine hours and saw a steady stream of auctioneers take to the rostrum. We’re thrilled to have been able to share with both collectors and public alike, through such rich content, as many revelations about the history of Scotland as about the families who assembled them over nearly four centuries.”

David Macdonald, Sotheby’s Specialist in charge of the sale, commented: “Though both collections recently made the journey from Scotland to London for the auction, it’s lovely to think that many of the items will make the journey back home again, especially the Fettercairn Jewel. The response from private collectors, not only Scottish but from all over the world, has been extraordinary, and the fact that a number of institutions were able to secure works was a fitting conclusion to what has been a unique celebration of all things Scottish.”

Property from Fettercairn House led the pair, with over 400 lots from 2000 years ago to the present day, followed by some 70 lots from the Stores and Attics at Monteviot House, the current seat of the Marquess of Lothian. Over the centuries, Fettercairn House in Kincardineshire became a depository for a trove of treasures passed down through generations of Forbeses, from the romance of Alexander, 4th Lord Forbes of Pitsligo, one of Scotland’s most heroic figures fêted for his participation in the Jacobite risings of 1715 and 1745, to his descendants, the extraordinary gentlemen Sir William Forbes, 6th Baronet (1739-1806) and his eldest son, Sir William Forbes, 7th Baronet (1773-1828), sons of the Scottish Enlightenment. The estate of Fettercairn was brought into the family’s possession when his son Sir William married Williamina Belsches, Sir Walter Scott’s great love. This was the moment when treasures from the magical houses in the Forbes name began converging on Fettercairn.

The emergence onto the market of the Fettercairn Jewel, discovered last year in the library at Fettercairn House, represents an important rediscovery for the history of Scottish Renaissance jewellery. The craftsmanship of this particular piece is at a level seldom seen in Renaissance jewellery, and the reverse panel is directly comparable to the celebrated Darnley or Lennox Jewel in the Royal Collection. 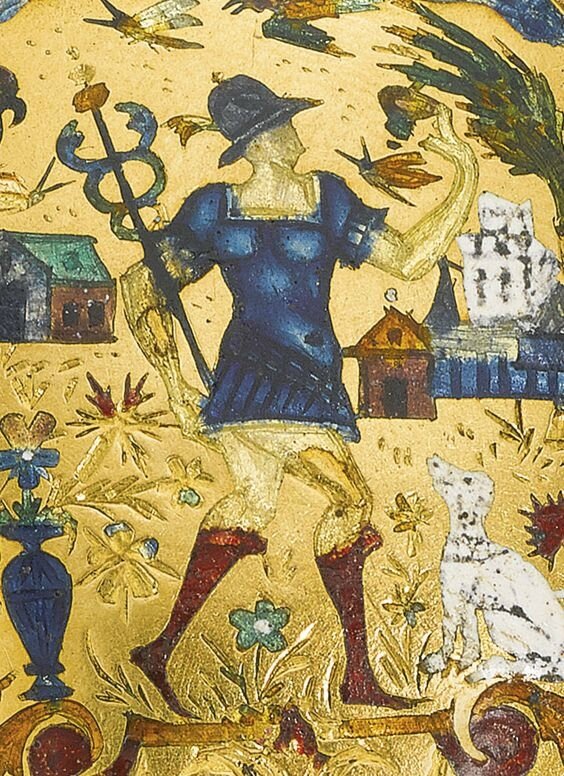 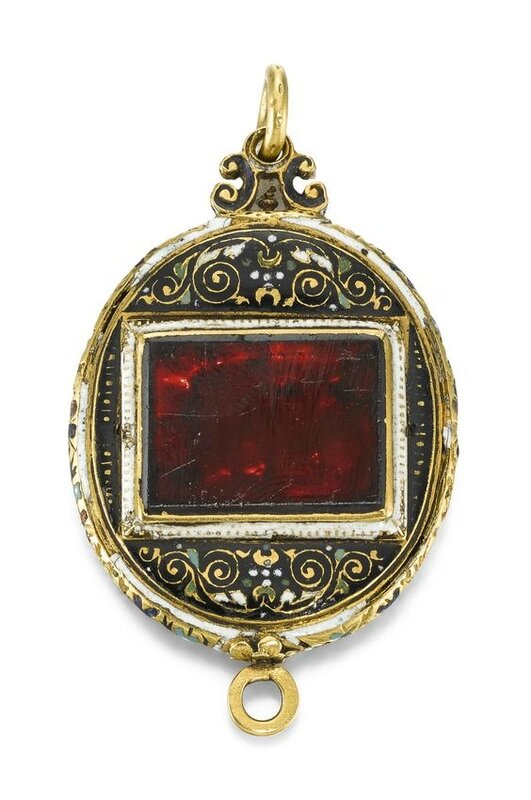 Note: The emergence onto the art market of this virtuoso enamelled gold pendant represents an important rediscovery for the history of Scottish Renaissance jewellery. The superb reverse panel, émail basse-taille, finds a direct comparison in the celebrated Darnley or Lennox Jewel in the Royal Collection (inv. no. RCIN 28181), which was recently described by Kirtsen Aschengreen Piacenti and John Boardman as being 'one of the most important early jewels in the Royal Collection' (op. cit., no. 280).

The closeness to the Darnley Jewel is such that the two should be ascribed to the same enameller. This argument is substantiated by a comparison between the lyrical figure of Mercury émail basse-taille on the reverse of the Fettercairn Jewel with the triumphant swordsman on the interior figurative plate of the Darnley Jewel. The graceful pose is near-identical, as is the costume, with azure blue cuirass, conical blue helmet with visors, and scarlet boots. The similarities extend to the arrangement of the enamelled scenes across the surface of the gold. Note the sheer proliferation of delicately executed enamelled motifs in a manner that is principally decorative, but lends itself to the iconographic and narrative significance of the scenes. Compare the red volutes forming the throne of the seated woman on the Darnley Jewel with the symmetrically arranged scrolls delimiting the lower edge of the scene on the present pendant. Note also the joy with which the enameller has represented different species of flowers in the Fettercairn Jewel, including daisies, and, of course, thistles. These are similarly conceived to the sunflower which flourishes from a coronet on the reverse of the Darnley Jewel. The opaque white enamel with black detailing of Mercury's obedient hound is very close to the skull and crossbones beneath the sapphire on the Darnley Jewel. Particularly similar is the manner in which the deep blue sky has been conceived with a wavy border, mimicking the scalloped edge of the starry night sky on the reverse of the Darnley pendant. Both jewels are adorned with exotic and fantastical birds, which dive and swoop in a magical sea of motion. Most charming, in the Fettercairn pendant, is the dragon fly which hovers in the space between Mercury's left arm and face, as if in conversation with the god. The identity of the maker of the Darnley Jewel is not known, though he surely must also have been responsible for the Fettercairn Jewel as well. Piacenti and Boardman note that jewellery of this quality was being crafted in Edinburgh and mention the names of three of the city's goldsmiths as potential candidates for the authorship of the Darnley Jewel: George Heriot, Michael Gilbert II and James Gray (op. cit., p. 185). Whilst it seems likely that the Darnley Jewel was made in Scotland, the scholarship remains open to the possibility that it could have been produced by an English or even French enameller. That said, however, the presence of two very similar jewels with Scottish provenances, strengthens the case for them both having been made by Scottish makers.

Pendants such as the Fettercairn Jewel would have been known as 'tablets' in the 16th-century. Whilst it is, in truth, difficult for the modern observer to decipher the iconographic meanings of the finest examples (which were frequently imbued with elaborate symbolism), the 16th-century noble would have easily understood individual resonances. The classical god Mercury, in the present pendant, represents commerce and good fortune - appropriate for a goldsmith (as he is sometimes represented with bullion), but also for a contemporary aristocrat. The jewel may have been conceived as a token for a beloved son or spouse, its symbolism willing good fortune on the recipient. It is likely that the birds and flowers allude to the identity of the family who commissioned the jewel. Most tantalising is the cityscape, which includes a prominent spire, reminiscent of the 15th-century steeple of Glasgow Cathedral.

The probable iconographic significance of the Fettercairn pendant is highlighted by the extensive theories surrounding the Darnley Jewel, which is rich in symbolism. Believed to have been commissioned by Margaret Stewart Lennox, Countess of Lennox, to celebrate the life of her husband, Matthew Steward Lennox, the Regent Lennox (d.1571), the jewel is emblazoned with their cipher beneath a jewelled crown. On the obverse are figures of Faith, Hope, Victory and Truth, enveloped by an inscription which reads 'Who hopes still constantly with patience shall obtain victory in their claim' (Modern English translation). The reverse is adorned with the Salamander from the crest of the house of Douglas, and the three fleur-de-lis on azure from the Lennox arms. Below, the reclining man is believed to represent their son, Lord Darnley (1545-1567), consort of Mary Queen of Scots and father of James VI of Scotland and I of England, who is represented by a sunflower emerging from a coronet, whose head faces the burning sun, symbolic of Queen Elisabeth I. To the interior the figures represent events in the lives of Lord and Lady Lennox, whilst comprising lessons for their grandson, King James.

The superb quality of the basse-taille enamelled detail on the Fettercairn Jewel, which extends to the outer foliate border of the pendant, and contrasts with the elegant, if more conventional, opaque black enamelling around the garnet, cannot be overstated. The use of the garnet in the jewel is also significant as it was believed to have medicinal and magical properties. The almandine garnet was thought to help with feelings of worry, panic, and fear, and to be beneficial to those involved in astronomy and astrology. For a hessonite garnet and peridot mounted pendant worn by Jane Seymour and now in the Kunsthistorisches Museum Vienna see D. Scarisbrick (op. cit. pp. 51-52). The craftsmanship of the Fettercairn jewel is at a level seldom seen in Renaissance jewellery and represents an unparalleled opportunity to acquire a unique piece of Scottish history.