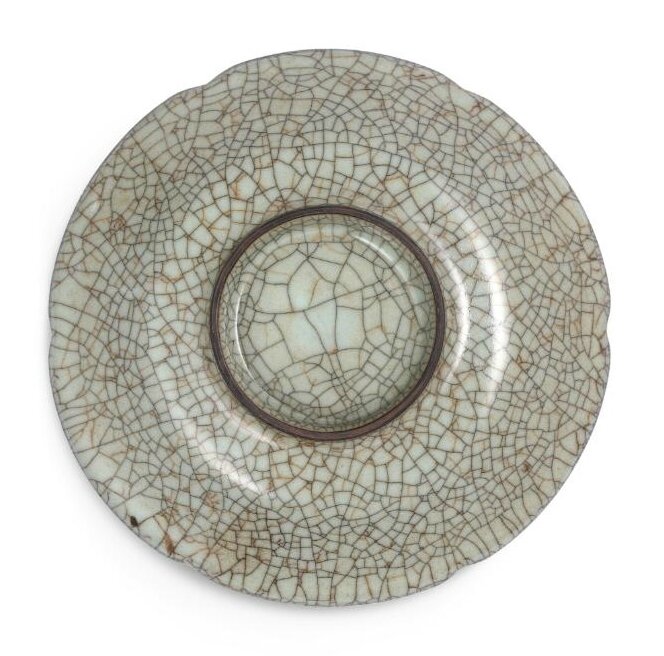 elegantly potted, the wide flaring sides rising from a countersunken base resting on a gently tapered foot, sweeping up to an everted rim gracefully divided into six lobes, the body unctuously enveloped in a thick lustrous bluish-celadon glaze thinning at the rim, the glaze suffused with a network of attractive golden-beige crackles, save for the neatly trimmed footring unglazed revealing the dark brown body

"Treasured throughout the World"

This noble dish belongs to one of the most celebrated and at the same time one of the most enigmatic ceramic wares of China’s history. Crackled guan (‘official’) wares of the Southern Song period (1127-1279), produced for the court right in the capital, Hangzhou in Zhejiang province, are among the most highly revered creations of China’s potters. The simplicity of forms, the satisfactory texture of the thick, tactile glazes and the endless variety of subtle shades and crackle patterns are appealing like a work of art created by nature and please the most sophisticated tastes.

In spite of the immense importance of these official ceramics for the history of Chinese ceramics, guan ware is still less well understood than most other ceramics of that period. Among the many reasons are the fact that every piece is unique, and contemporary wares can vary immensely; that this highly prized ware was avidly copied right from the start; and that examples to study are extremely rare and difficult to come by.

Unlike other ceramic wares of the period, including the famous Ru wares of the Northern Song (960-1127) that served as models, guan wares are marked by variation. Series production, as was common at all other important Song kiln centres that could create thousands of almost identical pieces, was not practised here, and no two pieces of guan ware are alike. While most other Song kiln centres had been active at least since the Tang dynasty (618-907) and had refined their materials and perfected their technology over a long period of time, the guan kilns were set up by decree, to replace lost access to northern ceramics, when the court fled to south China and relocated in Hangzhou in 1127. The potters at the newly established manufactories were probably a combination of northerners, who had moved south together with the imperial house and now had to come to terms with southern materials, and locals, who had to adapt their materials and traditional skills to recreate a northern ware. The need to experiment probably explains both the vast variety and the outstanding successes achieved by the new kilns.

The superb ceramics created in Hangzhou immediately found echoes elsewhere. In the capital itself, at least two kiln centres making these crackled wares have been discovered, and yet another kiln or kilns not yet identified may well have existed (a possibility evoked also by Ts’ai He-pi at the Southern Song guan ware conference, Nan Song guanyao wenji/A Collection of Essays on Southern Song Dynasty Guan Kiln, Beijing, 2004, pp. 1-13). We cannot say for certain whether both kilns examined so far were official kilns working directly for the court, or only one, or, for that matter, neither of them.

Similar wares continued to be made by at least one of the two kilns, Laohudong, during the Yuan dynasty (1279-1368). These Yuan wares are by some scholars categorised as ge wares rather than guan, ge being another historically documented name for important crackle-glazed wares. Other scholars distinguish ge from guan by a more milky-beige or -grey glaze colour and crazing lines in two different tones – a difference that may, however, simply be due to the specific conditions in the kiln. According to Nigel Wood: “It seems likely that both ‘Ge-like’ and ‘Guan-like’ wares could have issued simultaneously from the same kilns – simply showing the natural variations of atmosphere, temperature and cooling that dragon kilns often provide” (Chinese Glazes. Their Origins, Chemistry and Recreation, London, 1999, p. 87). The term ge can therefore not yet be used with confidence for any kind of ware.

Other wares copying and often mixed up with guan wares, but easier to distinguish, are Longquan and Jingdezhen wares. Some very fine examples were made by the celadon kilns of Longquan further south in Zhejiang province, both during and after the Southern Song, but they tend to differ in shape and body material. And since the Ming dynasty (1368-1644) but mainly under Tang Ying as supervisor of the imperial kilns during the Yongzheng (1723-35) and Qianlong (1736-95) periods of the Qing dynasty (1644-1911), deliberate copies of guan ware were made at Jingdezhen in Jiangxi province. The latter can be exquisite and valuable in their own right, but the potters there were used to working with white porcelain and with higher firing temperatures, and were aiming for perfect, impersonal porcelains that belie as much as possible human involvement in their production. Not surprisingly, they had to struggle to recreate the much warmer and more individual creations of the early periods, where the skilful hand of the master craftsman could still be detected and the outcome of the firing was more variable.

The difficulty to understand guan wares is compounded by the fact that genuine pieces are exceedingly rare, mostly preserved in the National Palace Museum, Taipei, where larger numbers, however, are only occasionally on display, and views about attribution still differ. The first major exhibition of guan ware from the Museum took place in Taipei in 1989, with a catalogue by Ts’ai Ho-pi (Song Guan yao tezhan/Catalogue of the Special Exhibition of Sung Dynasty Kuan Ware, National Palace Museum, Taipei, 1989), where all pieces retained their traditional attribution to the Song dynasty, although in the introductory essay a re-dating of many pieces was proposed and stylistic and technical differences were pointed out.

This catalogue includes twenty dishes of comparable mallow shape, differing between each other in glaze, size, proportion and firing method, some having been supported on spurs in the kiln, some on their foot, like the present dish (Ts’ai 1989, cat. nos 98-102, 118-131 and 134). The first five were confirmed by Ts’ai as dating from the Song dynasty. A Yuan date was suggested for five others, where the glaze at the rim is so thin, that the dark body clearly shows through, or on account of similarities with pieces believed to date from the Yuan dynasty, excavated from a tomb of 1371 (Ts’ai 1989, cat. nos 118-121, p. 32). The rest was not expressly re-attributed. 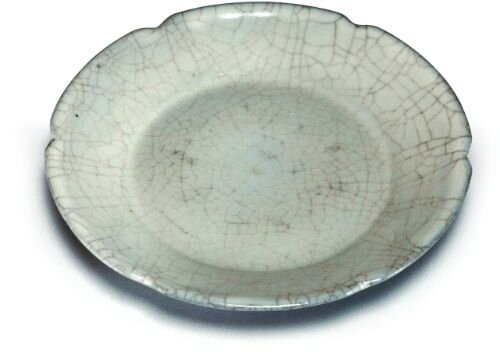 These thirty guan dishes in the National Palace Museum impressively document the wide scope of these wares. With its classic Southern Song mallow form, dark brown body and greenish-grey glaze with a distinct dark grey crackle, the present dish neatly fits into this group of dishes in the National Palace Museum, Taipei, as well as into a smaller group of six dishes in the Palace Museum, Beijing, attributed to the Song dynasty, but classified as ge ware (The Complete Collection of Treasures of the Palace Museum: Porcelain of the Song Dynasty, Beijing, 1996, vol. 2, pls 74, 78, 82, 84, 85, 91). Ts’ai sums up the main problem herself, when she writes “The works of the late Southern Sung and Yüan dynasty are especially difficult to distinguish, since the fluctuations which occurred at the kilns over the 150 or so years of the Southern Sung in accord with the changing times are impossible to know with any certainty” (Ts’ai 1989, p. 36).

Particularly noticeable is the fact that dishes in both collections share a distinct feature of the crackle pattern with the present dish, namely a more wide-meshed medallion in the centre, corresponding to the area of the base underneath. On the present dish, the base is distinctly recessed, the body there being reduced to a thinner layer than elsewhere. Without handling, this peculiarity of the potting can of course not be verified on the companion dishes from the Qing court collection, but it is likely that on all pieces this feature of the crackle pattern similarly results from a difference in body thickness (compare Ts’ai 1989, cat. no. 127; Yu 2012, pls 40 and 42; Yu 2016, p. 287 right; The Complete Collection, op.cit., pls 78, 82 and 85).

Dishes of similar shape have also been discovered at the site of the Zhanggongxiang kilns of Ruzhou in Henan province, which are either interpreted as the Northern Song guan kilns and as such would be predecessors of their Southern Song counterparts, or as kilns producing for the Jin court (1115-1234), i.e. their contemporaries. Three reconstructed examples were included in the exhibition Henan xinchu Song Jin mingyao ciqi tezhan [Special exhibition of porcelains recently excavated from famous Song and Jin kilns in Henan], Poly Art Museum, Beijing, 2009, catalogue pp. 87 and 100-102, all attributed to the late Northern Song to early Yuan period, late 11th to 13th century.

Nothing similar seems to have been published so far from the main Southern Song guan kiln site, Laohudong in Hangzhou which, however, has not yet brought to light any of the finest guan ware types; see Du Zhengxian, ed., Hangzhou Laohudong yaozhi ciqi jingxuan [Selection of porcelains from the Laohudong kiln sites in Hangzhou], Beijing, 2002.

The present dish comes from the fabled collection of Stephen Junkunc III, which included outstanding pieces of Song Ru as well as guan ware.