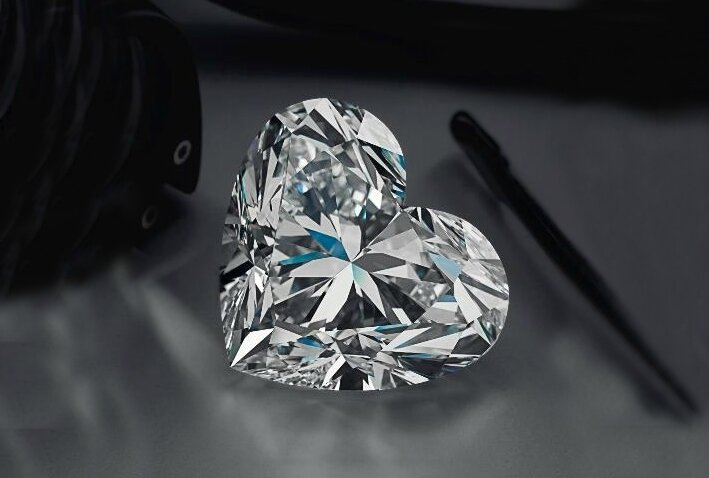 GENEVA.- Christie’s upcoming auction of Magnificent Jewels will take place on 17 May at the Four Seasons Hotel des Bergues, where approximately 250 exceptional jewels await collectors from around the globe. Ahead of the auction, highlights will tour to London from 10-12 April. The jewels will be exhibited for a long stretch in New York, from 21-25 April and from 5-8 May alongside the 20th Century Art preview, before they return to Geneva.

The highlights on view will include a fantastic 92 carat D Flawless heart shaped diamond pendant, signed by Boehmer et Bassenge. The Maison de Haute Joaillerie was launched last year and named in honour of Charles Boehmer and Paul Bassenge, Parisian jewelers of the 18th century.

Working exclusively with a handful of large, D colour, Flawless clarity diamonds of perfect polish and symmetry, combined with years of experience and preparation, the Maison Boehmer et Bassenge creates exceptional pieces of jewellery in honour of the craftsmanship of their eponym. With an uncompromising attitude to quality, just a few pieces are produced each year. Having sold the first unique jewels over the course of 2016, Christie’s is pleased to present two further pieces this spring in Geneva.

La Légende is a mesmerizing diamond and cultured pearl necklace containing a 92.15 carat heart shaped, D colour, Flawless diamond. Composed into a cultured pearl sautoir, it is a necklace of pure quality and magnitude, estimated at US$14-20 million. It is the largest D Flawless heart shaped diamond ever to be offered at auction. La Vie Bohème is a pair of chandelier earrings, each with an asymmetrical pink diamond bow, a pear-shaped diamond connecting link, each suspending a marquise-cut diamond weighing approximately 10.07 and 10.05 carats. Each drop is a D colour, Flawless clarity diamond, with perfectly symmetrical cuts. Such perfection is rarely seen and the estimate for this pair of earrings is US$ 2-3 million. Until the middle of the 19th century, only the Sovereign of Burma or an individual deemed worthy by him would have been allowed the privilege of possessing such a magnificent gemstone, as the 15.03 carat oval-cut ruby on offer this May. Although rubies can be found in various countries, it is the legendary mines of Burma which have yielded the most beautiful gems over the centuries. Brought to the attention of the Europeans at the beginning of the fifteenth century, Burmese rubies have not been surpassed in quality by any other origin. Historically they have been mined in the Mogok Valley in the northern part of Burma which is only two miles long and a half a mile wide. One of the main reasons is due to the high chromium content in the ground which accounts for the very specific color, an extremely saturated red often referred to as pigeon’s blood. Another factor is their natural fluorescence which has the effect of making the stone “come alive” and appear internally illuminated. Whereas emeralds, sapphires, and diamonds regularly appear on the market in important sizes, large rubies of Burmese origin are exceedingly rare. To find a 15.03 carat unheated stone with a pigeon blood colour and so few inclusions is the dream of every gemstone connoisseur. 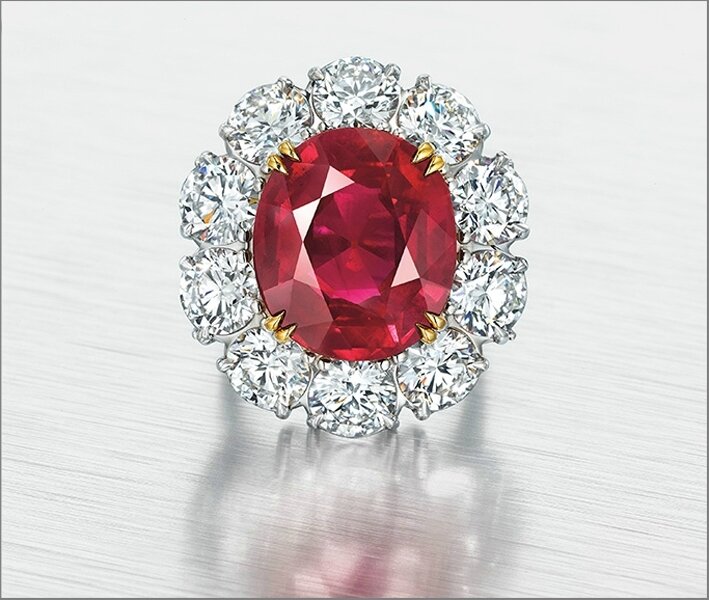 Sapphires have always held great significance to the connoisseur of fine gems. The origin Kashmir in reference to sapphires has only one meaning: the most magnificent blue colour and the most sought after and valuable of all the shade and tones in which the stone is found. Kashmir sapphires command a much higher price premium than all other sapphires, not only for their rarity, especially those above 10 carats, but also for their rich velvety blue colour. Unlike most others, Kashmir sapphires can maintain their coveted pure blue hue even as it changes from natural daylight to artificial incandescent light, as they contain little or no chromium. The present Kashmir weighing 14.88 carats is characterised by an attractive blue colour and an excellent purity, a combination rarely encountered in sapphires from Kashmir of this size (estimate: US$1.0-1.5 million). The early 20th century was the golden age of young and rich debutantes with names that still resonate today: Consuelo Vanderbilt, Barbara Hutton and, of course, Doris Duke. Doris Duke was most passionate about charity. At age just 21, she created Independent Aid, later to become the Doris Duke Charitable Foundation. It is today one of the largest national foundations ever created by a woman.

In June 2004 Christie’s was proud to offer for sale “The Doris Duke Collection”, sold to benefit The Doris Duke Charitable Foundation. It totalled just under US$12 million and was at the time the highest sale total for any private jewellery collection sold at auction in America.

The ‘Diamond and platinum necklace mounting, by Cartier’ was originally purchased at Cartier New York on April 30, 1937 for $65,000. Only the mounting was auctioned in 2004 as Doris Duke had all of the larger diamonds in this important necklace unmounted. Over the years, she set and re-set the stones in many other pieces of jewellery, following trends and exploring avant-garde jewellery designs. Interestingly, just the mounting achieved almost as much at auction as the original purchase price of the necklace in 1937. The buyer subsequently spent years painstakingly replacing all of the missing stones with age appropriate diamonds, restoring the necklace to its former glory which will be offered at auction with a pre-sale estimate of US$ 3-5 million. Another highlight is the property of an elegant Lady, an impressive diamond necklace by Chopard, suspending a pear-shaped diamond weighing approximately 56.03 carats, and offered with an estimate of US$5-7 million.

Diamonds in all colours, such as a Fancy Deep Blue square-cut diamond weighing approximately 4.05 carats (estimate: US$4.2-5.2 million) or the 7.97 carats Fancy Intense Blue cushion-shaped diamond, carrying an estimate of US$2.5-3.0 and signed jewellery from the most famous houses, including Boucheron, Cartier, Harry Winston and JAR will be all be part of the Magnificent Jewels sale on 17 May, in Geneva. 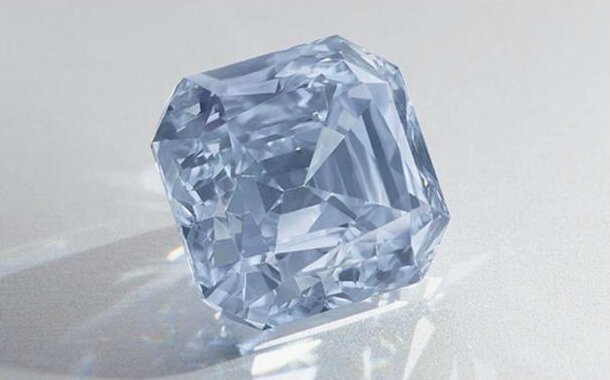 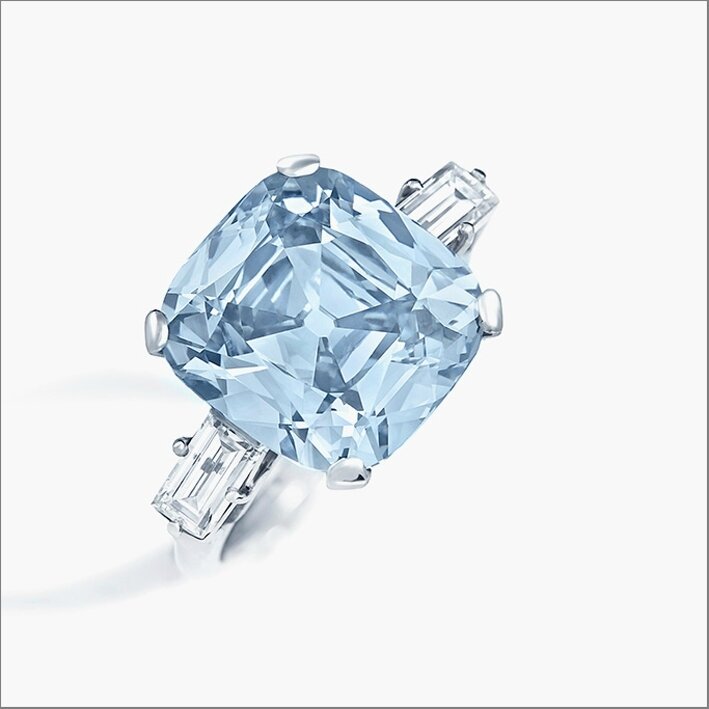 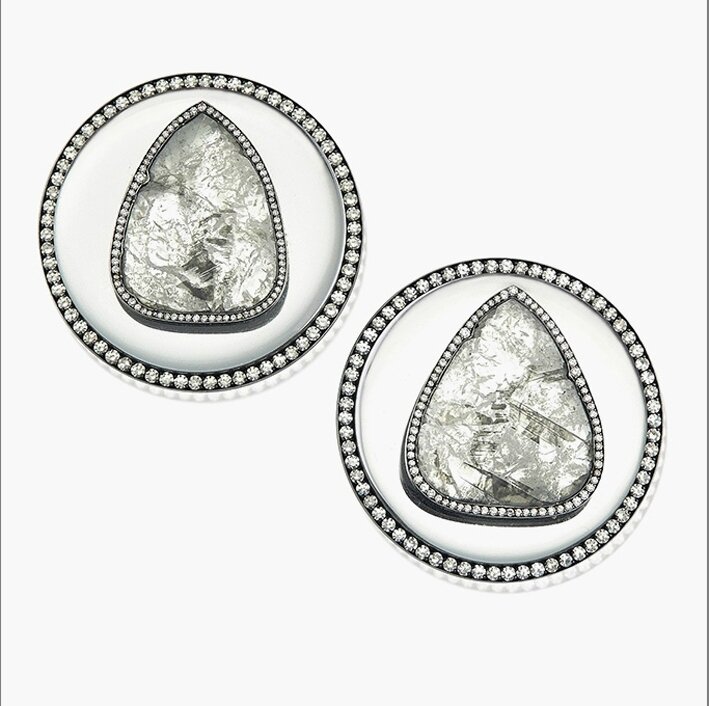