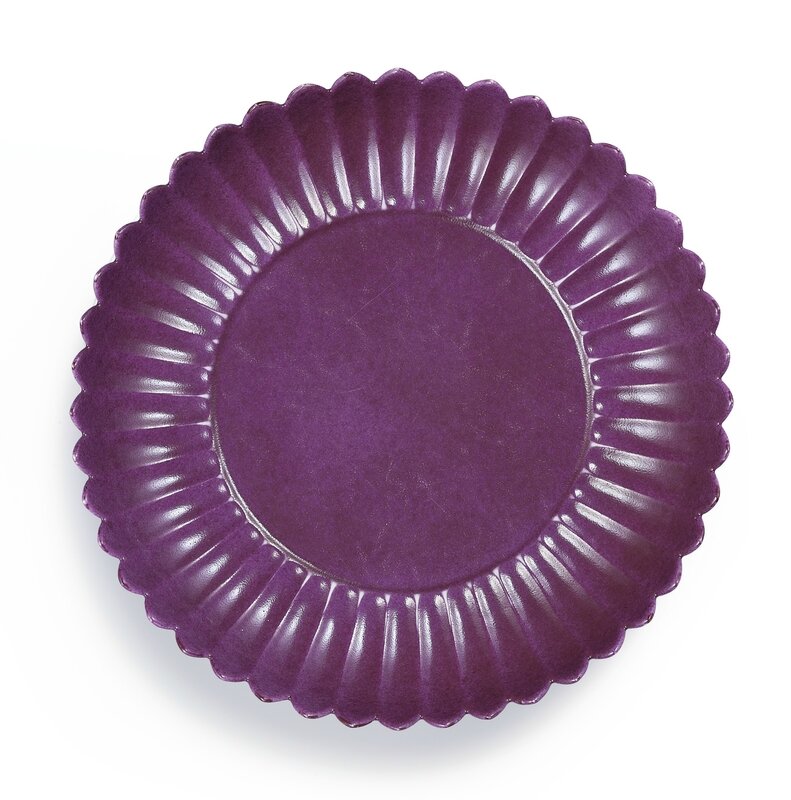 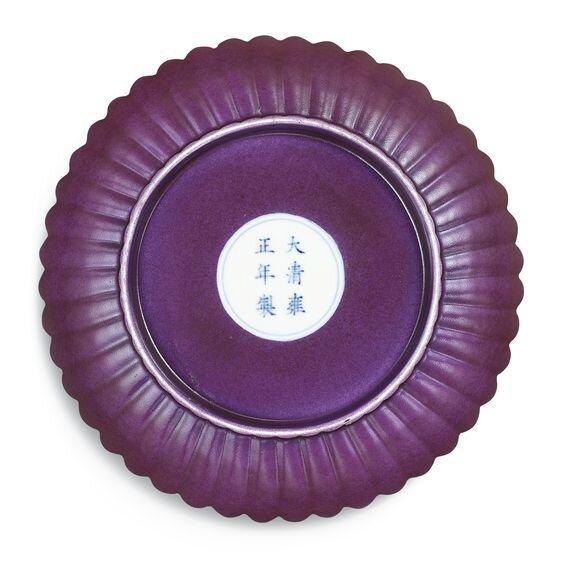 the delicate shallow rounded sides exquisitely moulded in the form of slender fluted petals with pointed tips radiating from a slightly recessed flat centre simulating a chrysanthemum bloom, all supported on a foot of corresponding form, covered overall save for the footring and the centre of the base with a rich reddish-purple enamel, the white centre of the base inscribed with an underglaze-blue six-character reign mark within a double circle; 17.5 cm, 6 7/8  in.

Note: This chrysanthemum dish is rare for its rich purple enamel and only one other closely related piece appears to have been published, in the Palace Museum, Beijing, included in the exhibition China. The Three Emperors 1662-1795, Royal Academy of Arts, 2005, cat. no. 172 (second row, left), probably the dish also illustrated in The Complete Collection of Treasures of the Palace Museum. Monochrome Porcelain, Hong Kong, 1999, pl. 257 (centre, second from left). Another purple dish of somewhat darker tone, with the enamel similarly covering part of the base, from the Carl Kempe and Meiyintang collections, illustrated in Regina Krahl, Chinese Ceramics from the Meiyintang Collection, vol. 4, London, 2010, pl. 1830, was sold in these rooms, 8th April 2013, lot 4.

The Yongzheng Emperor is recorded to have commissioned Nian Xiyao, Supervisor of the imperial kilns at Jingdezhen, to produce chrysanthemum dishes in twelve colours, forty pieces of each. The commission is dated the 27th day of the 12th month of the 11th year of the Yongzheng reign, corresponding to 1733. However, no original complete set of twelve dishes is preserved and chrysanthemum dishes of the Yongzheng period are known in many more than twelve colours. The Palace Museum, Beijing, has indeed published dishes covered in thirteen different tones, which have been assembled from different sources, and at least six further colours are recorded elsewhere. Hajni Elias in ‘In the path of Tao Qian: “Chrysanthemum” wares of the Yongzheng emperor’, Arts of Asia, May-June 2015, pp. 72-85, discusses the development of chrysanthemum-shaped porcelain wares in the Yongzheng period and suggests that they may reveal the Emperor’s admiration for one of China’s most famous poets, Tao Qian (365-427). A scholar-official who retired to his homeland in Chaisang, present-day Jiujiang in Jiangxi province, he is known for is pastoral lifestyle and for having created the so-called ‘farmstead poetry’ (tianyuan shi) which was inspired by his chrysanthemum garden as well as the natural landscape and pastoral scenes. These themes were particularly relevant to the Yongzheng Emperor, who was an advocate of farming and manual labour.