A rare pair of lemon-yellow-enamelled saucers, Marks and period of Yongzheng (1723-1735)

A rare pair of lemon-yellow-enamelled saucers, Marks and period of Yongzheng (1723-1735) 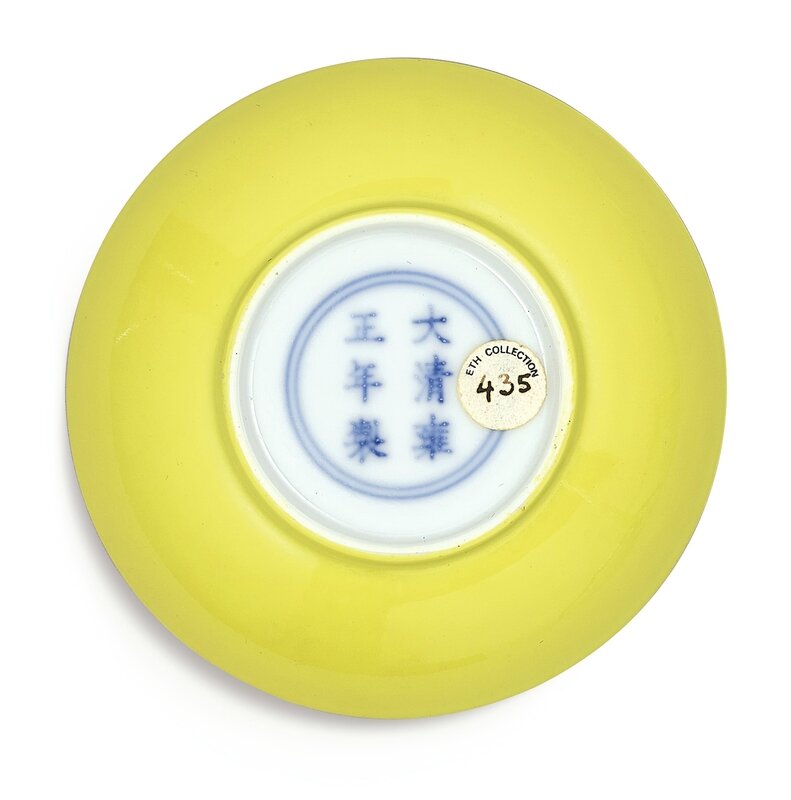 the delicate shallow rounded sides exquisitely moulded in the form of slender fluted petals with pointed tips radiating from a slightly each delicately potted with shallow rounded sides and a recessed centre to the interior resting on a short slightly tapered foot, evenly covered overall save for the base with a vibrant lemon-yellow enamel, the white base inscribed in underglaze blue with a six-character reign mark within a double circle; 7.8 cm, 3 in.

Note: In their elegant simplicity and association with antiquity, this pair of dishes is characteristic of porcelains made during the Yongzheng period. Yellow was highly favoured by the court due to its direct imperial association. Although imperial yellow-glazed wares had been produced from the early Ming dynasty, they were used exclusively for ritual ceremonies: thus the lemon-yellow colour provided the court with an alternative for daily use.

Monochrome porcelain wares, particularly those of lighter hue, were one of the most challenging types to produce as the smallest imperfection in the clay, potting, firing or glazing resulted in the piece being destroyed. The bright yellow colour of these dishes, derived from lead antimonate, perfectly complements the unassuming curved form.

Similar saucers include two from the Sir Percival David Foundation, now on loan to the British Museum, London, published in Illustrated Catalogue of Ming and Qing Monochrome Wares in the Percival David Foundation of Chinese Art, London, 1989, nos B 543-4; a pair included in John Ayers, The Baur Collection, Geneva, Chinese Ceramics, vol. 3, Geneva, 1972, pls A489-492; another from the Goldschmidt Collection and later in the Tsui Museum of Art, Hong Kong, sold in these rooms, 13th November 1990, lot 67, and again at Christie’s Hong Kong, 3rd November 1996, lot 559; and a further pair, from the Meiyintang Collection, illustrated in Regina Krahl, Chinese Ceramics from the Meiyintang Collection, vol. 2, London, 1994, pl. 909, and sold in these rooms, 1st April 2011, lot 27.

Commentaires sur A rare pair of lemon-yellow-enamelled saucers, Marks and period of Yongzheng (1723-1735)