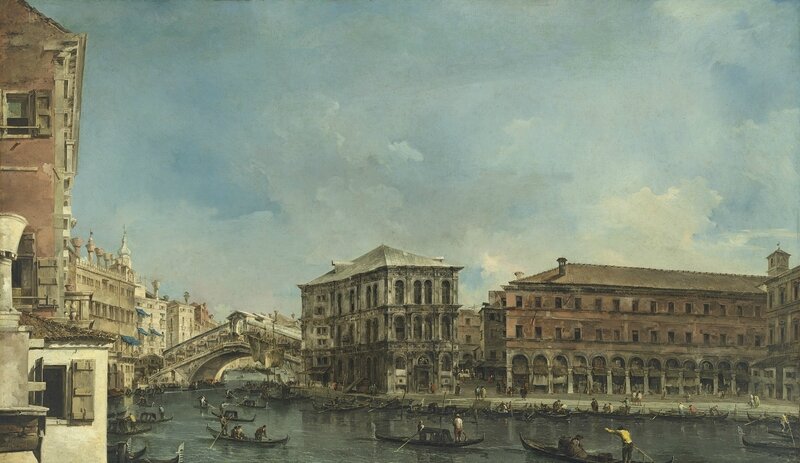 LONDON.- Christie’s Old Masters Evening Sale, 6 July 2017, will be led by Francesco Guardi’s masterpiece The Rialto Bridge with the Palazzo dei Camerlenghi (estimate on request), which is expected to fetch more than £25 million. This magnificent picture is one of the celebrated pair of views of the Grand Canal at the Rialto, which are widely regarded as the most accomplished works of Guardi’s early maturity. Ambitious in scale and startlingly innovative both in design and pictorial mood, this work stands among the masterpieces of eighteenth-century European art. The picture is prominently signed and exceptionally well preserved, having been offered for sale only once in its history. The work will be exhibited during Christie’s New York Classic Week (22-26 April), in Venice (8-15 May) and in Hong Kong (26-29 May), before returning to London where it will highlight London Classic Week (1-13 July).

Henry Pettifer, Head of Christie’s Old Master Paintings EMERI: “This majestic view of Venice is one of the great masterpieces of eighteenth-century view painting. Painted in the mid-1760s, at the height of the artist’s career, this is a monumental tour de force displaying the full range of Guardi’s technical virtuosity and his unique ability to capture the atmosphere and sensuous experience of being in Venice. After the record-breaking Old Master sales at Christie’s in 2016, with the Rubens Lot and his Daughters and the pair of Rembrandt portraits sold by private treaty, we are confident this great Guardi will arouse enormous interest from global collectors of masterpieces, from Old Masters to Contemporary, this July.”

Taking its vantage point from what is today the view from the Palazzo Sernagiotto, Guardi illustrates iconic landmarks of the Venetian landscape including the Palazzo Civran, the Fondaco dei Tedeschi, long famous for its murals by Giorgione and Titian, the Palazzo dei Camerlenghi, the Fruit Market and the supremely elegant Rialto Bridge itself, built in 1588–91 to the design of Antonio da Ponte. This was the spectacular scene that would have greeted tourists in the eighteenth century as they entered Venice from the south. Through his flickering delicacy of touch and masterful suffusing of colour, Guardi creates an expression of atmosphere like no other view painter of his time.

The painting has a remarkable provenance having been offered for sale only once before. It was acquired in 1768 by Chaloner Arcedeckne (circa 1743–1804) during his Grand Tour and remained in the family until 1891. It was then sold privately via Christie’s, along with its pendant, for £3,850, to the great collector Sir Edward Cecil Guinness, 1st Bt., later 1st Lord, and 1st Earl of Iveagh (1847–1927), in whose family it has since remained.

The painting also has a rich exhibition history and featured most recently at the Canaletto and his Rivals exhibition at the National Gallery, London, and the National Gallery of Art, Washington in 2010-11. Guardi’s impressionistic views of Venice, bathed in atmospheric luminosity, anticipate the work of many of the most important painters of the nineteenth and twentieth centuries who worked in the city such as Joseph Mallord William Turner and Claude Monet.