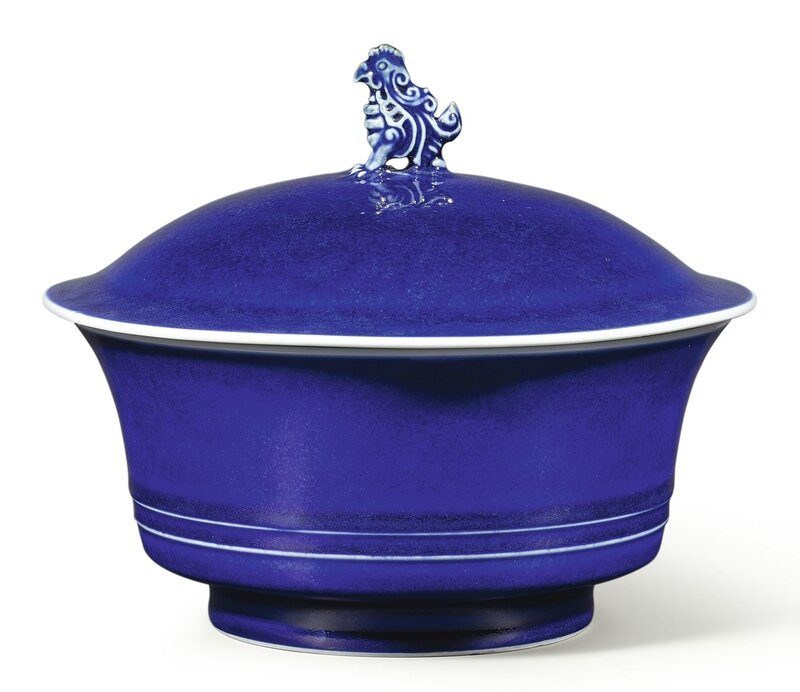 well potted with deep sides rising from a short foot to a flared rim, moulded with two raised bowstrings above the foot, the domed cover surmounted by a finial intricately modelled in the form of a mythical sharp-beaked bird with outstretched talons and curled tail, the exterior covered with a brilliant powder-blue glaze suffused with subtle snowflake-white patches, the interior of the bowl and cover left white and inscribed with an underglaze-blue three-column six-character reign mark, the former within a double circle

Note: This bowl and cover is an exceptional example of the technical perfection achieved by craftsmen working at the imperial kilns at Jingdezhen during the Yongzheng period. As with many Yongzheng period monochrome wares, this piece displays the prevailing interest in archaism, as evidenced in its shape, a reinterpretation of the celebrated wares of the Xuande reign, and the bird-shaped finial on the cover, which echoes the Chinese bronze age. For the prototype of this piece, see four blue and white bowls with Xuande marks and of the period, in the National Palace Museum, Taipei, included in the Museum’s Special Exhibition of Selected Hsuan-te Imperial Porcelains of the Ming Dynasty, National Palace Museum, Taipei, 1998, cat. nos 50-53.

Bowls of similar form are also known decorated in white slip with fish against a blue ground, such as a Yongzheng mark and period example, with its matching cover, in the Honolulu Academy of Arts, illustrated in Sekai toji zenshu/Catalogue of World’s Ceramics, vol. 12, Tokyo, 1956, pl. 56; another in the collections of George de Menasce, Pierre de Menasce and F. Gordon Morrill, sold in these rooms, 20th May 1987, lot 586; and a third, sold in our London rooms, 9th November 2005, lot 309.

See also a Yongzheng mark and period bowl of this shape, but covered overall in a yellow glaze and incised on the sides with dragons, included in the Oriental Ceramic Society Jubilee exhibition The Ceramic Art of China, London, 1971, cat. no. 244, and sold at Christie’s London, 15th July, 1981, lot 44.

Commentaires sur A fine blue-glazed bowl and cover, Marks and period of Yongzheng (1723-1735)