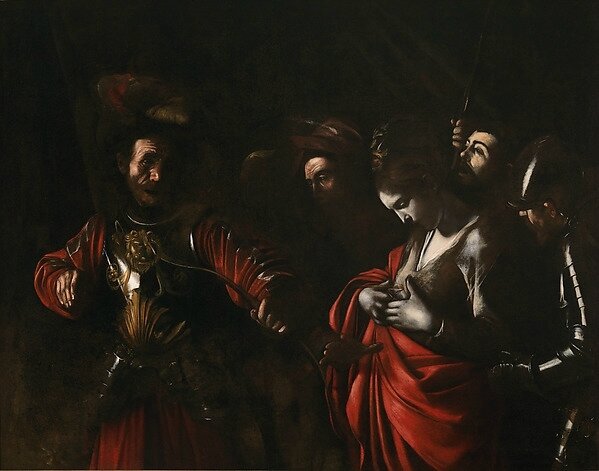 NEW YORK, NY.- The Martyrdom of Saint Ursula, Caravaggio's (1571–1610) last painting, is on exceptional loan from the Banca Intesa Sanpaolo in Naples and presented with The Met's The Denial of Saint Peter, also created by the artist in the last months of his life. Commissioned by the Genoese patrician Marcantonio Doria two months before the artist's death in July 1610, Caravaggio painted The Martyrdom of Saint Ursula in an unprecedented minimalist style; its interpretation of the tragic event that is its subject, combined with the abbreviated manner of painting, has only one parallel: The Denial of Saint Peter.

These two extraordinary paintings have not been reunited since a 2004 exhibition in London and Naples devoted to Caravaggio's late work. Since then, there has been a great deal of information discovered about Caravaggio's last years. This exhibition offers a rare opportunity to see these two pictures side by side and to examine the novelty of Caravaggio's late style, in which the emphasis is less on the naturalistic depiction of the figures than on their psychological presence. In these two works, Caravaggio poignantly probes a dark world burdened by guilt and doom, suggesting to some scholars an intersection with his biography and his sense of the tragedy of life.

The Martyrdom of Saint Ursula
According to legend, Saint Ursula traveled with eleven thousand virgins to Cologne, where the chief of the Huns besieging the city fell in love with her. When she rejected his advances, he killed her with an arrow. In this haunting depiction, Caravaggio places the two figures improbably close to each other, maximizing the contrast between their expressions: Ursula’s perplexed gaze at the agent of her martyrdom; the tyrant’s conflicted reactions of rage and guilt. Caravaggio includes himself as a spectator, straining for a glimpse, while another figure thrusts his hand forward in an abortive effort to prevent the saint’s execution. The exaggerated contrasts between dark and light seem not merely a dramatic device but a symbolic allusion to sin and redemption, death and life.

The Denial of Saint Peter
Standing before a fireplace, the apostle Peter is accused of being a follower of Jesus. The pointing finger of the soldier and the two fingers of the woman allude to the three accusations recounted in the Bible as well as to Peter's three denials. The composition is reduced to essentials. Just as in The Martyrdom of Saint Ursula the Hun chief wears a piece of near-contemporary armor, so in The Denial of Saint Peter the soldier's helmet is taken from a precise model of the early sixteenth century, thus breaking down the fiction of an imagined past. Note the similar gestures of Ursula and Peter.