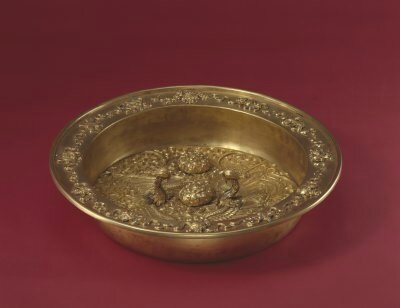 Item used in the Qing court The basin is made of metal alloy which is eighty percent pure gold. The artists hammered and embossed twelve auspicious patterns along the rim, which include a pair of rhinoceros horns, auspicious vases, silver ingots, pomegranates, auspicious clouds, pearls, wheels of Dharma, double coins, double scrolls, canopies, pestles, and fish. The interior of the bottom is hammered into two phoenixes raising their heads among three stylized lotus.

The Collective Rituals of the Great Qing Dynasty (Daqing huidian) has a description of a ritual basin displayed in the honor guard of the Empress or the Empress Dowager as follows: The ritual basin is made of cast gold and takes a round form. The rim has twelve facets. The body measures three cun and nine fen [about 13 centimeters]. The mouth diameter is one chi two cun and nine fen [about 10 centimeters], its rim is carved with patterns of the Eight Treasures [wish-granting pearl, double lozenges, stone chime, pair of rhinoceros horns, double coins, ingot, coral, and ruyi scepter]. The bottom diameter is one chi and one cun [about 36 centimeters]. The center of the basin is set with two phoenixes raiding their heads.

Because the form and patterns of this ritual basin do not agree with the above description, it was not made in the Qianlong reign. Close inspection reveals that it was originally a plain basin cast in the Ming dynasty. In the Shunzhi reign (1644-1661) of the Qing dynasty, it was inlaid with two phoenixes and auspicious patterns, and displayed in the honor guard of the Empress or the Empress Dowager. The basin made in one dynasty and decorated in another is a rarity in the imperial collection, revealing that the early Qing dynasty imperial honor guard was lacking certain ritual paraphernalia.