Exhibition at Tornabuoni Art London goes behind the scenes’ of paintings

Exhibition at Tornabuoni Art London goes behind the scenes’ of paintings LONDON.- ‘Recto/Verso: Behind the Italian Monochrome’ at Tornabuoni Art London invites viewers to literally ‘go behind the scenes’ of paintings by Lucio Fontana, Paolo Scheggi, Agostino Bonalumi and Turi Simeti, for the first time ever. Because Tornabuoni is not only a gallery but also owns an important collection of Italian Post-War art, they are able to offer visitors an experience that has until now been reserved for museum curators and top collectors – that of seeing the verso (back) of the artworks, one for each of four artists among those who best represent the Milanese avant-garde that emerged in Italy in the 1950s and 1960s. These four paintings have been suspended from the ceiling above plinths so that viewers can walk around them. They are accompanied by over 20 works by the same artists, hung classically on the wall, so viewers also have the opportunity to see the works as they were meant to be exhibited.

Several recent exhibitions have revealed the verso of old master paintings, including the National Gallery’s current ‘Michelangelo/Sebastiano’ and the Mauritshuis’s ‘Vik Muniz: Verso’ in 2016. The Tornabuoni show is the first ever of its kind to focus on Fontana and his generation. This is particularly relevant, because – unbeknownst to most people – the back of these canvases contains the essential proof needed to guarantee the artwork’s originality and reveals how it was made. This information is jealously guarded by the owners of the works and the foundations representing the artists’ estates. Indeed, photographing the verso of these works is strictly forbidden – an image of the back of a Fontana painting has never been published.

The back of works by Lucio Fontana and other artists engaging with his Spatialist concepts, such as Paolo Scheggi, Agostino Bonalumi and Turi Simeti, however, is, in fact, more significant than the back of most paintings. Indeed at the core of Spatialist ideas, which Fontana theorised for the first time in the Manifiesto Blanco, 1946, lies a desire to open up the space behind the canvas in order to liberate the infinite dimensional possibilities that lie beyond it:

“We are abandoning the use of known forms of art and we are initiating the development of an art based on the unity of time and space” – Lucio Fontana, Manifiesto Blanco, 1946

For Lucio Fontana (1899-1968), this means perforating the canvas in a performative gesture and making holes or slashes (sometimes from behind the canvas). However, few know that these gashes are held in place by a black mesh, ensuring the structural integrity of the work while creating a sense of depth. In Fontana’s monochromatic works, the uniformly painted canvas becomes an embodiment of colour, which, through its perforation, is made to enter three-dimensional space rather than existing on a single plane. This conceptual approach, repeated time and again throughout Fontana’s prolific career, is counterbalanced by the highly personal sentences handwritten by the artist on the back of his canvases. From “In questo momento chiamano per telefono” (the phone is ringing just now) to “Oggi è la prima giornata di sole” (today is the first day of sunshine), unseen diary-like statements give a uniquely intimate dimension to Fontana’s slashes. 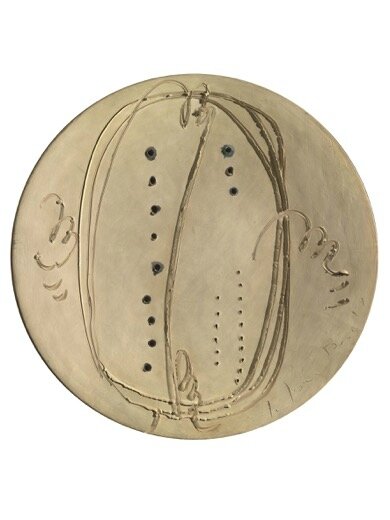 Paolo Scheggi (1940-1971), of whom Fontana himself wrote in 1962 “I love your questioning, your research and your paintings, so black, so red, so white – they show your thoughts, your fears,” also opened up the pictorial surface, creating voids within the canvases which he overlaid to create volumes and shapes through the shadow of one canvas upon the next. Scheggi’s Intersuperficie tread the line between painting and sculpture. They can be described as art objects rather than paintings, as viewers can experience for themselves by walking around his Intersuperficie curva Bianca from 1967.

Agostino Bonalumi (1935-2013) and Turi Simeti (b.1929) take the sculptural realisation of the artwork even further, working from behind the canvas rather than in front of it. Both artists create undulations on the surface of the canvas by shaping it from behind with a wooden structure. Like Scheggi, Bonalumi and Simeti create a play of light and shadow within the monochromatic surface of the canvas, shattering the traditional illusionistic three-dimensionality of painting to make the canvas enter real space. To see the back of a painting is a rare and intimate way of experiencing a work of art. Its structure is unveiled, revealing the inscriptions and stamps that trace the physical journey of the painting from its creation in the artist’s studio, to museums, galleries and collections around the world. ‘Recto/Verso: Behind the Italian Monochrome’ at Tornabuoni Art London provides the first 360 degree experience of the works of the Italian avant-garde. This exhibition demonstrates the artists’ desire to blur the lines between painting and sculpture, by showing four artworks the same way they were created: in three dimensions.