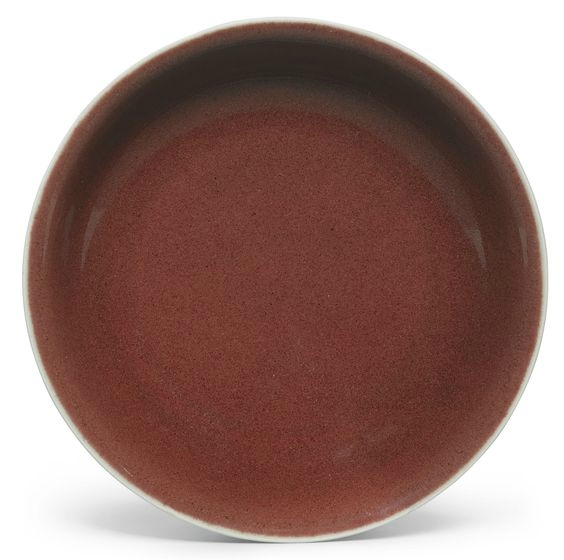 the rounded sides rising from a short tapered undercut foot to a white, slightly everted rim, applied evenly with a sacrificial-red glaze suffused with tiny darker specs, the exterior convex base with a bluish-white glaze and inscribed in underglaze blue with a six-character mark within a double-circle.

Note: The beautiful, rich red glaze of this dish cannot be better described than with the somewhat over-used term ‘crushed strawberries’. Monochrome copper-red glazes were perfected during the Yongle (1403-1424) and Xuande (1426-1435) reigns, but the large number of discarded sherds at the Jingdezhen kiln sites impressively highlights the difficulties experienced by even the highly accomplished imperial potters of that time to achieve satisfactory results. After the Xuande reign, the copper pigment was therefore almost completely abandoned until it was revived on a grand scale, but never again to similarly striking results, in the Kangxi period (1662-1722) of the Qing dynasty (1644-1911).

While copper began to be used at the Jingdezhen porcelain manufactories in the Yuan dynasty (1279-1368) and was experimented with throughout the Hongwu reign (1368-1398), it was only in the Yongle period that a satisfactory bright red began to be achieved after many adjustments of glaze recipes, firing conditions and temperatures; but as Nigel Wood states (Chinese Glazes. Their Origins, Chemistry and Recreation, London, 1999, p. 178), “When we come to examine Xuande (AD 1426-1435) copper-red porcelains from Jingdezhen we are at the very peak of Chinese copper-red porcelain production.”

While both the Yongle and Xuande strata of the waste heaps of the imperial kiln site have brought to light many examples of copper-red pieces that did not meet the high standards of quality control, extant heirloom examples of either period are extremely rare; for discarded copper-red vessels of the Yongle and Xuande reigns, the latter mostly with incised reign marks, see Jingdezhen chutu Mingdai yuyao ciqi [Porcelains from the Ming imperial kilns excavated at Jingdezhen], Beijing, 2009, cat. nos. 18-30 and 44-9, where heaps of copper-red sherds are illustrated, p. 14, figs. 9 and 10.

Two discarded copper-red glazed dishes with underglaze-blue Xuande marks and of the period, one with a fine, deep red glaze on the inside, but a broad area at the rim remaining white on the outside, the other with a mottled greyish red on the outside, were included in the exhibition Imperial Porcelain of the Yongle and Xuande Periods Excavated from the Site of the Ming Imperial Factory at Jingdezhen, Hong Kong Museum of Art, Hong Kong, 1989, cat. nos 69 and 70. Two other red dishes with blue Xuande marks and of the period, also discarded at the kiln site, one perhaps fired somewhat too dark, the other somewhat too pale, were included in the exhibition Jingdezhen chutu Yuan Ming guanyao ciqi/Yuan’s and Ming’s Imperial Porcelain Unearthed from Jingdezhen, Yan-Huang Art Museum, Beijing, 1999, cat. nos. 227 and 228.

A successfully fired copper-red heirloom dish of similar shape, mark and size as the present piece, in the National Palace Museum, Taiwan, was included in the Museum’s exhibition Mingdai Xuande guanyao jinghua tezhan tulu/Catalogue of the Special Exhibition of Selected Hsüan-te Imperial Porcelains of the Ming Dynasty, Taipei, 1998, cat. no. 168, together with another of slightly smaller size, with incised reign mark, cat. no. 170, and a third of similar size, also with incised reign mark and left white inside, cat. no. 169. A similar, slightly larger dish in the National Museum of China, Beijing, is illustrated in Zhongguo Guojia Bowuguan guancang wenwu yanjiu congshu/Studies on the Collections of the National Museum of China. Ciqi juan [Porcelain section], vol. 1: Mingdai [Ming dynasty], Shanghai, 2007, pl. 47. Three copper-red dishes of this form, of Xuande mark and period are preserved in the Shanghai Museum, one slightly larger, two of similar size, but one of the latter with the reign mark incised; see Lu Minghua, Shanghai Bowuguan zangpin yanjiu daxi/Studies of the Shanghai Museum Collections : A Series of Monographs. Mingdai guanyao ciqi [Ming imperial porcelain], Shanghai, 2007, pls 3-42, 3-43, and 3-44; Lu also publishes a modern copy of a red Xuande dish, pl. 5-30; another dish of this type and size in the Tianjin Municipal Museum is illustrated in Tianjin Shi Yishu Bowuguan cang ci/Porcelains from the Tianjin Municipal Museum, Hong Kong, 1993, pl. 80.

A similar dish was twice sold at Christie’s Hong Kong, 1st October 1991, lot 764 and 11th June 1996, lot 29; and one from the Wu Lai Hsi collection, perhaps the same as the present dish or as the latter piece, was sold, unillustrated, in these rooms, 26th May 1937, lot 82; a slightly smaller one was sold in these rooms, 24th July 1968, lot 412; and a slightly larger dish in the Metropolitan Museum of Art, New York, is illustrated in Suzanne G. Valenstein, A Handbook of Chinese Ceramics, New York, 1989, pl. 153; another is in the Sir Percival David Collection in the British Museum, London (A 519). 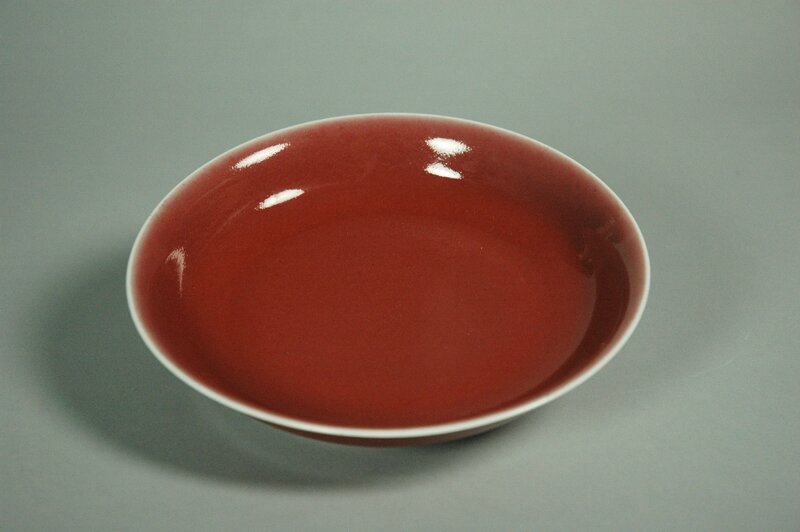 The present dish comes from the collection of Enid and Francis Brodie Lodge (1880-1967), early members and strong supporters of the Oriental Ceramic Society, who contributed to many of the Society’s exhibitions. Their collection comprised ceramics from the Tang (618-907), Song (960-1279), Ming (1368-1644) and Qing dynasties as well as archaic bronzes.