A pair of fine and rare imperial yellow-glazed dishes, Zhengde marks and period (1506-1521)

A pair of fine and rare imperial yellow-glazed dishes, Zhengde marks and period (1506-1521) 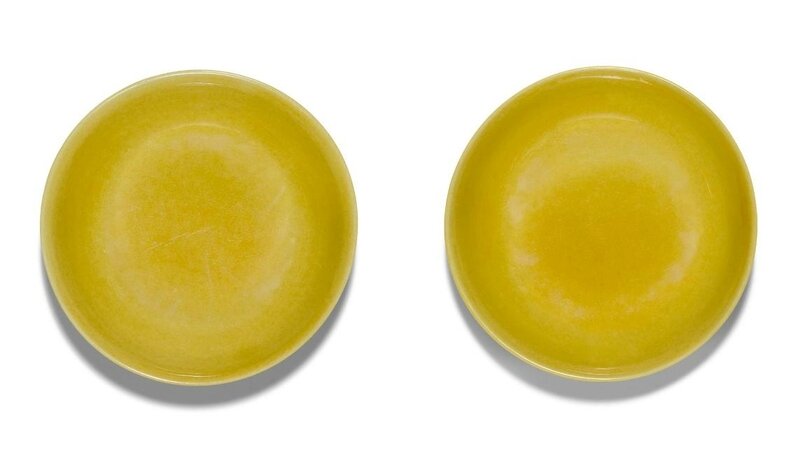 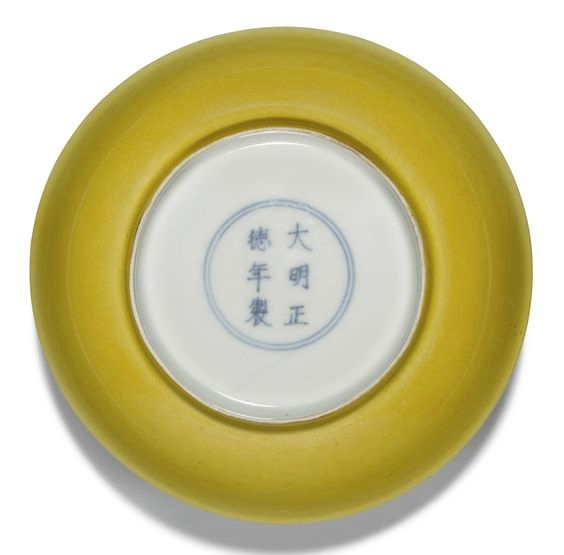 the shallow rounded sides of each rising from a short tapered foot to a slightly everted rim, applied overall with an even glaze of rich egg-yolk tone, the base left white and inscribed in underglaze blue with a six-character mark within a double circle

Note: This pair of dishes is striking for their rich yellow glaze, a colour that was strictly reserved for wares for the imperial court. This 'imperial yellow' glaze was produced at the imperial kilns in Jingdezhen throughout the Ming dynasty and was achieved by adding ferric oxide (3.5 %) to the lead silicate base, making this glaze a direct descendant of the yellow lead glazes of the Tang dynasty. Deceptively simple in form and colour, light-coloured monochrome porcelains required the highest level of skill and precision in the purity of the clay, potting, glazing and firing. Due to the minimalist nature of the pieces, where form and glaze worked together in perfect harmony, the slightest irregularity would result in their rejection and destruction.

Dishes of this form and glaze include one in the British Museum, London, illustrated in Jessica Harrison-Hall, Ming Ceramics in the British Museum, London, 2001, pl. 8:28; another included in the Inaugural Exhibition. Chinese Ceramics, Museum of East Asian Art, Bath, 1993, vol. 2, cat. no. 148; a pair included in the Min Chiu Society exhibition Monochrome Ceramics of Ming and Ch'ing Dynasties, Hong Kong Museum of Art, Hong Kong, 1977, cat. no. 81; and a further dish illustrated in John Ayers, Chinese Ceramics. The Koger Collection, London, 1985, pl. 69. See also a dish of this type from the Edward T. Chow collection, sold in our Hong Kong rooms, 19th May 1981, lot 457; and another from the collection of the R.E.R. Luff Will Trust, sold in these rooms, 26th June 1973, lot 29.