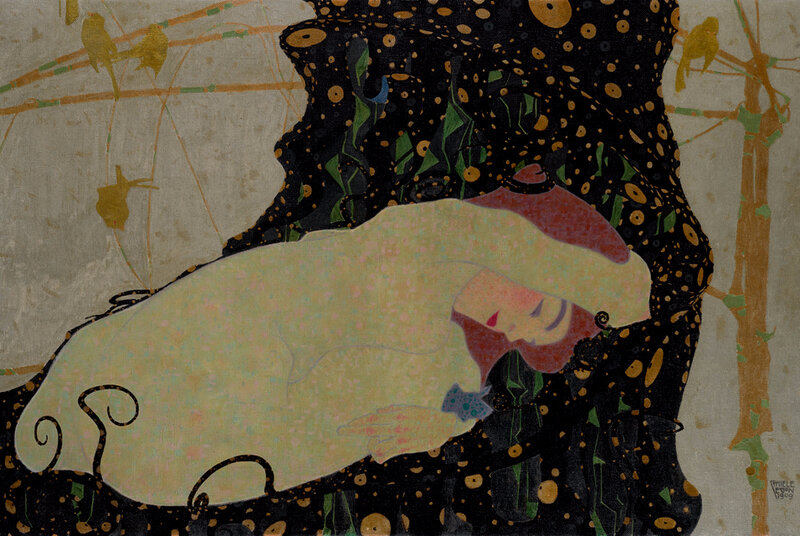 NEW YORK, NY.- Sotheby’s unveiled highlights from its upcoming Evening Sale of Impressionist & Modern Art in New York. The 16 May 2017 auction will be led by Egon Schiele’s first masterpiece: Danaë. Painted in 1909, the work marks Schiele’s first major oil painting of a female nude, and is estimated to sell for $30–40 million. Sotheby’s marquee spring auctions of Impressionist & Modern Art and Contemporary Art will be on public view in our York Avenue galleries beginning 5 May.

AN EARLY MASTERWORK BY SCHIELE
Painted in 1909 when the artist was just 19 years old, Danaë is Egon Schiele’s first early masterpiece and an extraordinary example of his daring technique. Danaë introduces the artist’s iconic aesthetic, and epitomizes the Jugendstil movement’s influence at the time. The composition also pays homage to Schiele’s informal mentor, Gustav Klimt, who championed the young artist throughout his career.

Simon Shaw, Co-Head of Sotheby’s Worldwide Impressionist & Modern Art Department, commented: “It is a privilege to offer this sensational masterpiece by Egon Schiele. Danaë makes a bold and compelling statement, introducing his unique vision: the flattened pictorial space, the angular line, the radical cropping and stippled flesh rendered in pinks and greens. We have witnessed strong demand for breakthrough masterpieces, from Munch’s Vampire to Picasso’s La Gommeuse, and we look forward to presenting Schiele’s Danaë to collectors and museums in May.” .

MONET: FROM GIVERNY TO VÉTHEUIL
The selection of Impressionist pictures on offer this May are led by Claude Monet’s Le Bassin aux nymphéas, a powerful testament to the artist’s enduring creativity in his mature years (estimate $14/18 million). Monet’s paintings of his water lily pond at Giverny rank among the most celebrated Impressionist works. Painted circa 1917-20, Le Bassin aux nymphéas captures the famous pond that served as a boundless source of inspiration, providing the major themes that dominated his final decades. The enduring impact of these late paintings is evident in works of abstraction by artists including Jackson Pollock, Joan Mitchell and Gerhard Richter.

Monet’s Vétheuil is a stunning depiction of the artist’s hometown (estimate $4/6 million). This picturesque location was the site of some of Monet’s most successful Impressionist landscapes during this period, and continued to fascinate him well into his late career. Painted in 1880, the work has descended within the same family collection since 1914.

A RARE SUPREMATIST CANVAS BY MALEVICH
A strong group of early Abstract works are led by Kazimir Malevich’s Suprematist Composition with Plane in Projection of 1915 (estimate $12/$18 million) – a prime example of the artist’s “Suprematist” paintings, which are extremely rare. Coined by the artist during his exhibition at the 0.10: Last Futurist Exhibition of Paintings in Petrograd in 1915 – in which the present work most likely hung – the term refers to Malevich’s fascination with the impact of color and form. For the exhibition, Malevich displayed 39 paintings detached from figurative subject matter. The appearance of Suprematist Composition with Plane in Projection of 1915 in our May auction is particularly timely: Malevich is a focus of the Royal Academy of Art’s recent exhibition Revolution: Russian Art 1917-1932. EXCEPTIONAL SCULPTURE
The evening sale features a number of outstanding sculptures, led by Shaping a Legacy: Sculpture from the Finn Family Collection. Over the course of more than 50 years, David and Laura Finn together have amassed a diverse and esteemed collection of modern sculpture. Through their collecting, they developed not only a staunch patronage but also enduring friendships with many artists – particularly Henry Moore. Mr. Finn photographed and published Moore's sculptures over a number of decades, playing a vital role in expanding the artist’s audience internationally.

Sculpture from the Finn Family Collection is led by Alberto Giacometti’s Buste de Diego (estimate $10/15 million), one of the artist’s most radical and engaging works. Measuring just over two feet in height, the work’s significant size contributes to its robust personification of the Existentialist movement during the contentious years of the Cold War. The bronze depicts one of Giacometti’s most frequent inspirations: his younger brother, Diego. Speaking of Diego: the May sale offers Diego Giacometti’s striking Bibliotheque de l’île Saint-Louis (estimate $2/3 million), which ranks among the most important works of the artist’s career. Measuring over ten-and-a-half feet in height and twelve feet in length, the Bibliotheque de l’île Saint-Louis is among the artist’s largest-scale commissions. 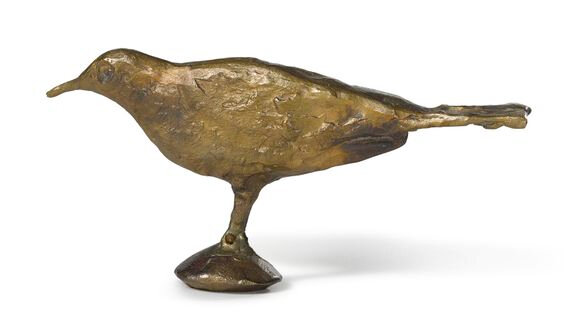 A LATE SELF-PORTRAIT BY PICASSO
Painted in 1969, a little more than a week before his 88th birthday, Pablo Picasso’s self-portrait Tête d’homme (estimate $8/12 million) was first exhibited in a one-man show that the artist curated himself in the hallowed halls of the Palace of the Popes in Avignon. Its grand scale, sweeping Gothic arches and quatrefoil windows were ideally suited to the great scale and impact of Picasso’s paintings from the period, including the present work. In many ways Tête d’homme epitomizes Picasso’s obsession with and admiration for Vincent van Gogh, echoing several elements of that artist’s Self-Portrait with a Straw Hat from 1887. AN EARLY PORTRAIT BY KLIMT
Painted in 1897-98, Gustav Klimt’s Dame im Fauteuil (Woman in Armchair) is a rare example of the artist’s early portraiture (estimate $7/9 million). The work also illustrates his affiliation with the Symbolist painters of the late-19th century. The female sitter is swathed richly in a matching red dress and hat, her narrow waist belted in a deep green. The serenity and delicate pallor of her face is echoed in the ghostly quality of the two outlined heads in the upper left of the composition. BRAQUE’S PIANISTE
La Pianiste represents the pivotal moment in Georges Braque’s career when he synthesized his Cubist sense of space with the vibrant palette of his early Fauve years (estimate $6/8 million). Part of what is considered Braque’s first true series, and recognized as the beginning of his late period, La Pianiste is the only major example of this seminal group to remain in private hands. Other works from this series reside in the most important collections in the world: The Museum of Modern Art, New York; The Metropolitan Museum of Art, New York and the Centre Georges Pompidou, Paris. 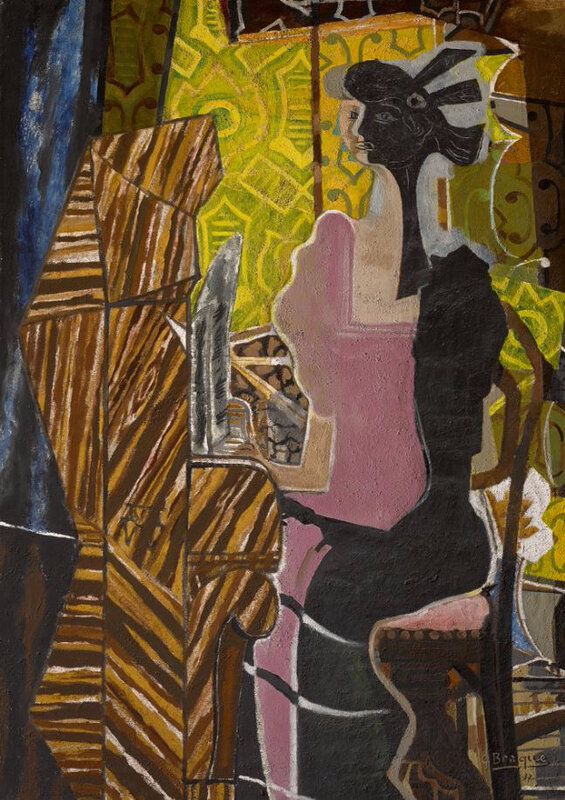 FEININGER’S PARISIAN DEBUT
Feininger made his debut into the world of avant-garde painting in Paris with the spectacular Fin de séance (estimate $6/8 million). The artist chose to include this impressive canvas in the annual Salon des Indépendants in the spring of 1911, where it hung alongside works by Matisse and Kandinsky, as well as the debut of Picasso and Braque’s revolutionary Cubist compositions. When Feininger moved to the United States in 1937 on the eve of the war, Fin de séance was one of approximately 50 works from his early oeuvre that he left in the care of an associate in Quedlinburg, Germany. It was not until 1984, nearly 30 years after his death, that the pictures were finally returned to Feininger’s heirs in the United States. 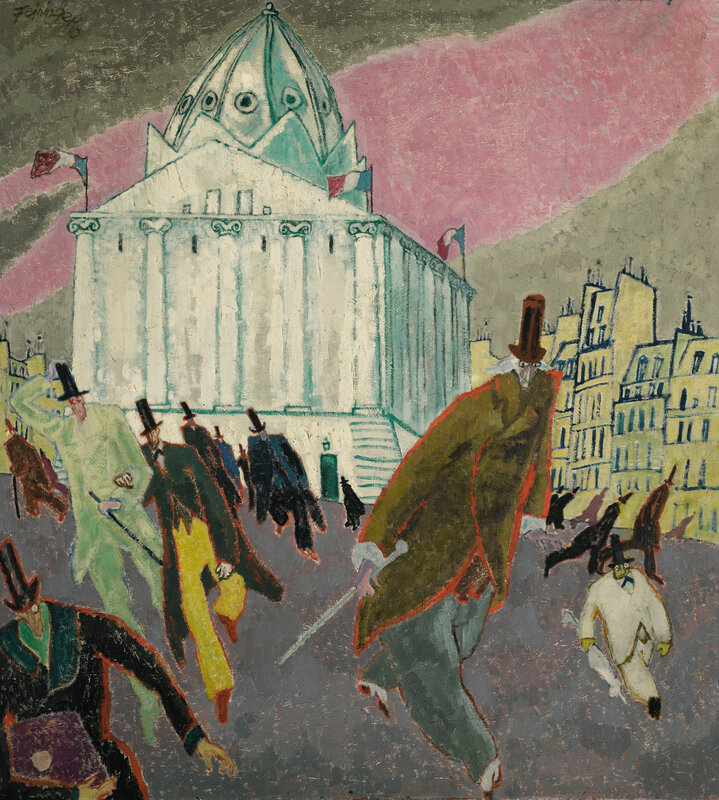 PROPERTY FROM A DISTINGUISHED PRIVATE COLLECTION
Works emerging from a Distinguished Private Collection include Impressionist pictures by Paul Signac, Alfred Sisley and Pierre Bonnard, as well as an important early sculpture by Alexander Archipenko. The group is led by Signac’s Le Pin de Bertaud (estimate $3.5/5 million), a spectacular view of Saint-Tropez painted in 1899-1900 at the crescendo of his time as leader of the Neo-Impressionists. Conceived in 1913 at the height of the Cubist movement, Blue Dancer is one of Archipenko’s greatest achievements as a sculptor (estimate $1.5/2.5 million). The compelling work demonstrates the dynamic relationship between the figure and its surrounding space with a gracefulness reminiscent of Degas’s bronze dancers. 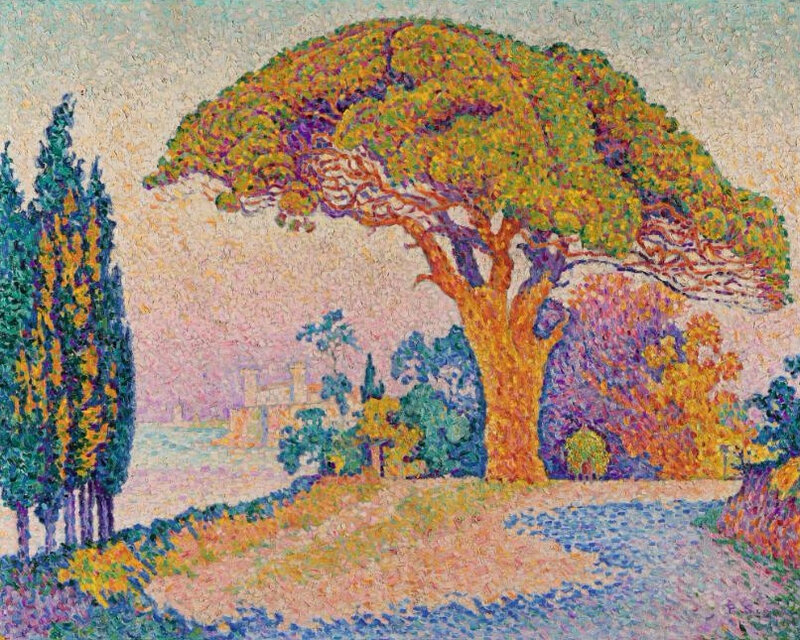