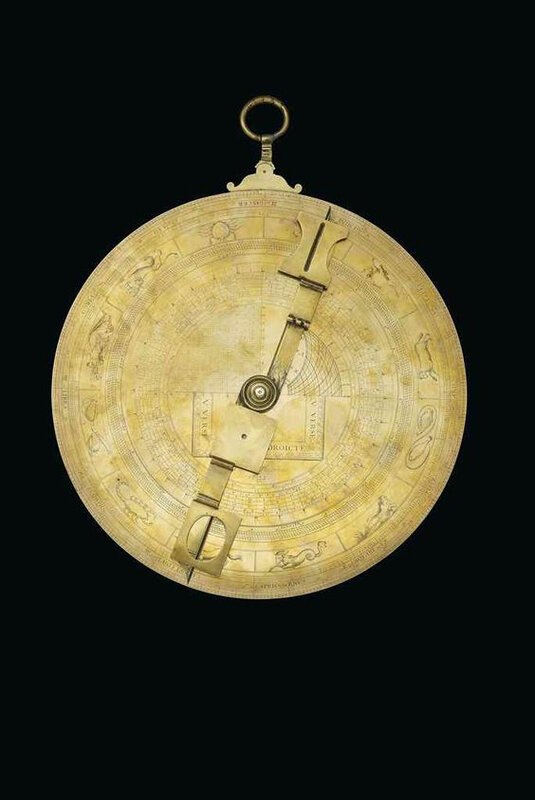 The brass mater with throne and suspension shackle above, the rim graduated with two degree scales and one for hours, the inside of the womb plain with two plates, the first with stereographic projections to each side for 45° and 51°, the second with stereographic projection for 48° and a universal projection to reverse, rule with engraved decoartion atop pin with thread and finial to revserse. The reverse of the astrolabe signed Par M. Taurnier. 1632. beneath a shadow square, a trigonometric grid and a diagram of equal hours, around these a lunar calendar, epact, solar cycle, Dominical letters for years1628-1672, monthly calendar and zodiac scales with finely engraved representations of their constellations, the decorated alidade with three folding sight vanes. The rete with graduated ecliptic, cut away for three stars.

Note: The astrolabe's origin probably dates at least as far back as the ancient Greek astronomer Hipparchus (c. 190-120 BC). As with so much astronomy, through the traditions of medieval Islamic science it was reintroduced to the Latin West by the thirteenth century, where it became a key time-telling instrument. Their production in Europe reached its zenith in the late Renaissance when they were made for princely collections and came to be the iconic instrument of astronomical knowledge.

A brass plate, the rete, carries hooked pointers for named stars and acts as a rotating celestial map above a grid that shows the lines of altitude and azimuth in the night sky; the owner of the astrolabe would be able to change the plate carrying the grid depending on how far North or South they were -- the mapping of the night sky onto a flat disc is done via a stereographic projection. The reverse of the astrolabe carries a compendium of different projections, a sundial and grid for trigonometry calculations, a calendar and a shadow square that can be used to measure the heights of buildings. Around the back plate rotates an alidade with pinhole sights that are used to observe the height of the Sun or a given star (the taking of a star's position gives the ancient greek etymology astro-labos, 'star-taker').

Melchior Tavernier (1564-1641) is recorded as a map dealer and publisher in Paris working from L'Isle du Palais with a Royal appointment as 'Graveur et Imprimeur du Roy'. His nephew, Melchior Tavernier the Younger (1594-1665) carried on publishing at the same address after 1641, and other than a book on sundials no other instruments are known to survive by the Tavernier family. Tooley records them as cooperating with two great names of cartography - Hondius and Jansson. The style of engraving on whose later globes bears a strong resemblance to this astrolabe. Whilst stylistic similarities to the astrolabes of makers from the Louvain school such as Arsenius or Zeelst is perhaps a result of the Taverniers being born in Antwerp before moving to Paris, the reverse of the mater is reminiscent of an astrolabe attributed to Philippe Danfrie at the Museum of the History of Science in Oxford (Inv. no. 35082). The pierced ecliptic on the rete to accommodate the pointers of certain stars is a particularly elegant and perhaps unique feature this important survival.