A rare and impressive blue and white Iznik pottery dish, Ottoman Turkey, circa 1530-35

A rare and impressive blue and white Iznik pottery dish, Ottoman Turkey, circa 1530-35 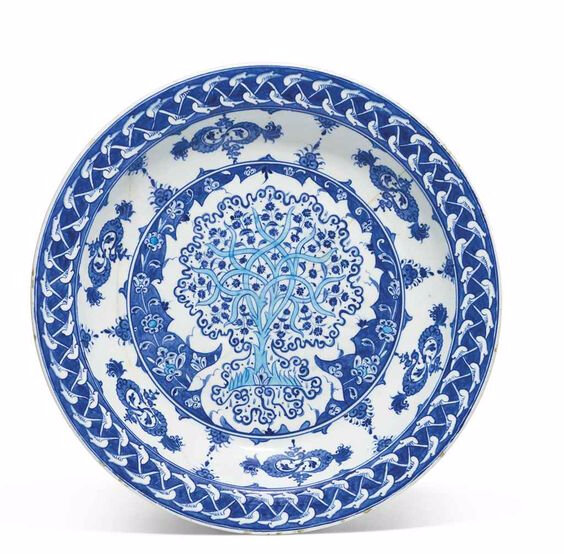 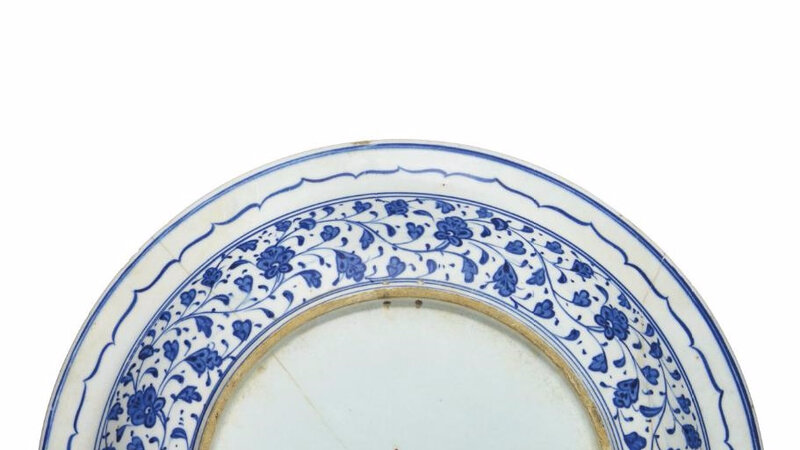 The white ground decorated under the glaze in turquoise and cobalt-blue, the exterior with scrolling vine beneath a cusped line, underside with an old collection label, repaired breaks.

Note: Julian Raby and Nurhan Atasoy who published this extraordinary dish in 1989 assigned it to the ‘Potters’ Style’, and dated it to between 1525-35 (Nurhan Atasoy, and Julian Raby, Iznik, The Pottery of Ottoman Turkey, published for Istanbul University, 1989, no.168). The Potter’s style, whilst distinct for its particular palette and use of space, also provided a canvas for the craftsmen of Iznik who by the 1520s had mastered a style that was characterized by artistic independence – “simple in structure…rapid in painting [and] though mostly derivative in its constituent motifs…independent in spirit” (Atasoy and Raby, 1989, p.115).

The ‘tree of life’ that dominates the center of our dish is extremely unusual and plays to this independence of spirit. The adoption of new representational motifs was one of the developments of this period of Iznik production. Only a handful of other dishes decorated with trees are known. Two others - also in the ‘Potter’s style’ - are in the Victoria and Albert Museum and the Antaki Collection, Aleppo. The V dish is decorated with a tree inhabited by a snake who winds himself around the trunk in hunt of an unsuspecting bird (dated to 1530-35, Esin Atil, The Age of Sultan Süleyman the Magnificent, exhibition catalogue, Washington DC, 1987, p.254, no.176). Like ours it employs the small flowers of the free-hand Potter’s style which draw their inspiration from Golden Horn ware. On our dish these form floral tendrils associated with the tree and on the V dish they make up a simple border on the cavetto. The Antaki dish, similarly dated, has the tree motif also contained within a central roundel, as ours, but there surrounded by flowering grape vine, a lotus blossom cavetto and a scale border (Atasoy and Raby, 1989, no.171 and 316).

Our dish, like the two noted above, certainly demonstrates the independent spirit of the Iznik potters of this period, whilst borrowing from well-established decorative idioms. Many of the features of our dish are indebted to the Baba Nakkas style of 1470-1520. The cloud bands of the cavetto, for instance, find parallel in the charger by the ‘Master of the Knots’ formerly in a Private Collection in Beirut and now in the Sadberk Hanim Museum, dated to circa 1510-15 (Atasoy and Raby, 1989, no.291). The palmette rim harks back to the rumi-arabseque decoration, such as that found on the central roundel of a rare blue and white Iznik bowl sold at Christie's, London, 10 April 2014, lot 188 (now in the Ömer Koç Collection and published in Hülya Bilgi, The Ömer Koç Iznik Collection, Istanbul, 2015, pp.80-85, no.1). The small grassy tufts with comma-shaped leaves that grow from the border of the central roundel, also find parallels in that bowl. The dish also includes lotus blossoms which recall the work of the ‘Mater of the Lotuses’ that decorate lamps made for Sultan Bayezid II’s tomb, commissioned by his son Selim in 1512-13 (one such lamp is in the British Museum (inv.no.G.5), formerly in the Godman Collection). Though not many examples are known, the tree motif is also found occasionally on later Iznik dishes. See, for example, the dish offered as lot 153 in this sale.

Fernand Adda, in whose collection this dish was, was born in Alexandria to the wealthy cotton merchant and art collector Abraham Adda. He spent most of his life in France between his house in Paris and yacht in Cannes. For a long period starting in the 1920s, he amassed an impressive group of Iznik ceramics from every period, as well as early Persian and Syrian wares, Spanish lustre-ware and Italian majolica, which he displayed in his house in Paris. His ceramics collection was published anonymously in an illustrated catalogue by Bernard Rackham in 1959, in which this dish features. Rackham wrote that ‘the collection illustrates with a completeness hardly to be paralleled the ceramic art of Asia Minor in the age when the Turkish rulers were ta the height of their power on the shores of the Bosphorus’ (Bernard Rackham, Islamic Pottery and Italian Majolica, London, 1959, p.3). Fernand Adda’s collection was largely dispersed after his death at a landmark sale in Paris in 1965. This dish however remained with the family, and is offered from their collection today.