An impressive 10.28 carats diamond single-stone ring by Van Cleef & Arpels caught the eyes of buyers around the world as it sold for £311,000 at Bonhams London Fine Jewellery sale this week (27 April 2017).

The E colour marquise-cut diamond, classified as Type IIa, meaning that it has been recognised as the most chemically pure and with exceptional optical transparency, was estimated at £150,000-200,000. Another diamond which sparkled at the sale was a single stone, 5.01 carats Octagonal Step-Cut Diamond which sold for £81,250. 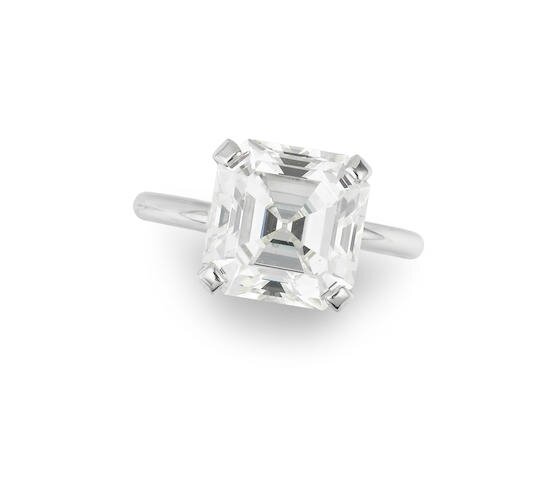 Diamonds from the 19th century also performed well at the sale with A Diamond Rivière Necklace – featuring 45 collet-set cushion-shaped diamonds weighing 43.00 carats in total – sold for £115,000 against its pre-sale estimate of £60,000-80,000. Faudel-Phillips was appointed Sheriff of London and Middlesex (1884-85), succeeded his father as Alderman of the Ward of Farringdon Within (1888), and became a Governor of the Honorable Irish Society (1894). The following year, he was created High Sheriff of the County of London and in 1896 he became Lord Mayor of the City of London.

As Chief Magistrate of the City of London, Faudel-Phillips received Queen Victoria at Temple Bar on the occasion of the Jubilee thanksgiving service which was held at St Paul's Cathedral and subsequently at the Mansion House. His year of office was one of remarkable philanthropy; he raised funds which amounted, in the aggregate, to £1,000,000 for the relief of famine in India and for other charitable objects. He was created a baronet and in recognition of his services to India, received the Grand Cross of the Indian Empire. He also received numerous foreign decorations. Sir George Faudel-Phillips also served the Jewish community as president of the Jews' Orphan Asylum and of the Society for the Relief of the Jewish Blind. Accompanied by a report from Anchorcert stating that the pink diamond is of natural colour. Report number 1/20571-001, dated 8 July 2010. Art Deco jewellery in high demand
Jewellery from Cartier continues to exceed pre-sale estimates at auction due to its exceptional quality, rarity and a global appreciation of the Art Deco era.

Two notable pieces by Cartier were much admired during the previews in London, Geneva and New York earlier this month.

The first, an elegant Art Deco Diamond Bracelet, designed as a finely pierced articulated strap of geometric motifs, decorated with cushion-shaped old brilliant and single-cut diamonds, dated circa 1925, sold for £50,000, against its pre-sale estimate of £20,000-30,000. The second, an Art Deco Diamond Brooch, dated circa 1930, featuring a repeating arabesque design, set throughout with bullet-shape, old brilliant, baguette and single-cut diamonds, sold for £22,500, against its pre-sale estimate of £10,000-15,000. 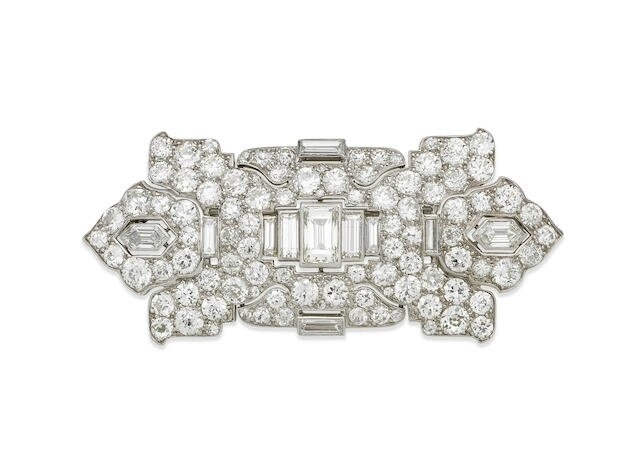 Strong appetite for signed jewellery
Signed jewellery from the world's most famous houses continues to be extremely desirable to buyers and collectors across the world. Key pieces which performed well during the sale included:

• A highly desirable Diamond 'Fuchsia' brooch and earring suite by Van Cleef & Arpels. The diamond suite, consisting of 27.05 carats, was much admired during the pre-sale previews, appealing to collectors of period Van Cleef & Arpels given the small quantities made. It went under the hammer for £87,500. 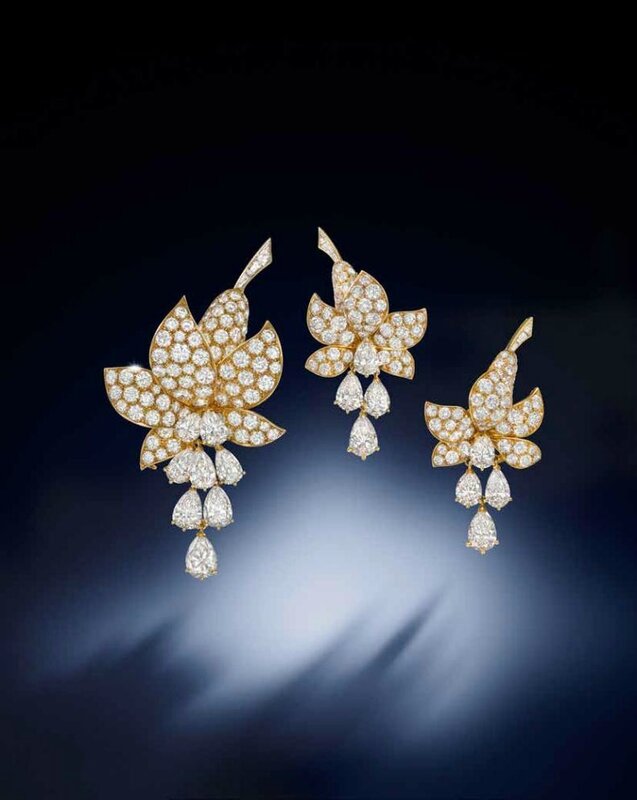 An enamel and diamond 'Serpenti' bracelet-watch by Bulgari, circa 1965-70, sold for £68,750 against its estimate of £50,000-60,000. Iconic in its design, this is a rare surviving example of the famed Bulgari Serpenti bracelet watch. The highly articulated bracelet is composed of a series of overlapping scales applied with orangy-yellow and red enamel. The serpent's head features a forked tongue and marquise-cut diamond eyes, its mouth opens to reveal a circular watch dial signed Vacheron Constantin. 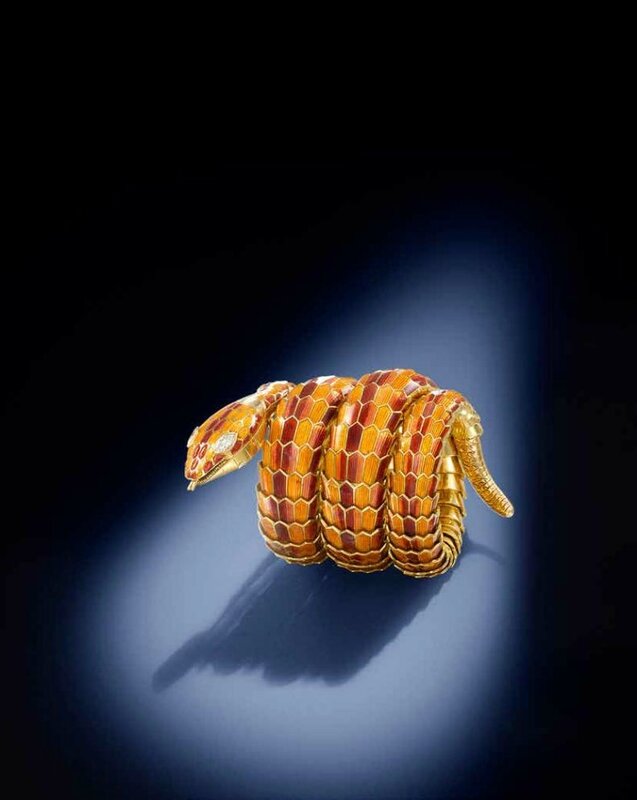 Note: Bulgari's "Serpenti" collection of jewellery and watches date from the late 1940s and has achieved iconic Bulgari status and is still today one of firm's most popular designs. This popularisation was partly thanks to the late Elisabeth Taylor, who was photographed wearing one of the first "Serpenti" watches on the set of the film 'Cleopatra' in 1962.

This early example of the "Serpenti" bracelet-watch displays the intricate manufacture of each "Serpenti" made in the second half of the 1960s. The hand crafted gold spring core, enabling the flexible serpent to coil and cling around the wrist.

Inscriptions were often marked on the undertails referring to specific species whose skins inspired the enamel work. This particular example is of a 'Serpe dei Ratti Giallo', or a Yellow Rat Snake.

Appreciation of spinels continues to soar
One of the most charming stones in Bonhams April sale was An Early 20th century spinel and diamond ring. Dated circa 1915, the step-cut spinel, originating from Burma and weighing 5.30 carats, has no indications of heat treatment and boasts exceptional transparency and intensity of colour. Estimated at £15,000-20,000, it went under the hammer for £65,000, more than four times its estimate. Accompanied by a report from GCS stating that the spinel is of Burmese origin, with no indications of heating. Report number 5777-9067, dated 27 February 2017.

Artist jewellery
Jewellery from artists such as Andrew Grima, John Donald and Stuart Devlin continues to gain momentum. These jewellers created jewels where the value lay in their aesthetic composition rather than the carat weight of expensive diamonds and gemstones used. In this particular sale, a number of pieces by Andrew Grima, the Anglo-Italian designer who became known as the doyen of modern jewellery design in Britain, achieved strong prices. These include:

•A gold, diamond and fire opal brooch/pendant, 1970. The oval-cut fire opal set amongst an abstract arrangement of textured 18 carat gold cinnamon sticks, with a brilliant-cut diamond accent sold for £8,500 against its estimate of £5,000-7,000. Exhibited: Grima Retrospective, Goldsmiths' Hall, London, May 1991, no 102, in the exhibition catalogue, colour illustration and description on page 58.

This lot is accompanied by the limited edition book, Grima, by Johann Willsberger, 1991, an original illustration of another necklace by Grima and a signature panel from Andrew Grima. 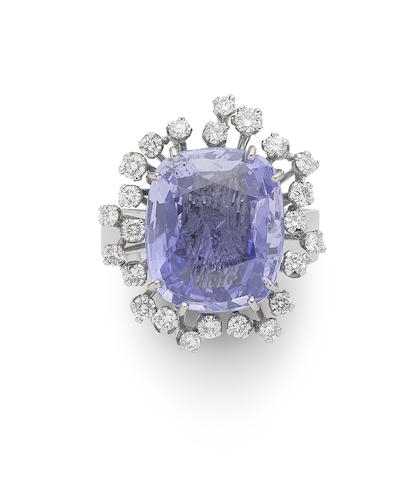 Jean Ghika, Head of Jewellery for Bonhams UK & Europe, says: "It is encouraging to see such strong prices achieved at our first auction of 2017. There is an increasing appetite from our clients globally for the finest examples of jewellery, coloured and white diamonds and gemstones, and we expect this to gain further momentum throughout the year."