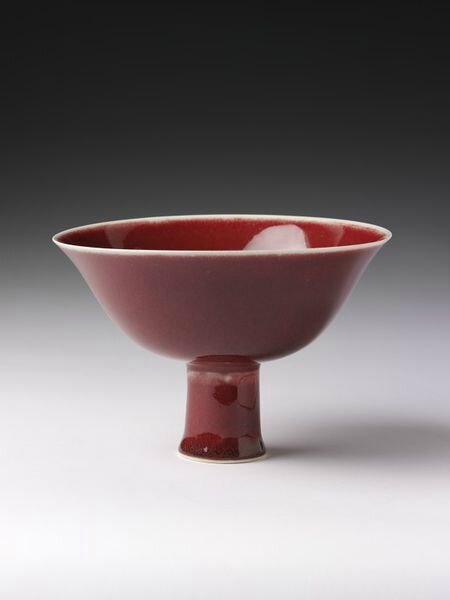 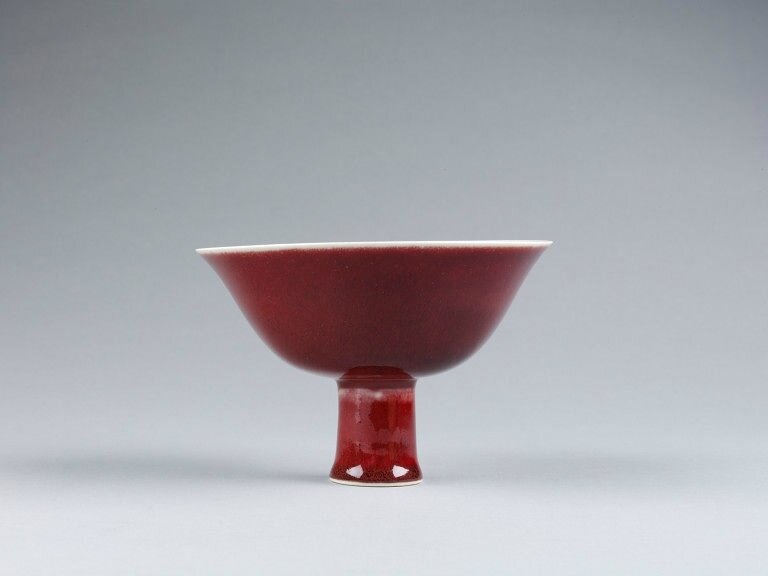 This red porcelain stemcup is a rare example of a cup decorated with a red glaze, derived from the red oxide of copper. It dates to the beginning of the Yongle reign period (1403-1424). This type of cup is called quanbei, literally 'urging cup', which refers to the fact that the drinker would toast his companions and at the same time urge them to refill and drink from their own cups.

The results of recent excavations conducted at the sites of the imperial kilns in Jingdezhen have shown that there was a large quantity of discarded red glazed pieces, around 80% of which did not reach the quality standards required.

The red glaze of this wine cup is derived from copper, a mineral that is highly fugitive as a red colourant. The glaze has fired to a beautiful even red, except at the rim, where the colour has beld away from the sharp edge.

In the fourteenth century Jingdezhen potters had attempted underglaze painting in much the same manner as contemporary work in cobalt blue (see p.48). The results, however, were not always successful, some pieces misfiring to a dark grey instead of the intended bright red. It was not until the reign of the Ming Emperor Yongle that potters finally mastered the techniques of firing an even colour. Imperial intervention was the main reason for the breakthrough. Yongle, who had recently established the capital in Beijing, wanted monochrome vessels placed at the altars where he performed sacrifices - blue for Heaven, yellow for Earth, red for the Sun and white for the Moon. Red had a special significance, as the surname of the emperor was 'Zhu', which means 'red'.

Expertise in firing copper red was lost after 1435: those very few red-glazed vessels produced soon after this date have a rather unattractive liver colour, and we know that the emperor was petitioned to cancel orders for red-glazed vessels because 'all attempts ended in failure'. Copper-red glazes reappeared in the eighteenth century, when they were a reinvention rather than a revival, as the composition of this later glaze is very different from its Ming predecessor.