BILBAO.- The Guggenheim Museum Bilbao is presenting Paris, Fin de Siècle: Signac, Redon, Toulouse - Lautrec, and Their Contemporaries , an exhibition that analyzes the Parisian art scene, underscoring the most important French avant-gardes of the late 19th century, particularly the NeoImpressionists, Symbolists, and Nabis. The leading exponents of these movements are represented in the show by approximately 125 paintings, pastels, drawings, and prints.

Fin-de-siècle Paris was a time and place of political upheaval and cultural transformation, during which sustained economic crisis and social problems spurred the rise of radical left-wing groups and an attendant backlash of conservatism that plagued France throughout the late 1890s. In 1894, President Sadi Carnot fell victim to an anarchist assassination, while the nationally divisive Dreyfus Affair began with the unlawful conviction for treason of Alfred Dreyfus, an officer of Alsatian and Jewish descent. Such events exposed France’s social and political polarization: bourgeois and bohemian, conservative and radical, Catholic and anticlerical, anti-republican and anarchist. Mirroring the facets of an anxious, unsettled era, this period witnessed a spectrum of artistic movements. By the late 1880s, a generation of artists had emerged that included NeoImpressionists, Symbolists, and Nabis. Their subject matter remained largely the same as that of their still-active Impressionist forebears: landscapes, the modern city, and leisure-time activities. However, the treatment of these familiar subjects shifted and these scenes were joined by introspective, fantastical visions and stark portrayals of social life.

The exhibition takes a closer look at these avant-garde movements, concentrating especially on some of the most prominent artists of that time: Pierre Bonnard, Maurice Denis, Maximilien Luce, Odilon Redon, Paul Signac, Henri de Toulouse-Lautrec, and Félix Vallotton. The ambition to spontaneously capture a fleeting moment of contemporary life gave way to the pursuit of carefully crafted works that were anti-naturalistic in form and execution and sought to elicit emotions, sensations, or psychic changes in the viewer. Despite their sometimes contradictory stances, these artists shared the goal of creating art with a universal resonance, and there was even overlap among members of the different groups. Surveyed together, the idioms of this tumultuous decade map a complex terrain of divergent aesthetic and philosophical theories, while charting the destabilizing events at the brink of a new century. 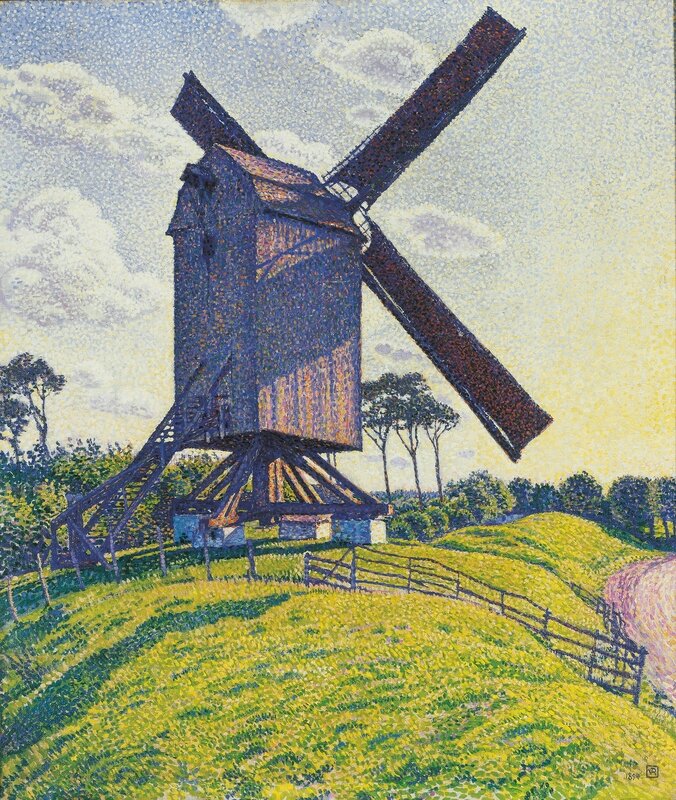 Gallery 305: Neo-Impressionism
The Neo-Impressionists debuted as an entity in a gallery of the Eighth (and last) Impressionist Exhibition in Paris in 1886, led by Georges Seurat. That same year, Félix Fénéon, an art critic and champion of these artists, coined the term “Neo-Impressionism” in a review. When Seurat died at an early age, Paul Signac took his place as the leader and theorist of the movement. The principal Neo-Impressionists—Henri-Edmond Cross, Maximilien Luce, Seurat, and Signac—were joined by the former Impressionist Camille Pissarro as well as other like-minded artists, such as Belgian painter Théo van Rysselberghe, from nearby countries. These vanguard painters looked to scientific theories of color and perception to create visual effects in Pointillist canvases, inspired by the optical and chromatic methods developed by scientists. The theories of French chemist Michel-Eugène Chevreul set out in the Principles of Harmony and Contrast of Colors, and Their A pplication to the Arts (in French, De la loi du contraste simultané des couleurs et de l’a ssortiment des objets colorés, 1839) and American physicist Ogden Rood in Modern Chromatics (1879) were particularly influential. This modern, revolutionary painting technique was characterized by the juxtaposition of individual strokes of pigment to evince the appearance of an intense single hue. By thus orchestrating complementary colors and employing mellifluous forms, the Neo-Impressionists rendered unified compositions. The representation of light as it impacted color when refracted by water, filtered through atmospheric conditions, or rippled across a field was a dominant concern in their works. Most of the Neo-Impressionists shared left-wing political views, evident, for example, in Pissarro’s and Luce’s depictions of the working classes. The idealized visions of anarcho-socialism or anarchocommunism were also manifest in the utopian scenes that the Neo-Impressionists frequently represented in their works, which often married ideological content and technical theory. But even when not guided by political objectives, the Neo-Impressionists’ shimmering interpretations of city, suburb, seaside, or countryside reflected a formal quest for harmony. Gallery 306: Symbolism
Symbolism began as a literary movement in the 1880s and its principles were codified in 1886 when poet Jean Moréas published the “Symbolist Manifesto” in the French newspaper Le Figaro . But the idealist philosophies and highly stylized formal qualities of the idiom quickly infiltrated the visual arts. The term "Symbolism" is applied to a variety of artists who shared anti-naturalistic goals. Sometimes Neo-Impressionist or Nabis works were identified with Symbolism because of their peculiar forms and allusive subject matter, such as those by Maurice Denis, who looked to religion and allegory and used sinuous lines and flattened zones of color or all-over patterning. Indeed, artists associated with Symbolism did not always define themselves as such. One of the most important was Odilon Redon, although his eerie noirs of floating, disembodied heads, creeping spiders, and scenes unmoored from reality, their meaning enigmatic and locked in hermeticism, are closely associated with the Symbolist style. 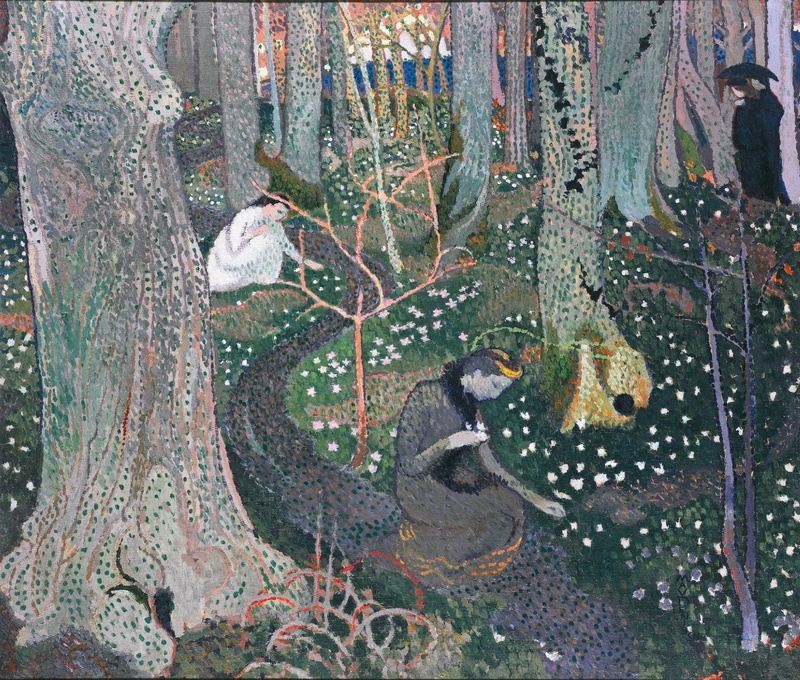 Most of the artists connected to Symbolism were averse to materialism and had lost faith in science, which had failed to alleviate the ills of modern society. They chose instead to probe spiritualism and altered states of mind, believing in the power of evocative, dreamlike images. Decorative idioms, nourished by Art Nouveau’s organic motifs and arabesque forms, permeated their work. 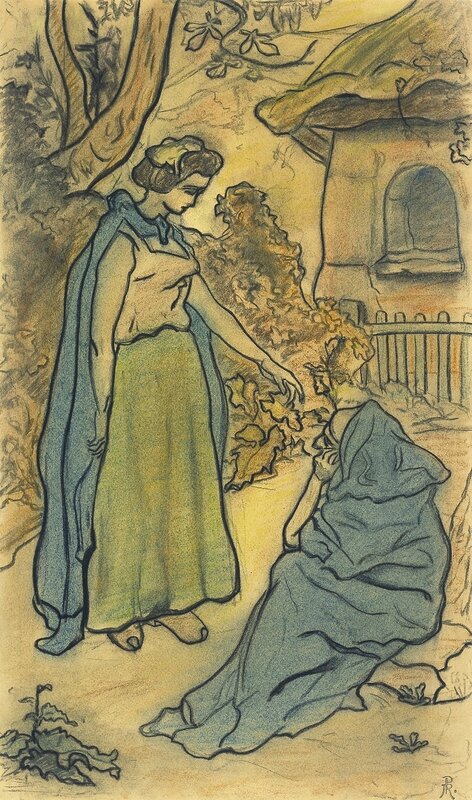 Symbolist art embraced mythic narratives, religious themes, and the macabre world of nightmares, abandoning the factual for the fantastic, the exterior world for the drama of psychological landscapes, the material for the spiritual, and the concrete for the ethereal. Although deeply rooted in narrative, Symbolism sought to elicit abstracted sensations and, through subjective imagery, to convey universal experience. These impulses responded to a yearning engendered by the dark side of modernity—the search for the transcendent. Gallery 307: The Nabis and the Print Culture in the 1890s
Following the 1890 exhibition of Japanese prints at the École des Beaux-Arts, printmaking experienced a renaissance in France, both in lithography and woodcut. This revival was launched primarily by the Nabis, along with artist Henri de Toulouse-Lautrec. The Nabis (from the Hebrew word meaning “prophets”) were a loosely connected brotherhood whose art was influenced by the flat planes of color and pattern of Paul Gauguin’s Synthetism and by the abrupt cropping and twodimensional compositions of Japanese prints. Renouncing easel painting, the Nabis’ work crossed media to prints, posters, and illustrations for journals such as La Revue blanche , co-owned by their patron Thadée Natanson. As a “low” art exempt from the academic rules that governed painting, printmaking offered an artistic freedom that many found attractive. During the 1890s artists experimented with the possibilities of the stark contrasts of the woodcut, as Félix Vallotton did with his inventive use of black-and-white in scathing commentaries on Parisian society. Other Nabis, like Pierre Bonnard and Édouard Vuillard, were enthralled with color lithography and tested the limits of the medium in myriad ways, even introducing manipulations during the printing process, by working closely with master printer Auguste Clot. They produced posters and print portfolios commissioned by dealers, perhaps most importantly gallerist Ambroise Vollard. Toulouse-Lautrec turned his energies to the art of the poster, creating highly reductive yet incisive scenes of city life. These large-scale, eye-catching, brilliant creations were short-lived advertisements pasted along the streets of Paris. Passers-by (potential consumers) were inevitably seduced by exciting caricature-like portrayals of the bohemian venues they advertised: the caféconcerts of Montmartre or the famed performers who headlined there, including La Goulue (the glutton) and Jane Avril. The lively, often unconventional existence celebrated in these prints and posters came to define fin-de-siècle Paris.