A blue and white ‘mythical animals’ bowl, Wanli six-character mark in underglaze blue and of the period (1573-1619)

A blue and white ‘mythical animals’ bowl, Wanli six-character mark in underglaze blue and of the period (1573-1619) 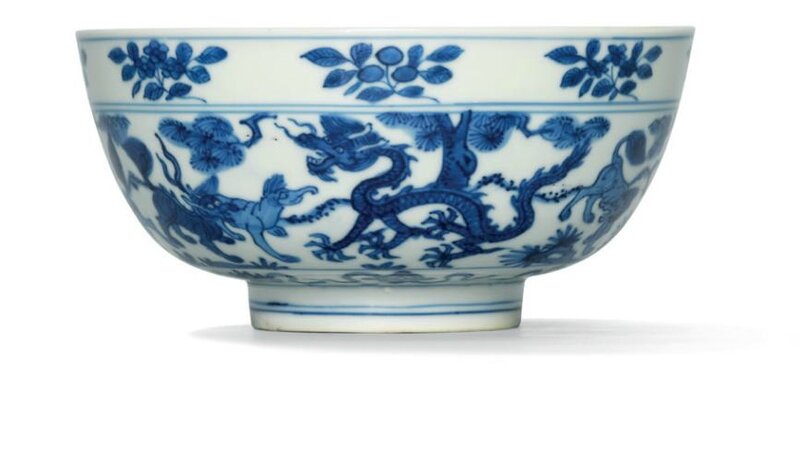 The deep rounded sides are well painted with a continuous band of animals, including five-clawed dragons, fox, qilin and ox, above six of the Eight Treasures around the foot and below a band of detached flowering and fruiting sprays around the mouth rim. The centre of the interior is painted with a medallion enclosing a five-clawed en facedragon coiling around a flaming pearl, Japanese wood box..

Note: Wanli-marked blue and white bowls of this pattern are rare, and only two other examples appear to have been published, the first was sold at Christie’s Hong Kong, 1 June 2011, lot 3827, and the second was sold at Sotheby’s Hong Kong, 8 April 2013, lot 3122. Elements from this bowl can be found on other published examples decorated with mythical scenes from the Wanli period. Compare the fruiting sprig border beneath the rim as well as the interior ‘dragon’ roundel with an example decorated with a scene of Li Ji slaying a snake included in the University of Hong Kong exhibition The Fame of Flame, Imperial Wares of the Jiajing and Wanli Periods, Hong Kong, 2009, Catalogue no. 80, and the depiction of qilin with a dish, ibid., no. 87. Commentaires sur A blue and white ‘mythical animals’ bowl, Wanli six-character mark in underglaze blue and of the period (1573-1619)