Renaissance Venice. The Triumph of Beauty and the Destruction of Painting at Museo Thyssen-Bornemisza

Renaissance Venice. The Triumph of Beauty and the Destruction of Painting at Museo Thyssen-Bornemisza MADRID - From 20 June to 24 September 2017, the Museo Thyssen-Bornemisza is hosting Renaissance Venice. The Triumph of Beauty and the Destruction of Painting, an exhibition devoted to Venetian art of the sixteenth century – its first zenith – and featuring nearly 100 works by artists such as Titian, Tintoretto, Veronese, Bassano, Giorgione and Lotto. It sets out to show how the specific devices of Venetian painting, from the use of chiaroscuro and colour as the bases for representing figures and space to a closer attention to nature than was advocated by the classical tradition, more idealistic in its conception, embodied a fully Renaissance idea of beauty that was on a par with, and sometimes superior to, the art then being produced in Rome, Parma and Florence.

Curated by Fernando Checa Cremades, professor of Art History at the Universidad Complutense, the show examines this hub of art production, which is essential to understanding the history of painting, through a careful selection of the subjects depicted by the masters who earned it universal fame rather than from a chronological or stylistic approach. It features an outstanding group of paintings and a few sculptures, prints and books from private collections and museums such as the Galleria dell´Accademia in Venice, the Fondazione Accademia Carrara in Bergamo, the Palazzo Pitti in Florence, the Kunsthistorisches Museum in Vienna, the Galeria degli Uffizi in Florencia, the Musée du Louvre in Paris and the National Gallery in London.

The triumph of beauty

After centuries of looking to the East, even China (Marco Polo’s famous voyages), the fall of Constantinople into Turkish hands in 1453, the defeat of the Serenissima Repubblica by Louis XII of France’s armies at Agnadello in 1509 and the shift in the trade routes following the discovery of America in 1492 changed Europe’s political, economic and commercial geography. Venice was in danger of being left on the fringes.

It was then, however, that an artistic awakening began, especially in painting and architecture, placing the city at the centre of a debate that started in Italy and spread to Europe in the late 1500s and above all the 1600s. Venice began to shape its own idea of beauty and became the main alternative to the aesthetic paradigms of Florence and Rome embodied by Raphael and Michelangelo. Whereas the classical or Tuscan-Roman approach attached greater importance to the intellectual aspect through drawing (disegno), previously conceived in the mind (idea), the artists of the Venetian school were more skilled at handling colour and the visual and sensual aspects of painting.

The destruction of painting

As in other parts of Italy, classicism did not remain in vogue for long. The late works of Titian, Tintoretto, Veronese and Bassano show how, in varying degrees and highly diverse ways, each of these artists adopted a more “open”, loose brushwork – often described as patches or smudges – which not only questioned the values of disegno as one of the essential parts of painting but even the Renaissance idea of beauty based on idealising reality.

This was not only a formal issue: the technique also imbued figures, landscapes and nature with greater expressiveness and life, a characteristic typical of the Baroque. From there it was a short step to heightening the dramatic elements of the image, which was very common practice in the paintings produced in the 1560s and 1570s by Bassano, Tintoretto and above all Titian, such as the Christ on the Cross (c. 1565). This matchless example of the dramatic qualities of the master’s final period draws the exhibition to a close.

Renaissance Venice. The Triumph of Beauty and the Destruction of Painting is structured into eight theme-based sections.

Between East and West: The most beautiful city in the world

The medieval splendour of the city of Venice captivated visitors throughout the 16th century. In 1500, a symbolic year, Jacopo de’ Barbari produced his View of Venice, the first realistic bird’s-eye view of a city. This extraordinary picture is shown in this room alongside portraits of Venetian authorities such as the Doge Mocenigo (Gentile Bellini), the procurators Gritti and Soranzo and a senator (works by Tintoretto), and a famous painting by Veronese in which two figures in Oriental dress illustrate the city’s cosmopolitan nature as a frontier between two worlds, East and West. Venice and the dream of Classicism

The Renaissance cultural scene that Venice wished to be part of called for rapidly renovating the medieval city, whose Gothic and Byzantine architecture needed to be given a new, classicist appearance. Architects, humanists, publishers and collectors quickly set to work, studying the classical texts such as Vitruvius’s architectural treatise, the only surviving work on the subject, or writing new ones as in the case of Sebastiano Serlio and Vincenzo Scamozzi, who is represented in this room in a painting by Veronese. Ancient ruins appear in the background of many portraits of the period, such as another painting by Veronese housed in Budapest. Classical reading material, libraries and the collecting of antiquities are the characteristic features of the Venetian world, as attested by Moroni’s paintings and the bronzes on mythological subjects shown here. 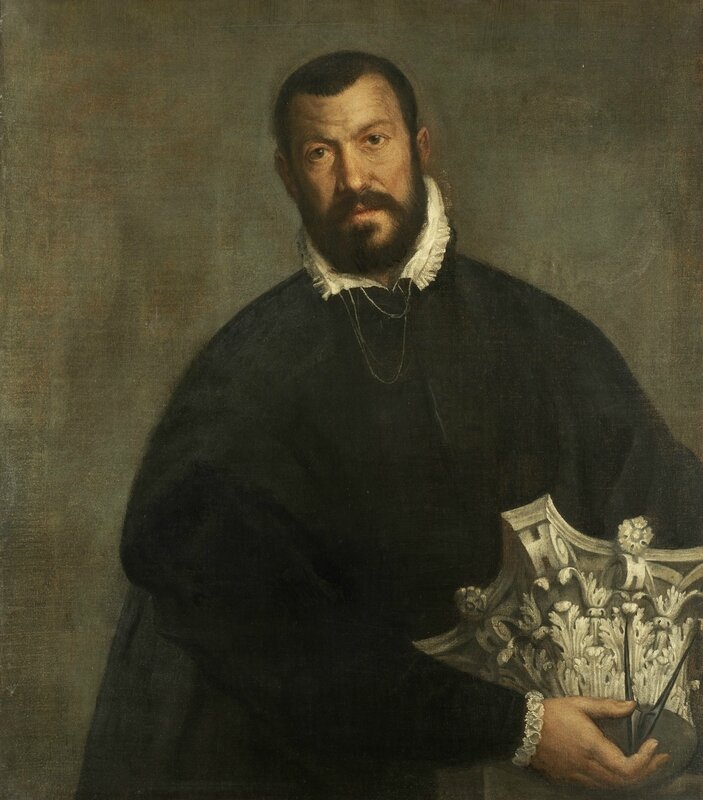 Beauty and melancholy of the Venetian Renaissance

The desire for urban beauty (room 1) achieved through classicism (room 2) is embodied in a broad variety of aesthetic types. The dream of youth was conveyed in portraits of melancholic young men (represented here by key examples by Giorgione, Bernardino Licinio, Giovanni Cariani and Lorenzo Lotto); in allegories of music, the highest symbol of aesthetic perfection in the Renaissance (represented by a picture by Cariani); and in the evocation of a utopian and dreamed-of antiquity expressed in Francesco Colonna’s Hypnerotomachia Poliphili (1499), undoubtedly the most attractive printed book of the Renaissance. The survey of Venetian painting focused on beauty culminates in this section on paintings of women. Key works by Palma Vecchio, Titian and Veronese develop the idea of beauty in the genre of idealised female portraits, which also extends to mythological paintings where the main subject is Venus, the goddess of beauty, such as Lambert Sustris’s Venus and Cupid and Veronese’s Venus and Adonis, on view here alongside its companion piece, Cephalus and Procris. Veronese’s spectacular Rape of Europe from the Ducal Palace in Venice, one of the most important Renaissance paintings, brings this selection to a close.

Midway between the image of female beauty and devotional painting, the iconography of Mary Magdalen was one of the most widely depicted by Titian. This room shows the three finest examples of the painter’s type of clothed Magdalen: a work executed for Cardinal Farnese and now in the Museo di Capodimonte in Naples; a picture possibly painted for Alfonso de Ávalos; and a painting that was in the artist’s studio when he died. The latter is one of the masterpieces from Titian’s late period, and legend has it that he died embracing it. 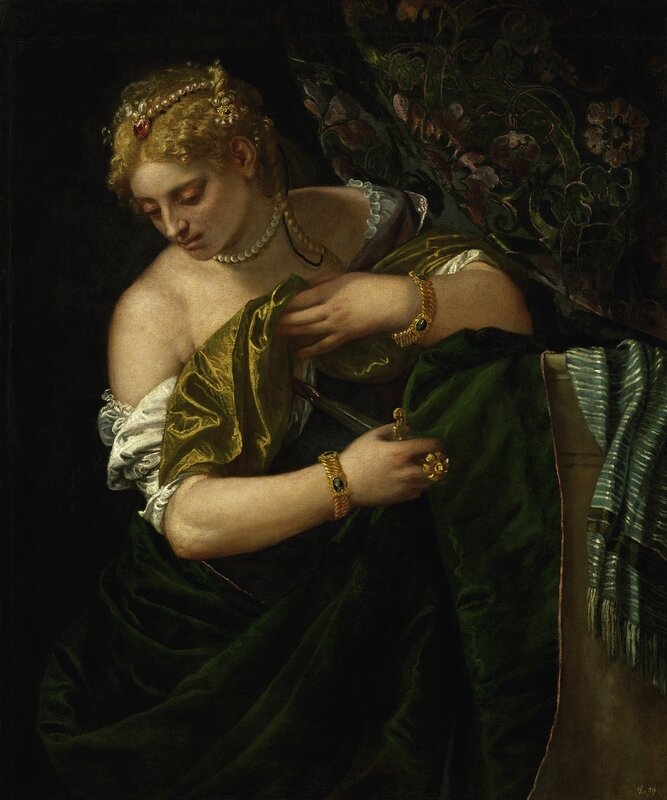 The glitter of power

The beauty created by Venetian painting was particularly important as an expression of the image of power, from two different perspectives. The first is the “glitter” of military power through its painted reflection in the characteristic armour worn by soldiers, of which there are key examples by Carpaccio and Titian. Viewers must have been fascinated by works of this kind, in which artists skilfully rose to the technical challenge of capturing the elusive gleam of metal. The second perspective, the representative significance of aristocrats’ palaces, is illustrated by two examples of architecture and painted decoration: the collaborative efforts of Titian and Giulio Romano in the Palazzo Te in Mantua, and of Palladio and Veronese in the palace of Iseppo da Porto in Vincenza. 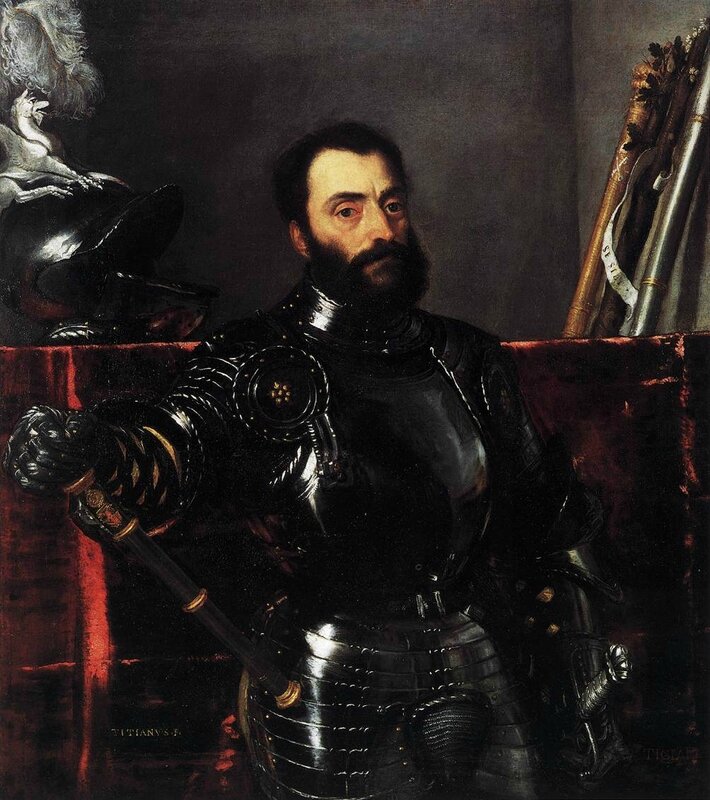 Theocritus’s Idylls and Sannazaro’s Arcadia are the literary basis for the last section illustrating how Venetian painting created beauty. Delightful, idealised depictions of nature provide settings for pastoral paintings on mythological subjects, such as those by Sebastiano del Piombo, Lorenzo Lotto, Palma Vecchio and others. But also for devotional paintings, such as that of Dosso Dossi and the marvellous Virgin and Child with Saint Catherine and a Shepherd Titian painted for Duke Alfonso I of Este during the early stages of his career. Jacopo Bassano’s magnificent pastoral scenes convey a more real image of nature in keeping with the agricultural interests of the Venetian patricians based in the terra firma, who found Palladio’s villas to be the highest expression of architecture. Decline of the Renaissance

The Venetian painting technique, which shunned drawing and focused on colour and “patches”, carried within it the seed of its own destruction. Towards the end of their careers, many of the artists who developed this concept of idealised beauty illustrated in the previous rooms in paintings on subjects such as melancholy, music, women, power and nature produced paintings in which violent chiaroscuro or “harsh smudges” became totally predominant – so much so that even today scholars continue to debate on whether Titian’s works are finished. This room examines this question and provides a comparison of late works by Tintoretto, Jacopo Bassano and Veronese. The drama of themes like the Passion of Christ, coupled with the self-awareness of a period that viewed itself as the “decline of the Renaissance” and the end of an era, did the rest. Tintoretto, The Flagellation of the Christ, c. 1585 – 1590. Vienna, Kunsthistorisches Museum

The destruction of painting

King Philip II was the keenest Titian enthusiast of the entire 16th century. He also owned the most significant collection of works from the master’s late period, as attested by those in the Museo del Prado and the monastery of El Escorial. Of the Escorial pictures, the dramatic Christ on the Cross, which is less known to the public and brings this exhibition to a close, is a masterpiece of his late period and an excellent example of what we have called the “destruction of painting”. Commentaires sur Renaissance Venice. The Triumph of Beauty and the Destruction of Painting at Museo Thyssen-Bornemisza