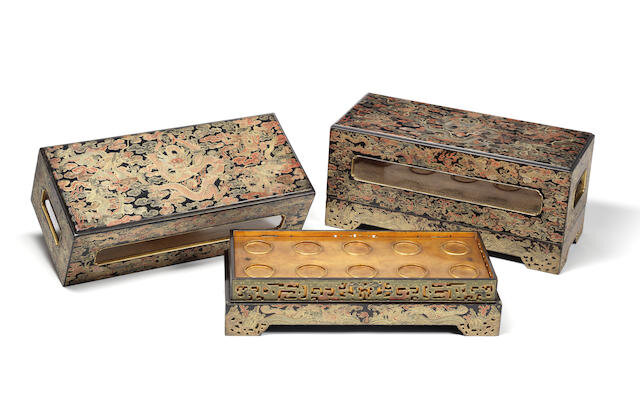 Each of rectangular form, the covers with gilt-wire mesh quatrelobed windows on each side, colourfully decorated in polychrome and gilt with a ferocious front-facing five-clawed dragon holding the flaming pearl enclosing the character sheng, surrounded by further eighteen sinuous three-clawed dragons in flight amidst lingzhi-shaped vaporous clouds and emerging from crashing waves and rockwork at the sides, the interior with gilt-lacquered trays set with ten circular divots, all carefully incised and painted in gilt, red and green colours above a black lacquer ground, fitted boxes. Each 53.5cm (21in) long x 23.5cm (9 1/4in) deep x 24.8cm (9 3/4in) high (6).

Note: The highly prosperous reign of the Qianlong emperor, combined with the Imperial taste for outstanding works of art in every field, allowed for the development of technical virtuosity, necessary to supply the exacting Imperial standards. These elements are all demonstrated in the very rare present lot, which was most probably made in accordance with the direct instructions of the Qianlong emperor.

The Imperial archives record in the 11th month of the 8th year of the Qianlong reign (corresponding to 1743), as follows:

By Imperial decree of the emperor: make a pair of boxes after the form of the polychrome kanhe (看盒) and following the style of the carved lacquer dragon and sheng box and cover...'.

The archives also record that the Qianlong emperor further ordered brass base instead of silver base cloisonné enamel cups, with gilt characters of wanshou wujiang (萬壽無疆), and with an inscription as noted above, to be made and placed in the boxes.

The pair of boxes was completed and presented to the emperor in 1746.

The sheng (聖) red lacquer box described above, most likely refers to a circular cinnabar lacquer box and cover, Qianlong and feilong yanhe (飛龍宴盒) ('flying dragons banquet box'), from the Qing Court collection, which is carved with a dragon bearing a sheng character, illustrated in The Complete Collection of Treasures of the Palace Museum: Lacquer Wares of the Qing Dynasty, Shanghai, 2006, pl.13.

The present lot of a very rare pair of polychrome and qiangjin lacquer rectangular sheng boxes and covers, is most probably the reference by the Qianlong emperor to a rectangular polychrome lacquer kanhe box, which served as an example in form.

Combined, the two boxes above provided the decorative style and shape for the pair of kanhe boxes, which was presented to the Qianlong emperor in 1746. The 1746 pair of boxes is most likely the pair of rectangular carved cinnabar lacquer boxes and covers with gilt-bronze wire-mesh windows, Qianlong six-character marks and four-character feilong yanhe (飛龍宴盒) mark, from the Qing Court collection in the Palace Museum, Beijing, illustrated in The World Rejoices As One: Celebrating Imperial Birthdays in the Qing Dynasty, Beijing, 2015, pp.298-299, no.186. This pair is carved with dragons pursuing the flaming pearl, similarly enclosing (as the present lot) the character sheng; each of the boxes contains ten cloisonné enamel cups bearing the characters wanshou wujiang (萬壽無疆), 'ten thousand longevity without limits'.

The wispy lingzhi-shaped coloured clouds,'qing yun' (慶雲), depicted on the present lot, represent the emperor's wish for longevity. The motif can be further interpreted as a pun on the word 'cloud', yun (雲), which is a homophone for fuyun (福運), 'good fortune'. In an agricultural society, the rain-bearing clouds would have been perceived as a benevolent omen, for the necessary irrigation of the crops. This motif was much admired by the Yongzheng emperor, who became in later life a devout Daoist, with many works of art produced during this period, decorated with this decorative motif; see for example the pair of doucai waterpots, Yongzheng marks and of the period, sold in these rooms, 2 June 2016, lot 12. As the Qianlong emperor was personally involved in ordering the production of such boxes and probably also the present pair, it is no coincidence that the design bore motifs admired by his father.

Compare also a related square qiangjin 'dragon and cloud' box and cover, Qianlong mark and period, from the Qing Court collection, illustrated in The Complete Collection of Treasures of the Palace Museum: Lacquer Wares of the Qing Dynasty, Hong Kong, 2006, p.151, no.110.