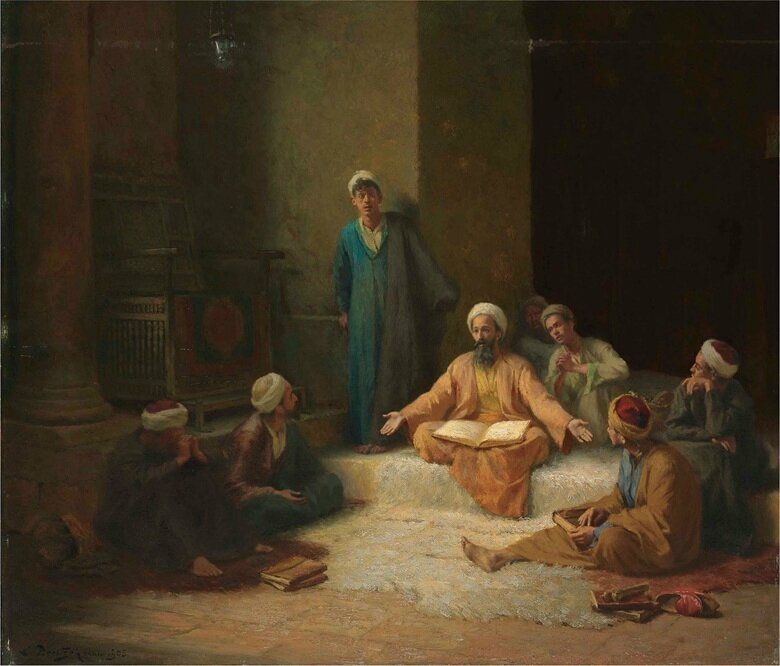 Note: Executed at a time when Ludwig Deutsch (see Lot 13) was moving from a photorealist to a looser style, the present work combines the best elements of both: the extraordinary attention to detail of the former, rendered softer and less austere by the latter, to create an overall picture of great drama and intimacy. The present painting is among the ones where Deutsch began to experiment with a technique influenced by Post-Impressionism, which would eventually come to characterise his late style. Although he continued up to 1910 to produce exceptionally detailed and intensely observed paintings, he was also attracted to a more painterly approach to his subject. Thus in the present work, Deutsch contrasts a precise observation of some of the objects with broadly described, and muted harmonies of grey and brown, which dominate any detail of motif in the foreground.

Together with these stylistic changes in the later years of Deutsch's career a different subject matter emerged. The artist moved away from depictions of the ruling classes, clothed in richly coloured and textured materials, and set in broader layered architectural surrounding. Instead, as in the present work, he represents the day-to-day activities of society, using simply clothed figures in humble, but distinctly Arab, interiors.

The artist is thought to have visited Egypt as many as five times between 1883 and 1904, where he completed studies from which he drew inspiration on his return to France. He had several studios in Paris, where he kept a vast collection of objects collected on these travels, such as costumes, furniture, arms, pipes and ornaments.

In the present painting Deutsch uses the architecture to frame the group of figures attending a Koran school. The inky shadow of the interior contrasts with the light emphasizing the central figure of the cleric, his arms opened in a solemn gesture. The artist’s most refined works are often conceived around a central figure, about whom pivots the whole crowd involved in the painting. This central figure embodies the spirit of the whole: immobile, grave and emanating a powerful sense of mystical solemnity. The costumes of the various figures stand out in vivid complementary ochres, blues and greens, and lend accents to the whites of the turbans.

The study of the Koran plays a major role in the upbringing and spiritual development of a Muslim. The spirituality of the Orient fascinated the artist. Here the artist has purposefully populated his composition with only the most incidental of objects -- a chair, a simple pair of shoes, some books- to focus instead on the overall atmosphere.