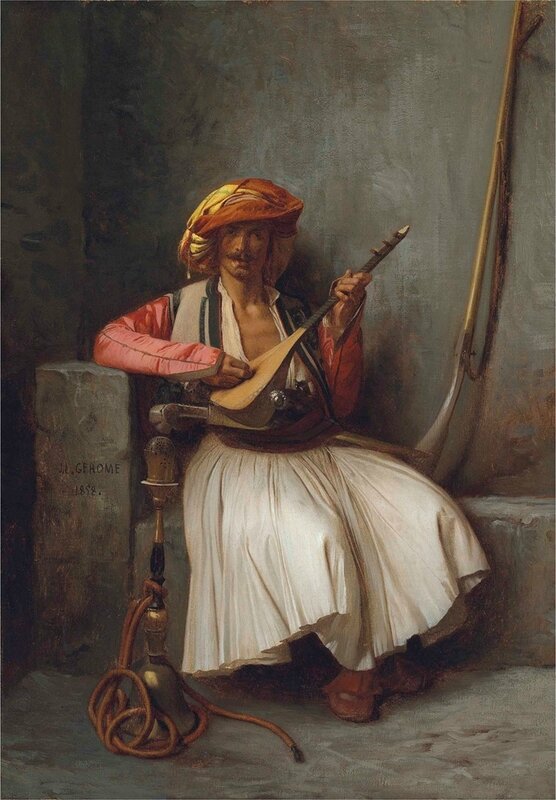 Note: Gérôme was an indefatigable traveller. He seemed always to be on the go, even into his seventies. They were often long trips, sometimes of several months. One wonders how he got so much work done. When his studio assistant, the sculptor Decorchemont, suggested he should slow down a bit, he replied, 'You really think that I have the time to slow down at my age?'.

Gérôme's most important teacher was Paul Delaroche (1797-1856), who was a supreme master of stance, posture, placement and contrapposto. Delaroche taught Gérôme how to see and project the frame and muscles under the skin and clothing of figures to show the tensions of the inner balance that supported a pose. It is that developed talent which underlies the strong presence of the figure in this picture. From the 1870s single-figures in Oriental costumes and settings becomes a steady part of Gérôme's production.

The present figure can be identified as an Arnaut, a term often used for an Albanian soldier, an irregular soldier in the Turkish army. They were recognisable by their pleated skirts, somewhat of a national Albanian costume. After Egypt became independent from Turkey, there were evidently plenty of them in Cairo who earned a living by various jobs: as guards, animal keepers, and models for foreign painters.

Gérôme's first oriental costume picture was of an Arnaut in bright sunlight with a rifle on his shoulder, leading a corvé of recruits across the desert, perhaps for service in the army or for work on the Suez canal. It is carefully painted, with strong plein air effects -- particularly complex on the Arnaut's skirt; for this difficult effect, Gérôme worked from a photograph of the skirt shot on a sunlit roof, perhaps that of his own house.

In its simple, straightforward subject matter -- with neither a story nor a moral -- this is a modest work; but it perfectly illustrates the attention to detail that defined the artist as an 'ethnographic' Orientalist painter, and is animated by the engaging pose of the figure. This, combined with the finesse of the detailing are familiar properties in Gérôme's studio collection, with loving attention paid to the silvered decoration on the pistol handle and the glints of light on the copper of the hookah. The costume gets great attention too; the colourful shawl banded on the soldier's head, the especially fine sheen of the sleeves and the pleated Arnaut skirt, which the painter never failed to draw and paint freshly throughout his life, always with a different fall of the pleats, and different modulations of light and shadow on the multitudinous folds.

We are grateful to Graydon Parrish for his assistance in authenticating and cataloguing the present lot.